“Seduction Of The Innocent” 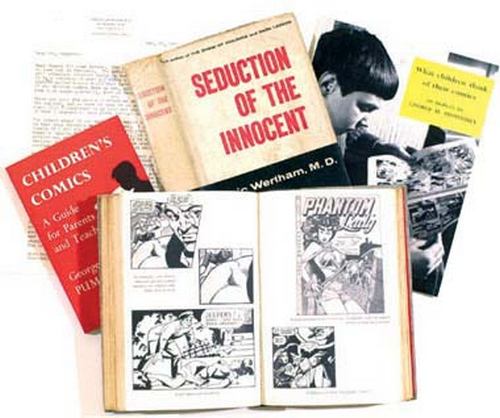 “Wertham’s writings on comic books as a cause of juvenile delinquency were very influential in the senatorial investigation into juvenile delinquency in 1953, and SEDUCTION OF THE INNOCENT went on to become a best-seller, outraging parents across the nation.
Public outrage over the content of comic books led to some spineless publishers of the time adopting what is probably the most restrictive code of censorship for a medium in American history, the COMICS CODE (which can be read in its entirety on Wikipedia). While it was never an explicit requirement to adhere to the comics code, after the code was introduced, distributors would not carry books that didn’t have the Comics Code seal.
Following the adoption of the comics code, comic books became more puerile and less interesting for a long time, and many comic book publishers went out of business (some have argued it was at least partially a ploy by the larger comic book publishers to drive their smaller competition out of business).
Some of the rules of the comics code have to be seen to be believed. Example:
“Policemen, judges, Government officials and respected institutions shall never be presented in such a way as to create disrespect for established authority.” …
I highly recommend reading it. 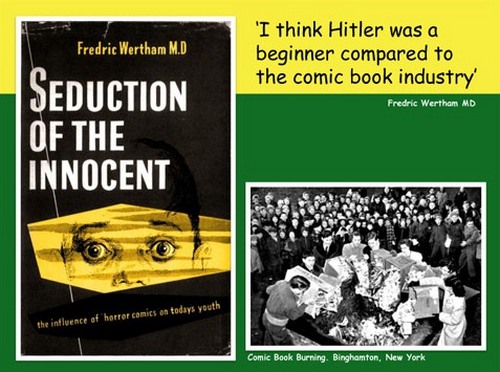 So, while the comics in Seduction Of The Innocent were not necessarily censored themselves (there were some organized comic book burnings around that time), they were directly responsible for inspiring one of the most repressive campaigns of censorship in American history. It crippled creativity in comic books for many years. Some comics are STILL published with the comics code on the cover today!
Obviously, many of the below comics are not intended for children. While all of them were probably read by children, they were not necessarily the intended audience for them as far as the cartoonists were concerned. Harvey Kurtzman’s Frontline Combat, for example, was written with a military audience in mind, and Kurtzman frequently received fan letters from men in the military.
A big part of the reason comics were hard to defend at the time was the popular, pea-brained notion the general public had that comics as a medium was inherently intended for children. This notion had a lot to do with why children were ending up reading material intended for adults.
It has always been a lot easier for some parents to blame a convenient scapegoat like comic books, video games or bubble gum for their childrens’ problems than it is to blame their own parenting shortcomings. 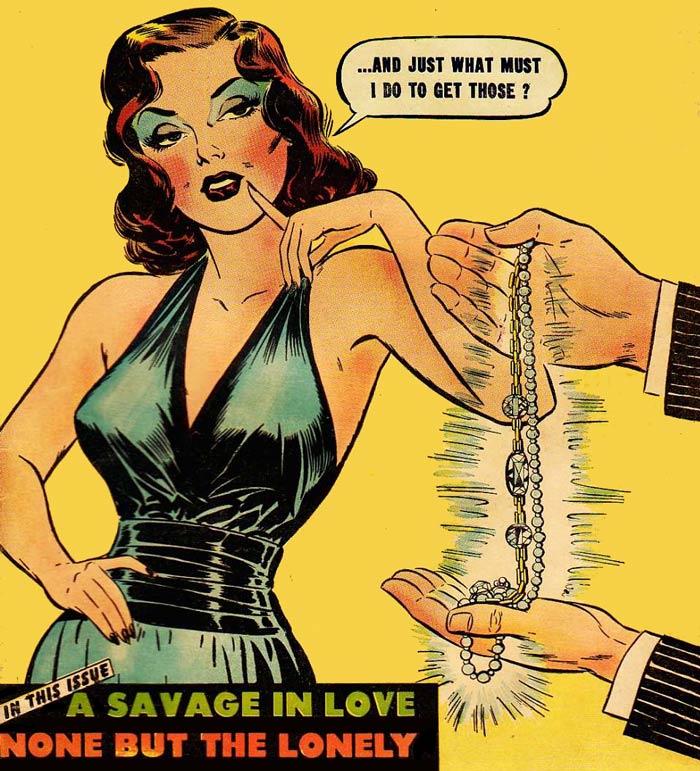 Fortunately, today comics seem to have finally found mainstream acceptance among intelligent adults in the US. But it was a really long haul. It was made a lot longer than it should have been by the repressive Comics Code.”

(the above text is printed by permission) 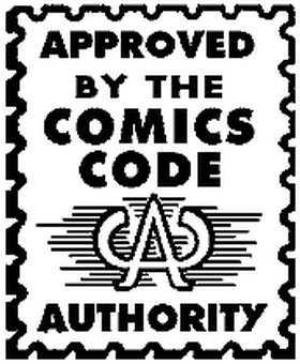 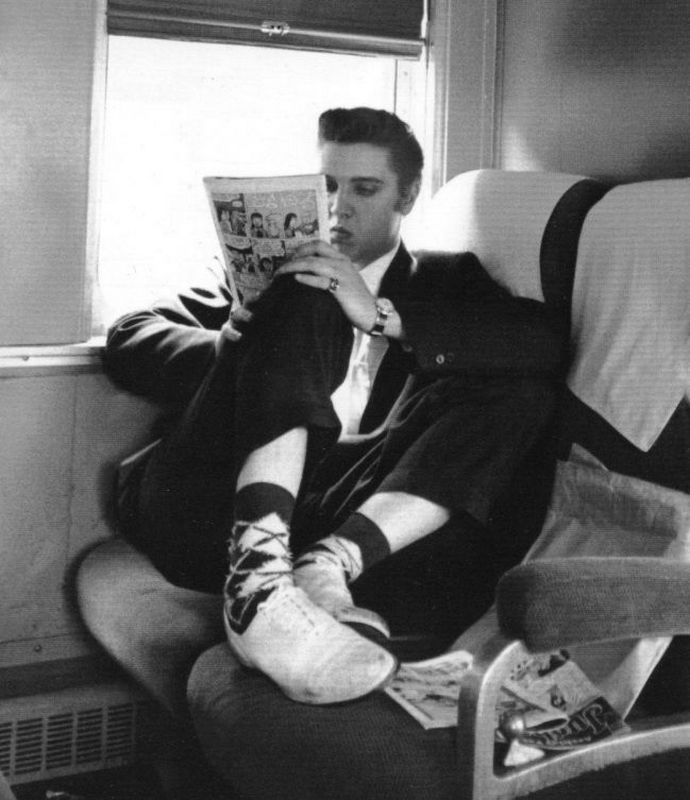 What follows is a collection of comicbook-covers, published for the most part during the first half of the 1950’s in America. Many of them are mentioned in Wertham’s Seduction book. Others are my own choice. Perhaps in this day and age, the material displayed here is considered ‘tame’. But remember: the 1950’s was a very different time to live in. There’s mention of sex & drugs, but no Rock ‘n’ Roll as of yet. Adult themed comics were already history by the time Bill Haley and Elvis broke thru big. Hence Elvis seen pictured reading ‘kiddie stuff comics’ when Wertheimer photographed him on the train back to Memphis, in July of 1956. There were simply no kool comics left to buy on most newsstands, and certainly not on train stations deep down South, back in 1956! What was available, for the most part, was romance, cute animals, and Western type comics, starring Roy Rogers, Gene Autry and Rin Tin Tin the wonder dog. 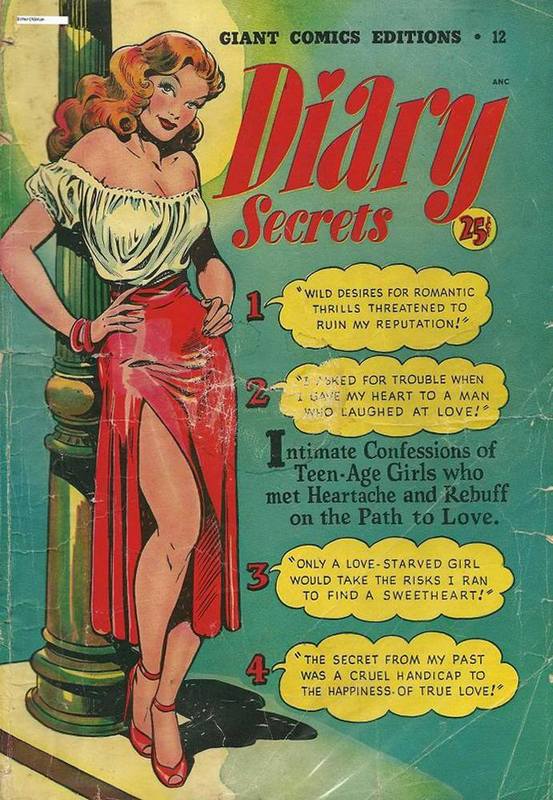 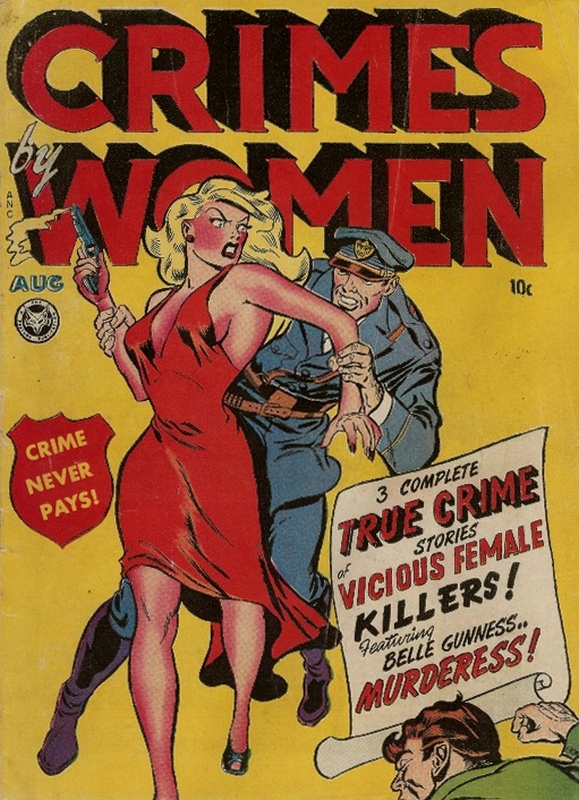 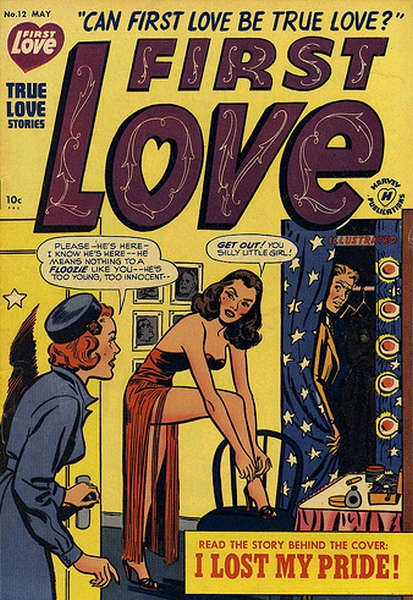 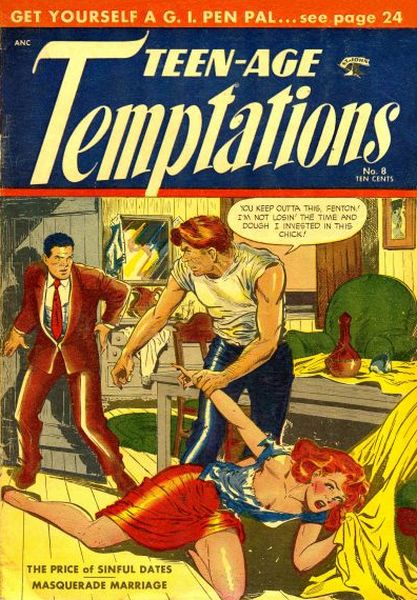 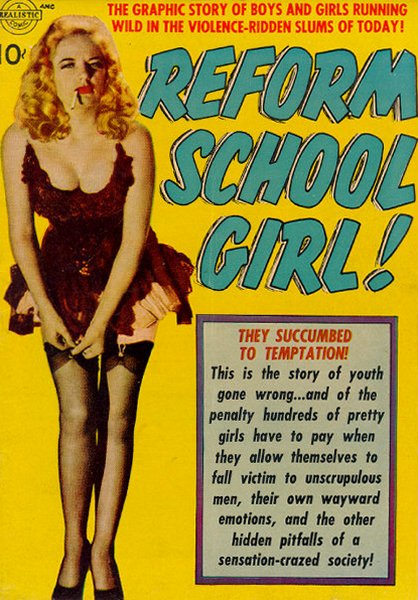 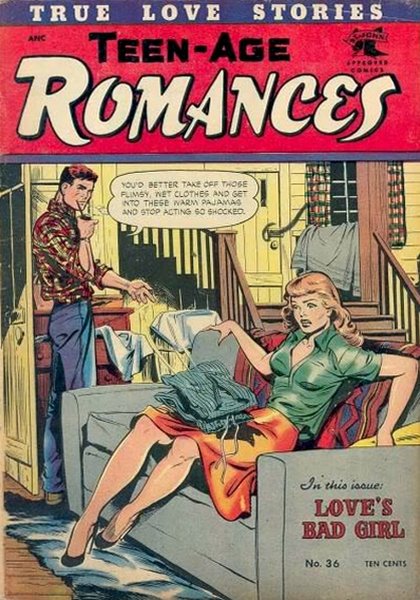 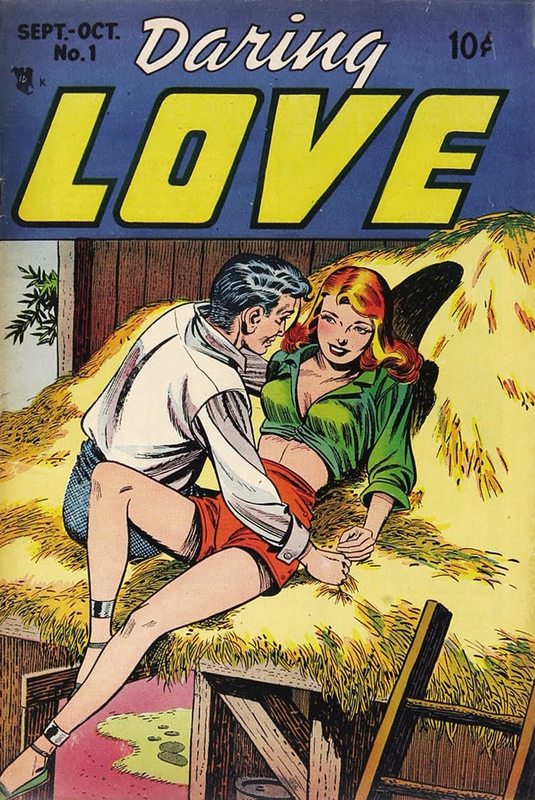 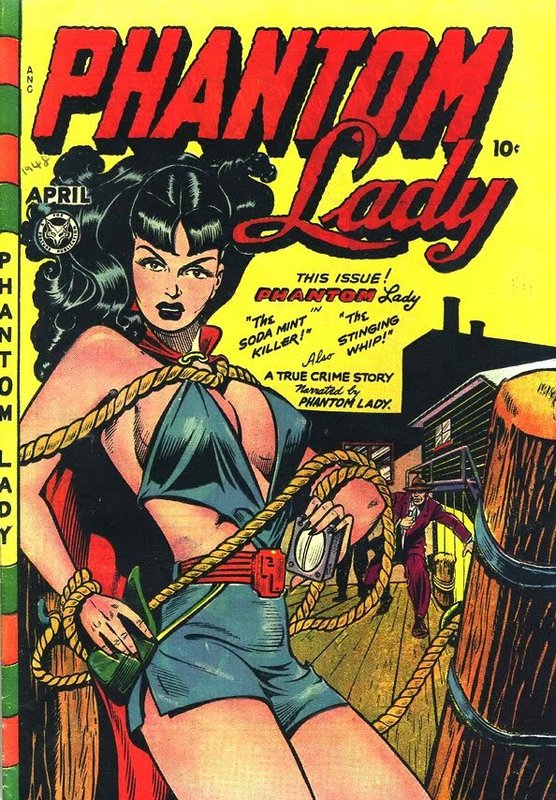 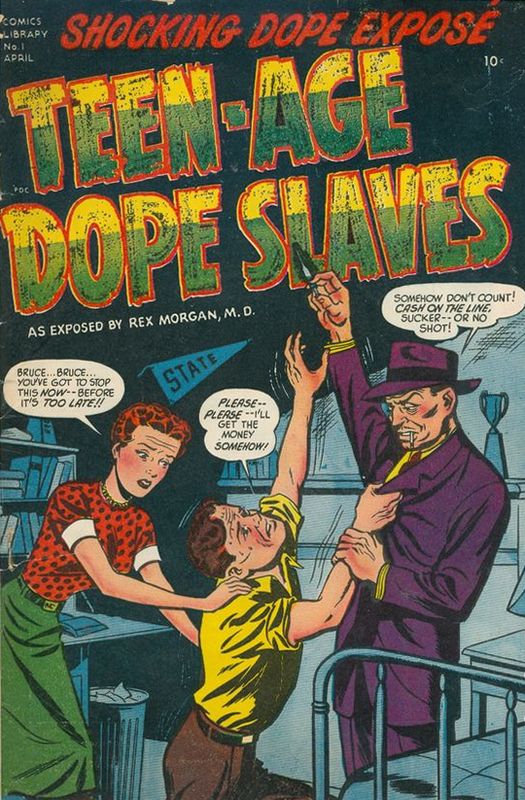 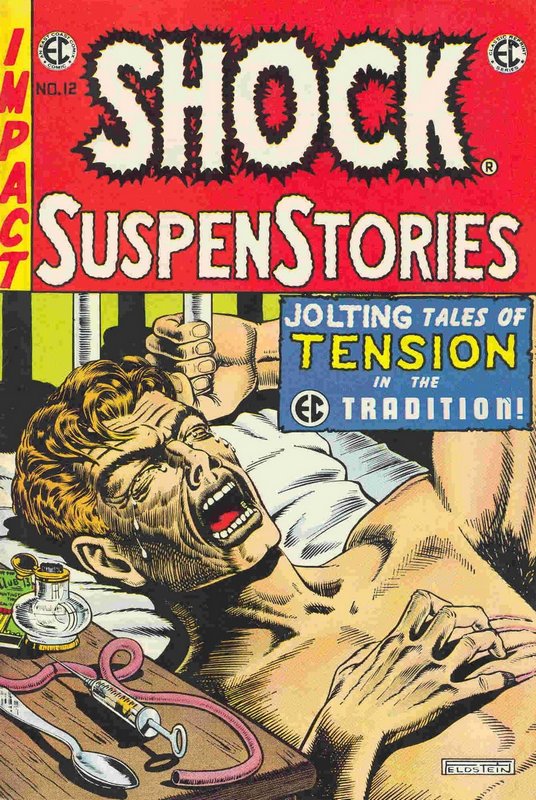 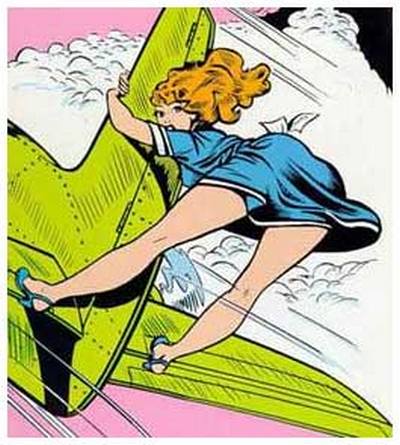 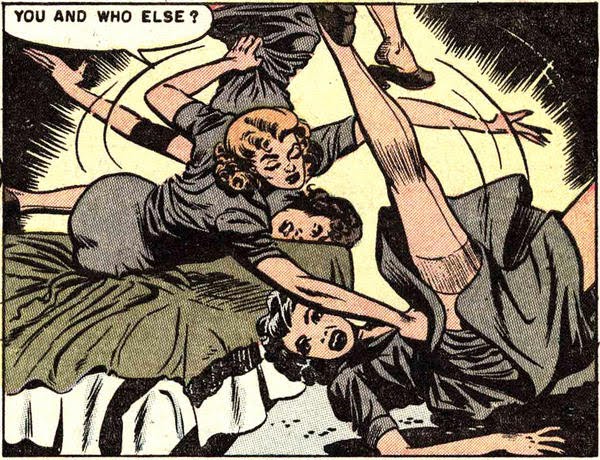