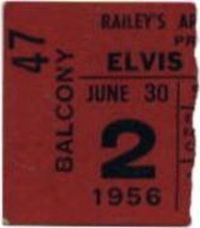 “He stepped out wearing a bright green jacket, which, against the red curtain, made him glow like a traffic light”.

There had been ample time to kill between the two shows at the Mosque. After the grand finale of the afternoon performance, closing the show with the soon to be recorded ‘Hound Dog’, he rushes off stage into the wings, while the crowd screams out for more. But they have to wait for his evening show if they want to see more of him! Elvis doesn’t do encores. A policy that wouldn’t change ’till his very last concert, 21 years later. “Always keep the crowd begging for more!“, the Colonel had told him when they had started working together, back in 1955. 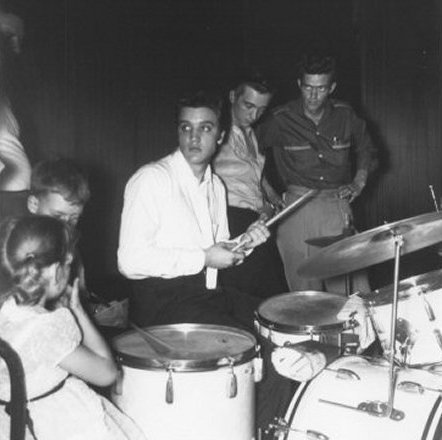 Time for yet another interview
After having changed into a fresh shirt and pants, Elvis re-enters the stage, and sits down behind a drum kit. Somebody offers him a soda, he gladly accepts.
In front of the stage a young gentleman takes place and introduces himself as a reporter from a local Richmond newspaper. Elvis is asked if it’s okay for the reporter to climb the stage and do an interview with him? “Sure thing!”, Elvis answers politely, while he continues playing a little drum shuffle. The questions that follow are polite ones. This reporter from the south is very different from the ones he’d met up with in New York, no insinuations about him being in part responsible for juvenile delinquency, and neither will the question be raised if he smokes pot, or uses a handgun for threatning pushy people who come to close for his comfort.

Screams from the lobby
After nearly an hour of friendly answering the reporter’s questions, Elvis moves away from behind the drums, and goes into the direction of the orchestra pit, where he once again takes a seat, but this time behind the piano. The interview continues a little while longer, but is abruptly stopped when the concert hall doors are opened, and the noise, made by hundreds of fans for the 2nd show, waiting in the lobby, reaches the stage. Time to pack it in, and move away into the direction of backstage. 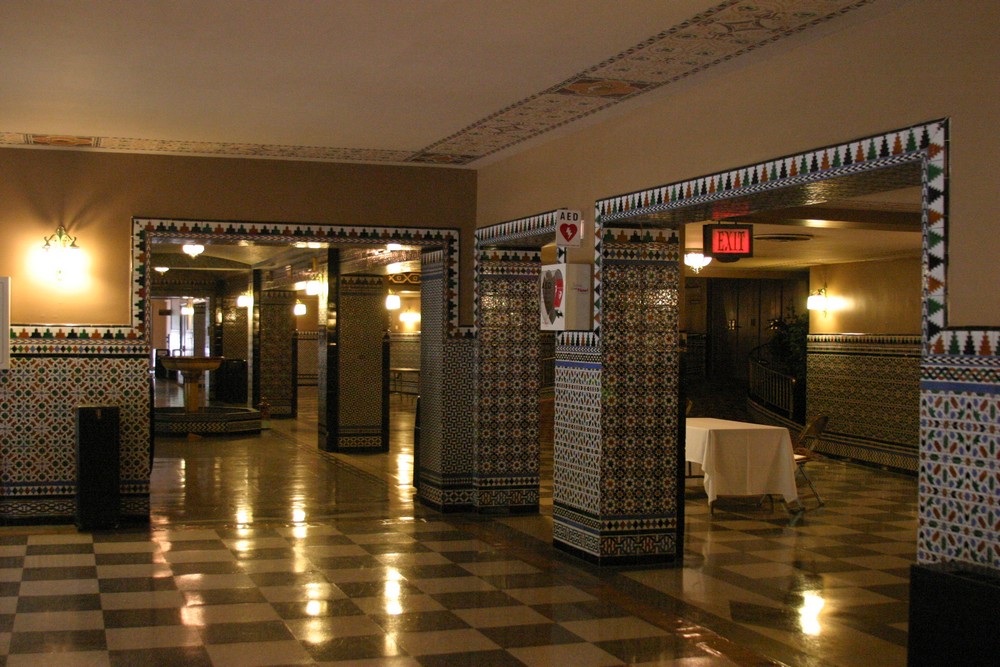 Here we get an impression of the beautiful lobby and stage of the Mosque Theatre in the present day.

With thanks to James V. Roy for making these pics available to us! 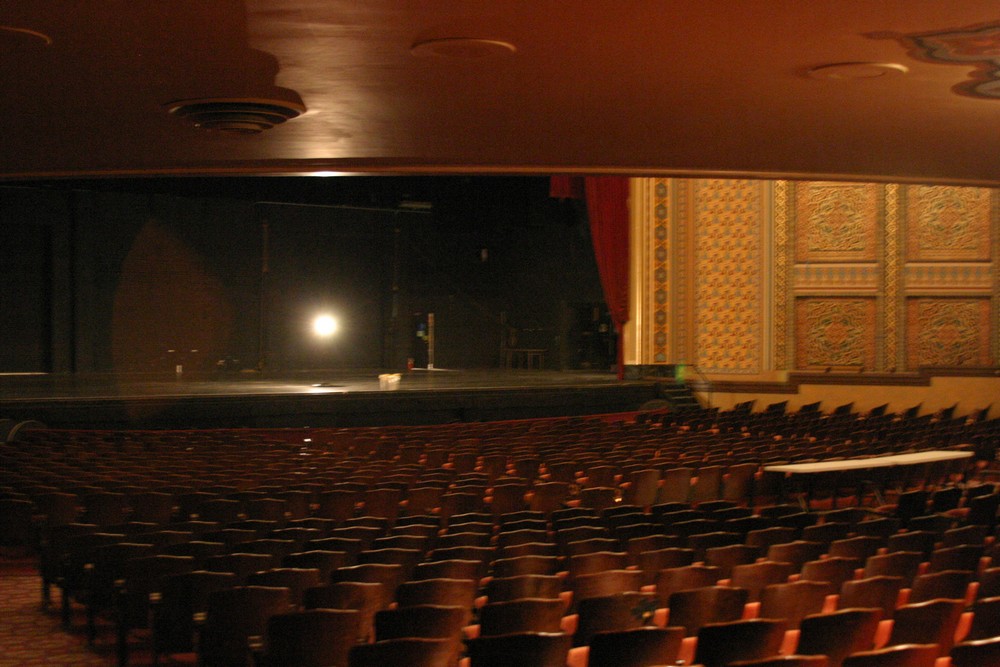 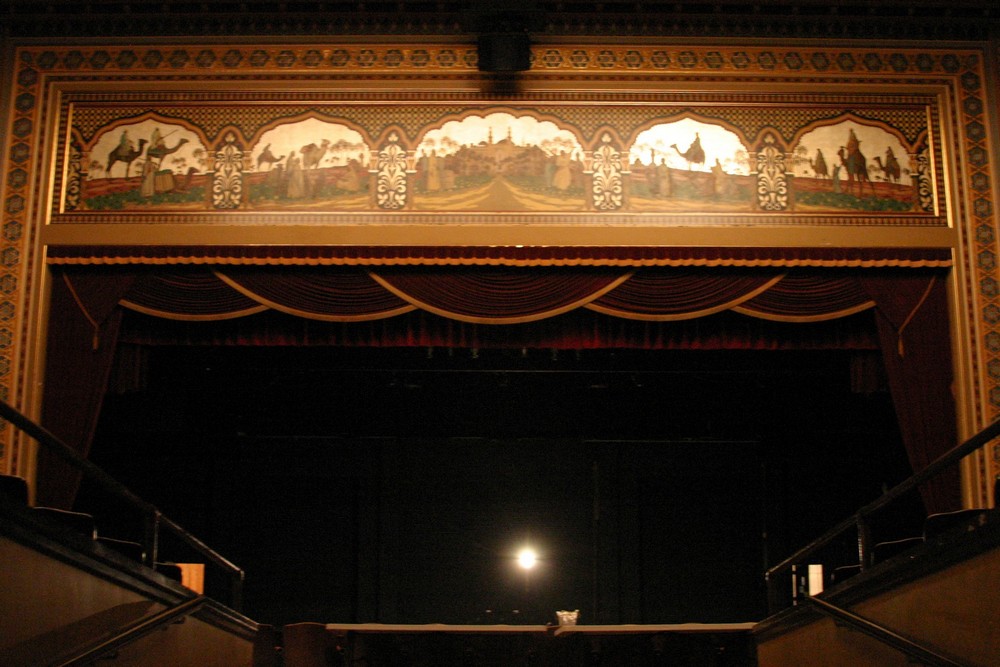 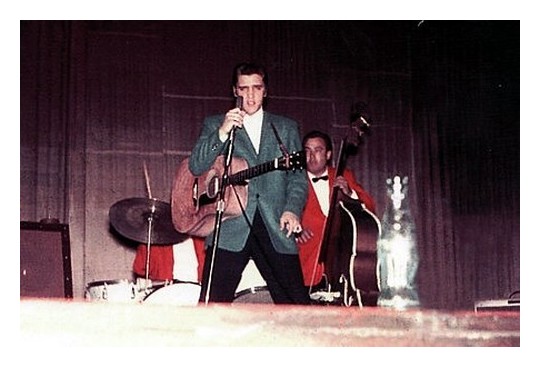 Where’s Elvis?
For the next hour and a half, nobody knows where the star of the show is. Scotty, Bill and DJ are not worried. They’ve gone through this situation many times before. Less than 3 minutes before the intermission ends, the Memphis Flash, oozing cool in a bright green jacket, black pants and white buck shoes (cleaned and polished for the evening show) stands ready in the wings. It’s showtime again!

The crowd erupts when Elvis takes position behind the mike, sweeps his hair backwards, rotates his famous hips in one single move, and belts out “Well, since my baby left me, …”. 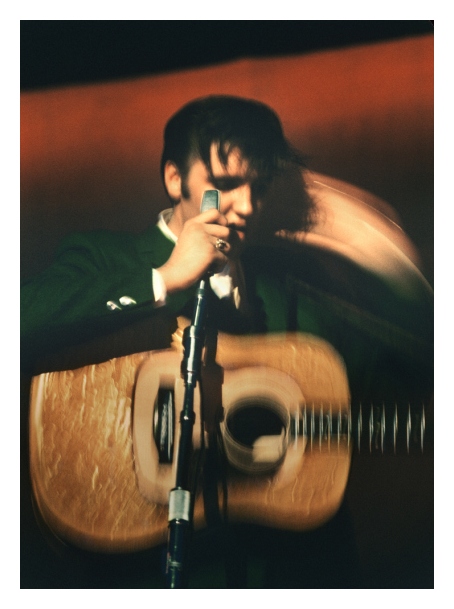 Six more songs will follow that evening. And just like during the afternoon, Elvis ends the show with an amazing rendition of ‘Hound Dog’. He’s using up all his stage movements and gimmicks, bringing the crowd into a complete trance for over five explosive minutes! 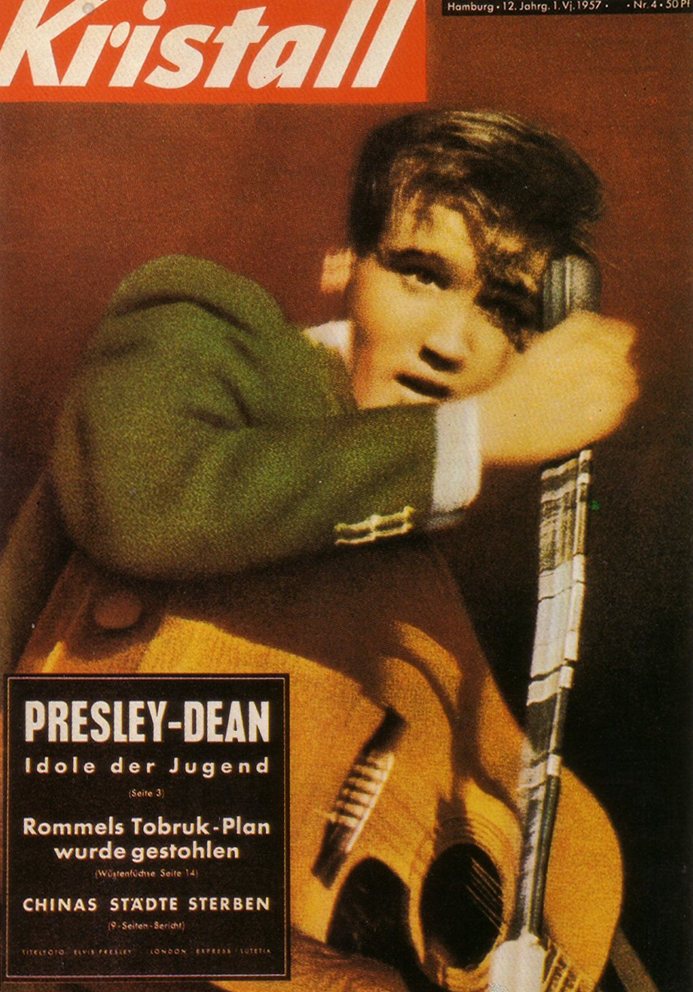 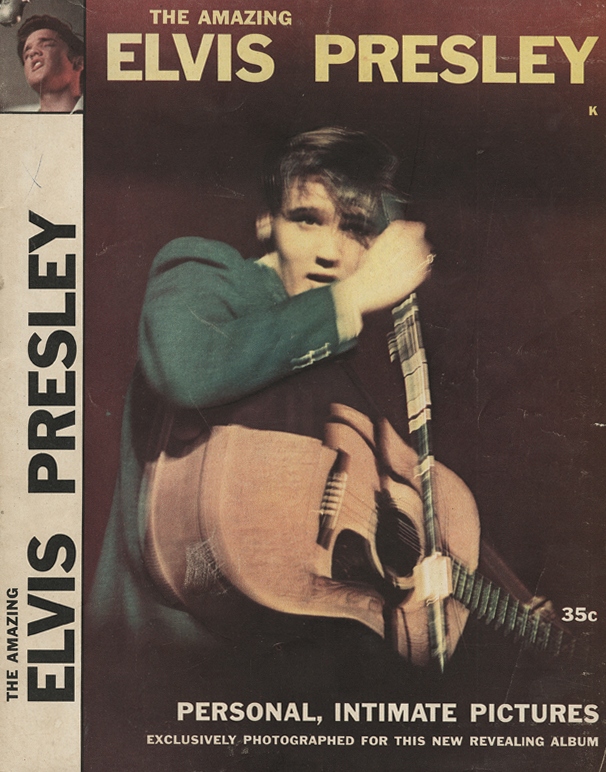 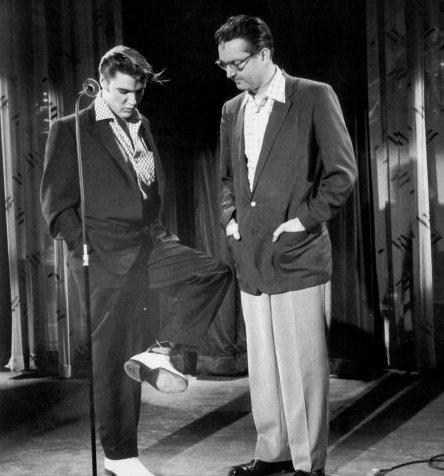 Before most girls return back to earth, the hero of the night is on his way in a taxi to the train-station. The nighttrain for New York will leave shortly. Tomorrow, Steve Allen awaits the new singing sensation for a guest appearance on his television show.
While over at Audubon drive, Gladys has yet another sleepless night … 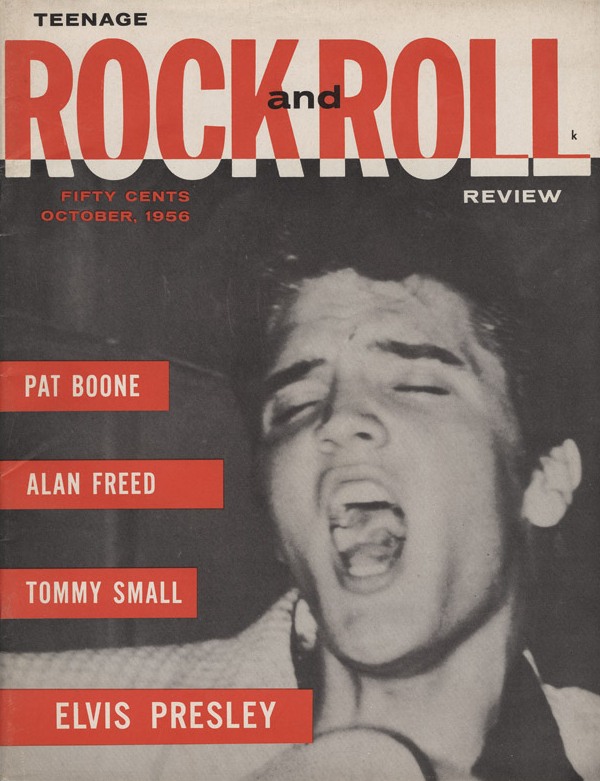 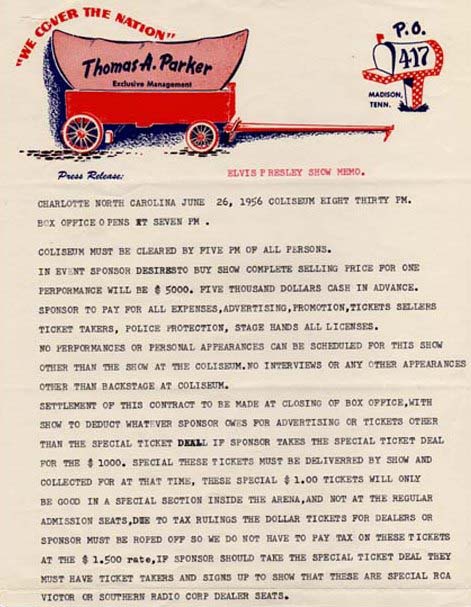 To the far left one of the earliest Rock ‘n’ Roll teen mags on the newsstands,
from 1956. The Elvis photos inside were all by Al Wertheimer.

And to the left: If you want Elvis to play your venue, here are the strict rules! Correspondence from the Colonel, shortly before the Richmond shows at the Mosque. 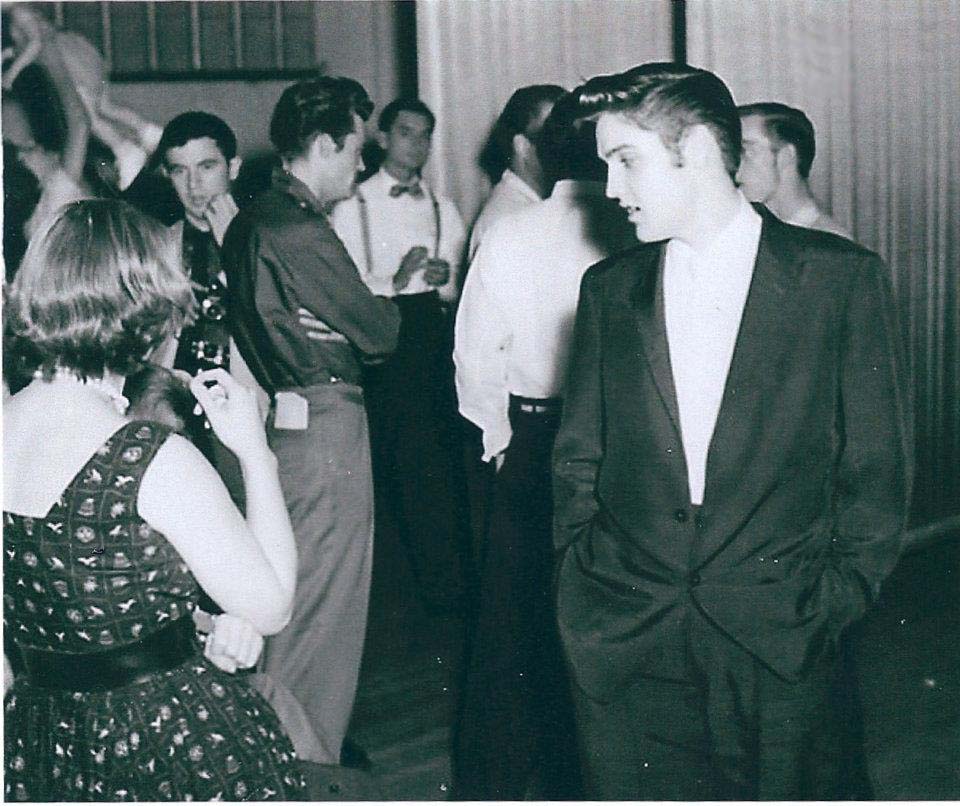 To conclude our Richmond ’56 Revisited trilogy, here’s an interesting photo from that day. In the upperleft corner we see the man responsible for some of the coolest and most wellknown pictures of Elvis in the 50’s: Alfred Wertheimer.

As a sidenote: when we launched Echoes Of The Past, back on April 1st of this year, we did so with PART 1 of Richmond Revisited.
And for our little 50th anniversary topic it only seemed fit to pay Richmond our final visit! 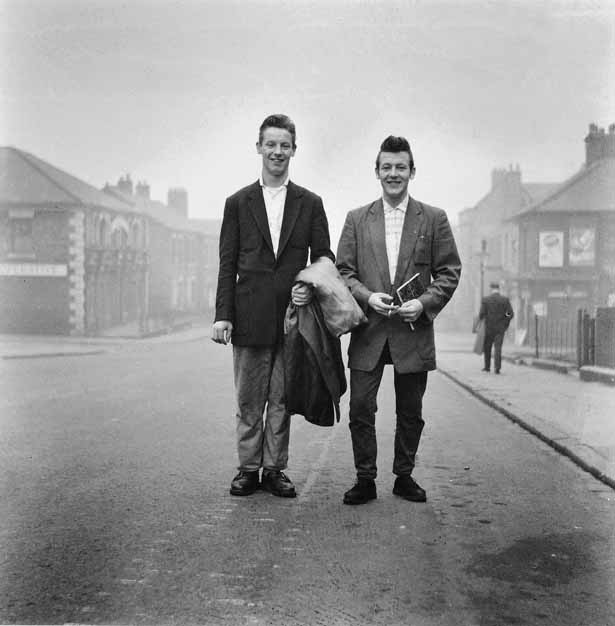