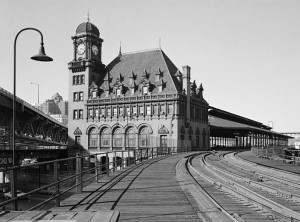 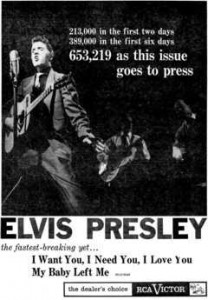 It’s 8 o’ clock in the morning when Elvis and his cousins Gene and ‘Junior’ set foot on Main Street trainstation’s platform. After a long night train journey that had begun in New York the previous night, the three finally arrive in Richmond VA.

Photographer Alfred Wertheimer awaits them. He’d arrived from New York a few hours earlier that morning. After his succesful photo coverage of Elvis, a few months earlier, during a guest appearance on Stage Show, RCA Victor has asked Wertheimer back to do some more photo shoots of their new singing sensation.

On June 29 Alfred finds himself in the old Hudson theater in NY, while Elvis rehearses for the upcoming Steve Allen TV Show, scheduled for broadcast on the first of July. It’s there, at the Hudson, where Al picks up the news of Elvis playing gigs in Richmond the following afternoon and evening. A great opportunity to cover Elvis in concert in familiar surroundings in front of his most loyal fan base. 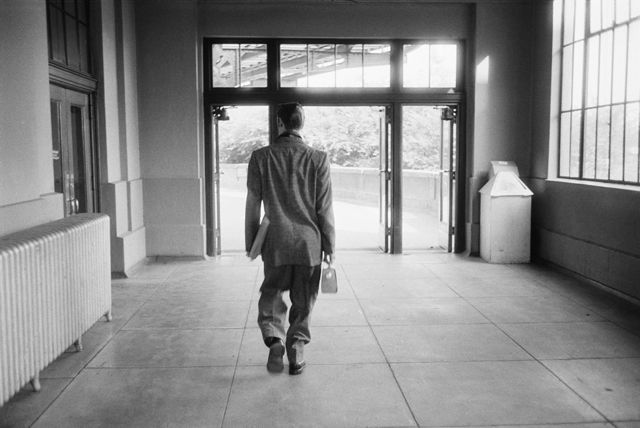 While passing thru the station, Elvis turns on the RCA portable transistor radio he carries with him. It’s a gift from the record company. The C&W sounds echo loud against the concrete floor and walls. 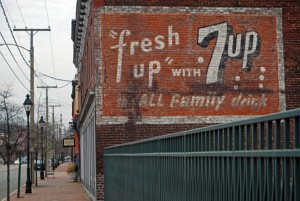 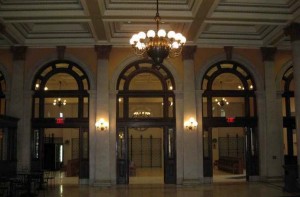 They pass by a large 7-Up sign on a brick wall, just outside of the station entrance, on their way to a Taxi stand. 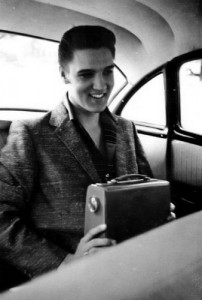 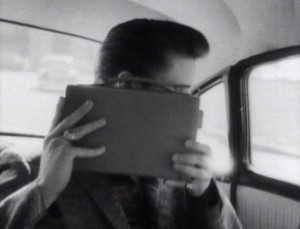 Elvis instructs the driver to take them to the Jefferson Hotel. Elvis sits in the back, and Al, with his camera clicking away, up front next to the driver. Cousins Gene and Junior follow in a 2nd cab. 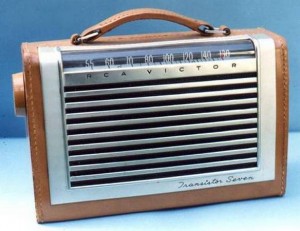 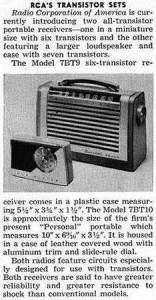 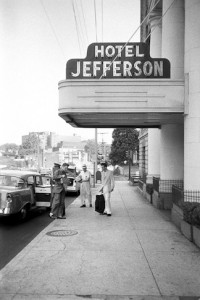 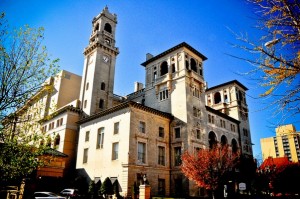 The Jefferson is a ‘Grand’ old hotel, build in the 1800s. A Southern reminder of days long gone by. 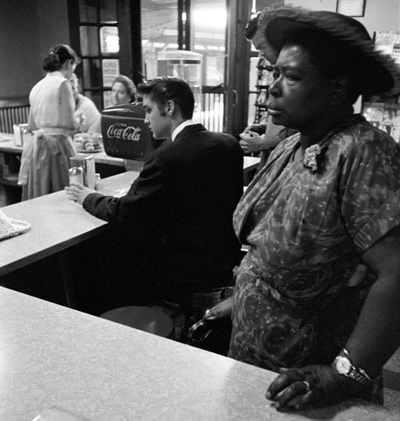 After having checked into the hotel, Elvis and cousin Junior visit the restaurant for breakfast. Gene, meanwhile, is off in a taxi again to pick up Elvis’ local ladyfriend and to escort her back to the hotel. 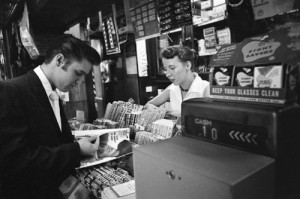 After breakfast there’s time for browsing thru the cafetaria magazines rack. He picks up a copy of Modern Screen magazine, gracing Debbie Reynold’s face on the cover. Inside there’s an article & pix about him. It will come in handy, when later that day he uses it to introduce himself to a young lady working behind the counter of the hotel coffeeshop … It’s June 1956 all right, but not everybody yet is familiar with the new star’s face! 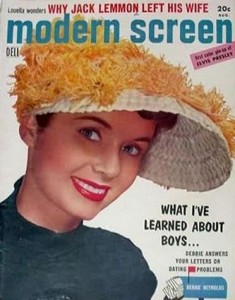 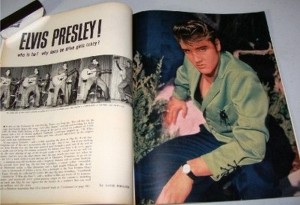 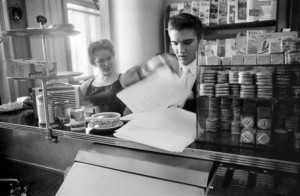 Gene has returned with Elvis’ blonde ladyfriend and walks her to the hotel room, on the 4th floor, where Elvis is comfortably resting for a couple of hours. In the afternoon they both leave the hotel room and visit the coffee shop downstairs. Elvis is already dressed up in the suit, shirt and shoes he’ll wearing during his first performance later that day at The Mosque.
It’s there where he will meet up with Colonel Parker, Tom Diskin, his musicians: Scotty Moore, Bill Black and DJ Fontana, and The Jordanaires. 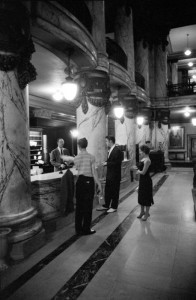 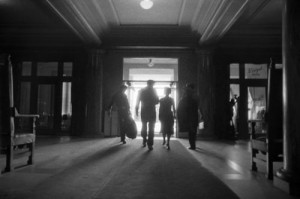 Around 4 o’ clock in the afternoon the group of four (Elvis, the blonde, Gene and Junior) order a taxi to drive them to the Mosque. Showtime is 5 pm. But Elvis won’t appear on stage ’till an hour and a half later …

… while the crowds found their way to the venue. 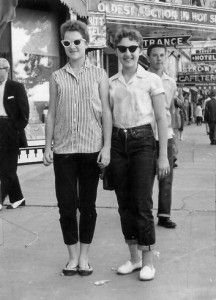 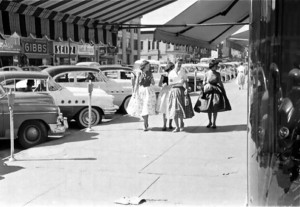 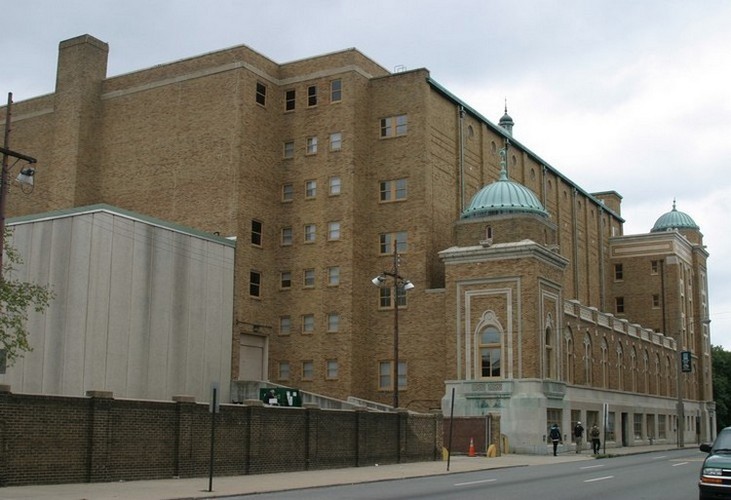 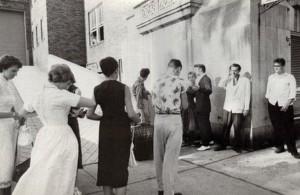 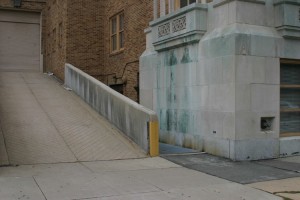 Shortly, before walking up to The Mosque stage door, at the end of the ramp, some of the more mature Virginia girls slip little notes to Elvis carrying their names and telephone numbers. These will come in handy next time he will visit Richmond. A few hugs left and right, and while in the company of his two cousins, Gene and Junior, and D.J. Fontana, Elvis walks up the ramp to enter the theater.

TO BE CONTINUED IN PART 2

All Photos featuring Elvis Presley are copyrighted by A. Wertheimer.
Color photography The Mosque by J.V. Roy