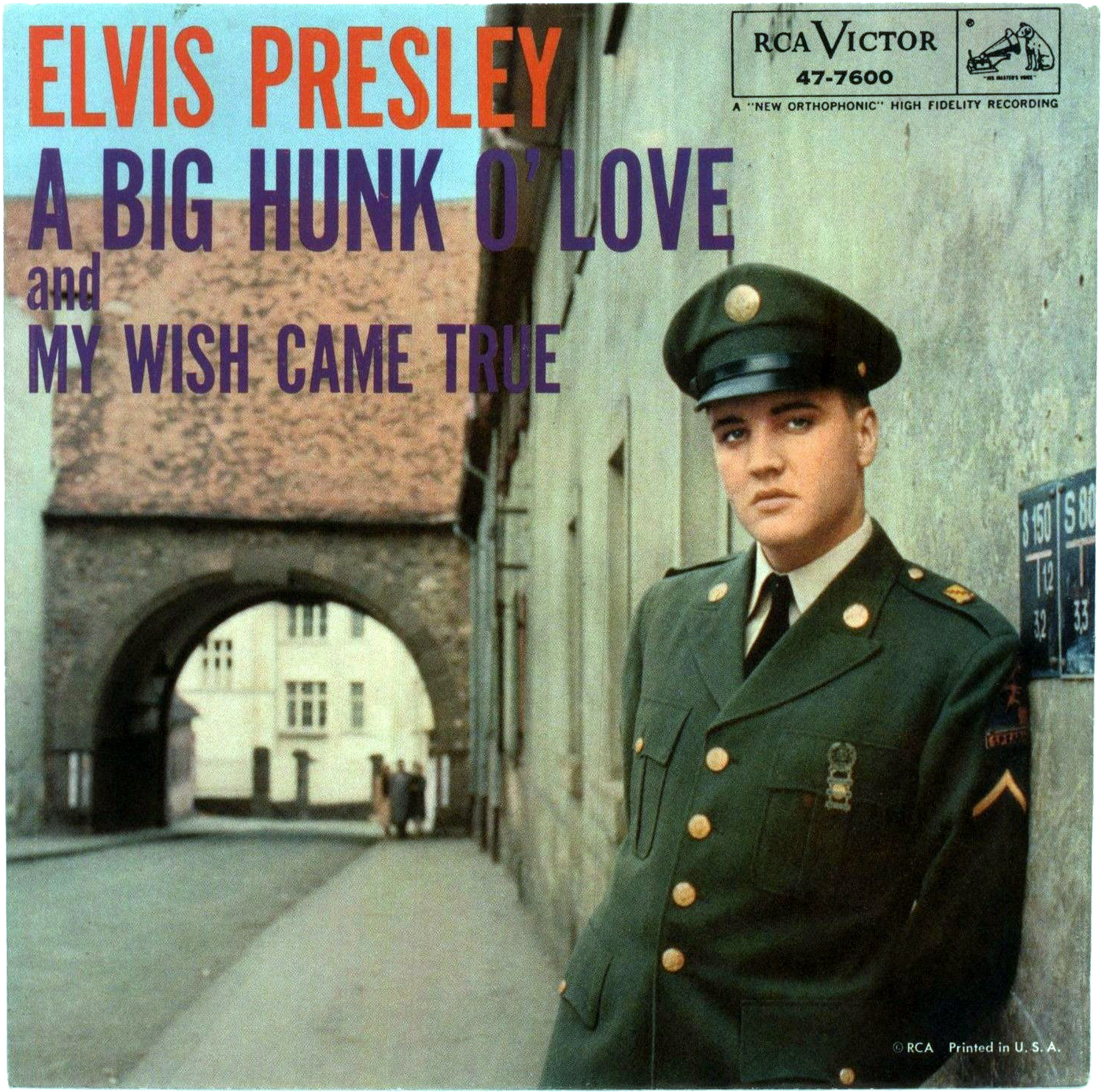 Elvis recorded A Big Hunk O’ Love a full year before it was released on single in late June 1959. This was the last 45 that was released during Elvis’ stay in the army. The song would reach Billboard’s number 1 spot in August of that year.

The session that produced A Big Hunk O’ Love, was Elvis’ first without loyal buddies Scotty and Bill. Also the photo that was chosen for the single’s cover, was different when compared to the studio shots that had appeared on most of Elvis’ previous picture sleeves since it was shot on location in Bad Nauheim, the small German village Elvis called home for 17 months.

Over the years, more posed shots from the same day have surfaced. But even though professional photo shoots were quite uncommon during Elvis’ army years, the Bad Nauheim shoot most certainly wasn’t well-documented: both the name of the photographer and the exact date of the shoot are unknown.

So far, 16 different photos from that day in March 1959 have surfaced. These are presented in this topic in the best possible quality.

Some of the photos are in color, others in black and white. The reason for this might be that more than 1 photographer was on duty that day, a thought that seems to be strengthened by how Elvis appears to be focusing on different photographers in certain photos.

Do more photos exist? Probably.
If anybody is able to add missing pics (or existing pics in a better quality), please leave a message below. Danke schön. 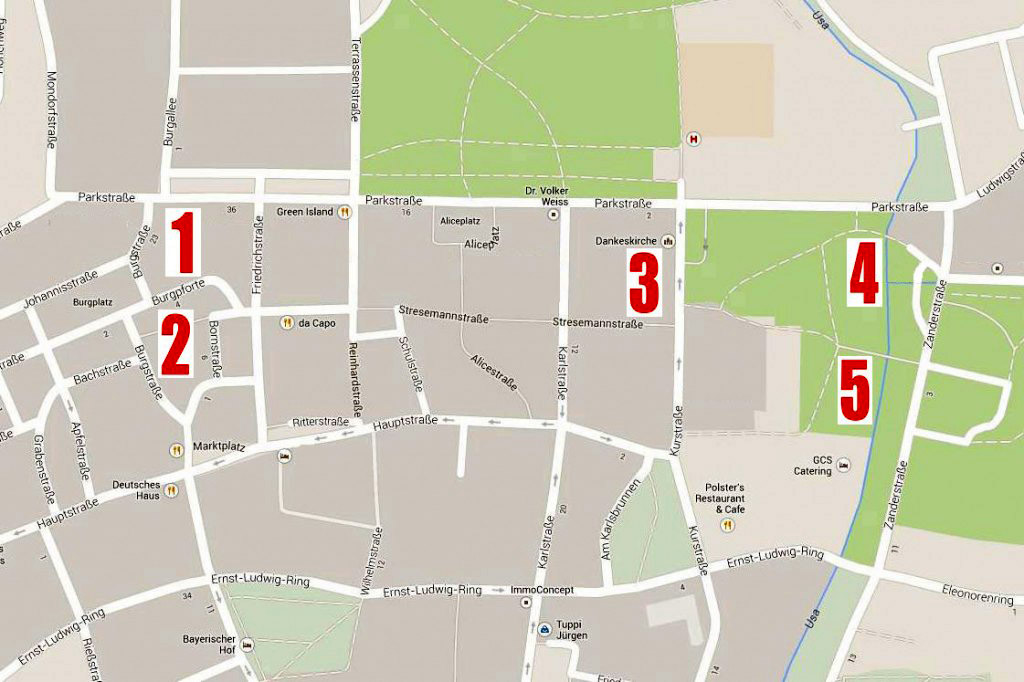 On this map of Bad Nauheim, the locations have been marked where most of the shooting took place: 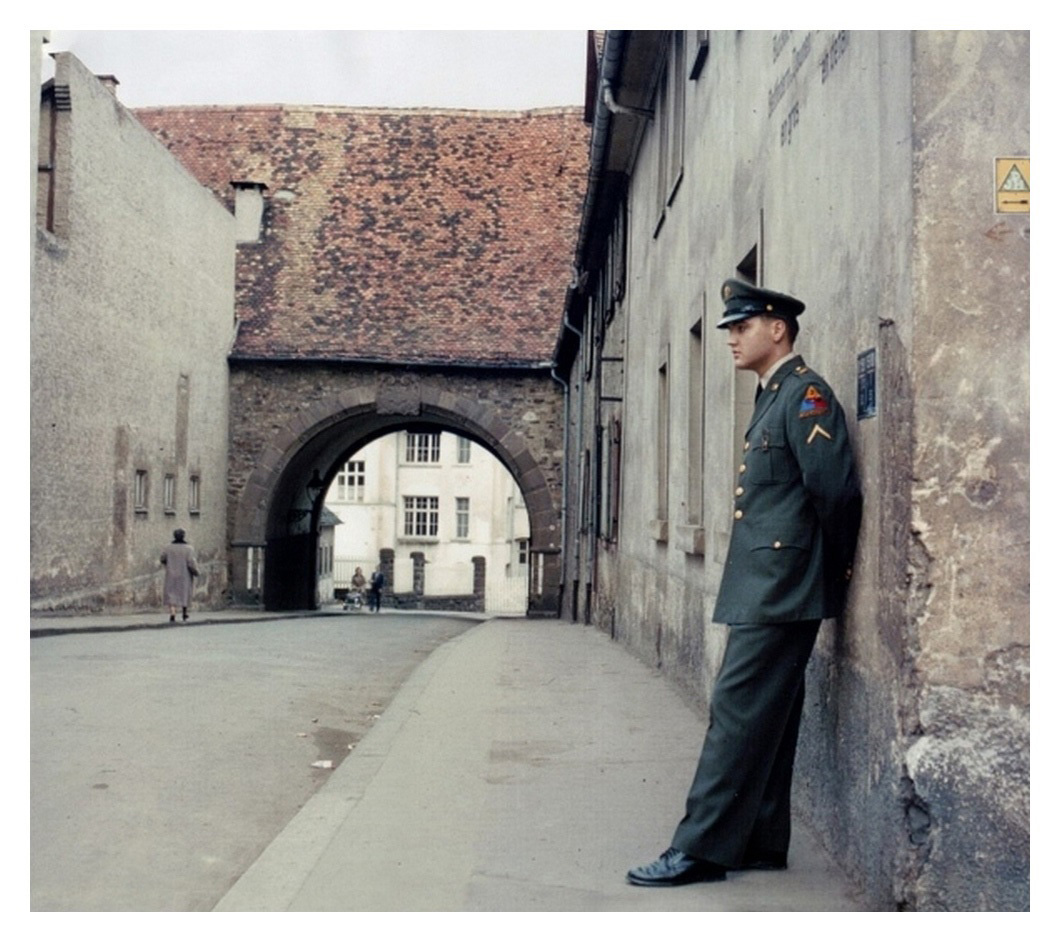 Let’s start our tour of Bad Nauheim with it’s most famous Elvis-location: the Burgpforte.

Here we have Elvis posing in front of the arch, with his back against the wall, and looking straight ahead. In the background we see a woman walking towards the arch. A couple is approaching her. 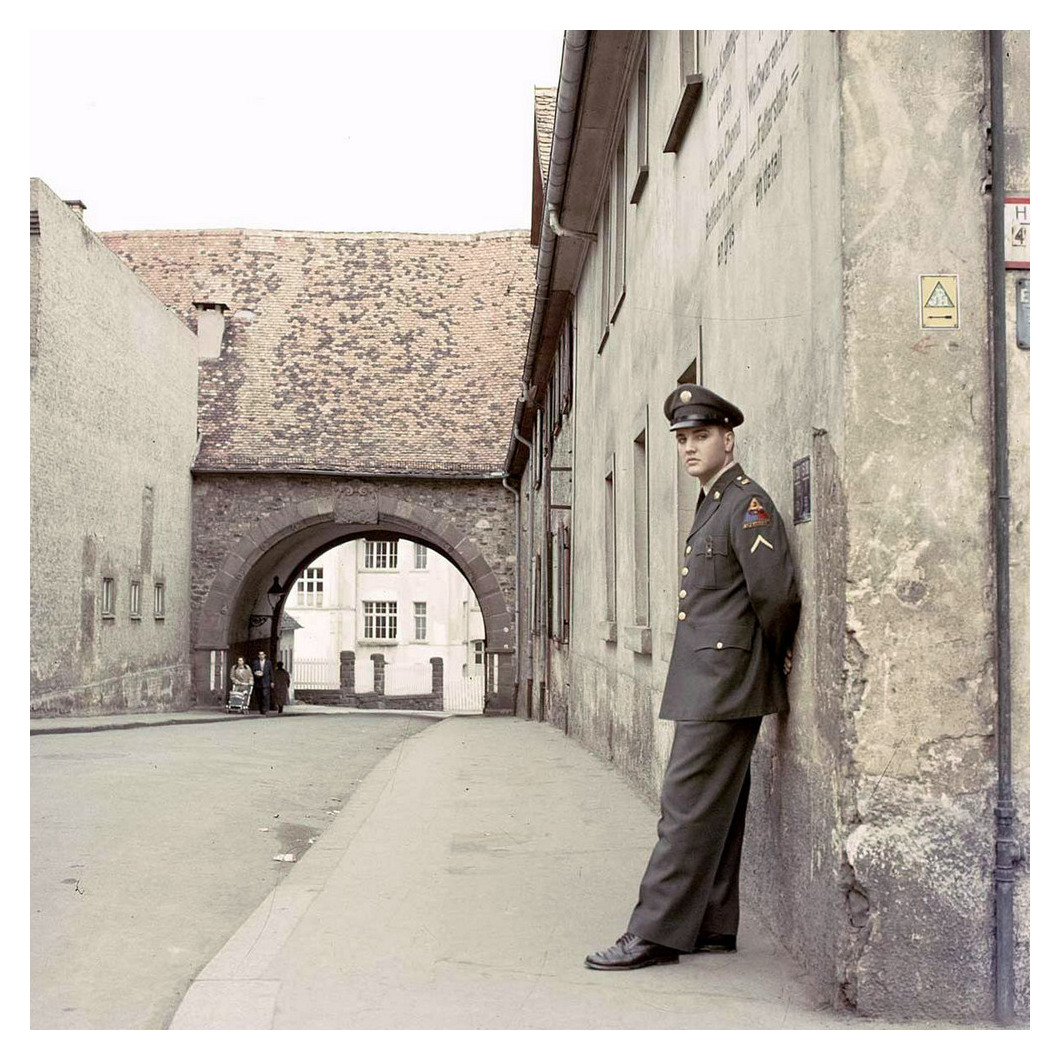 A few seconds later. The woman has passed the couple, and Elvis is now looking into the camera. 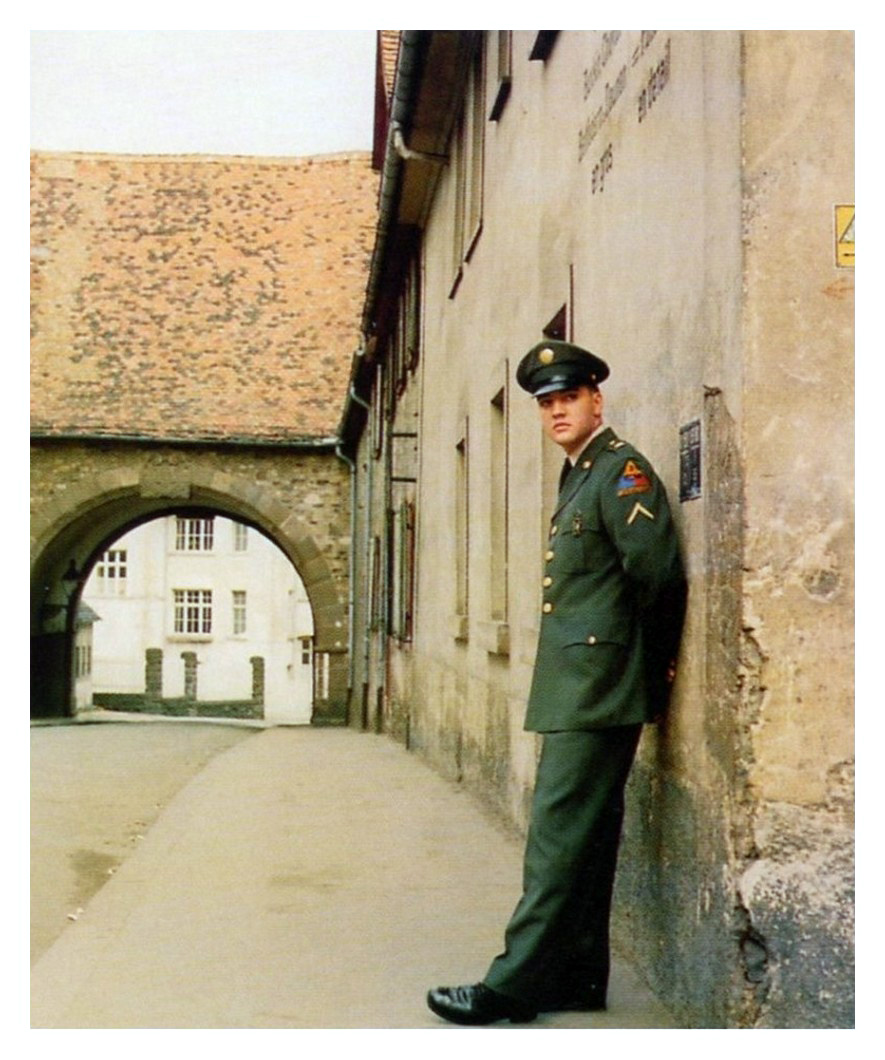 Once again, a few moments later. Elvis in about the same postion, but this time there are no people in the background.


Below we see the Soldier Boy bootleg EP that was released by the Vik label in 1998. The photo on the cover of this EP is a little bit less cropped to the left. 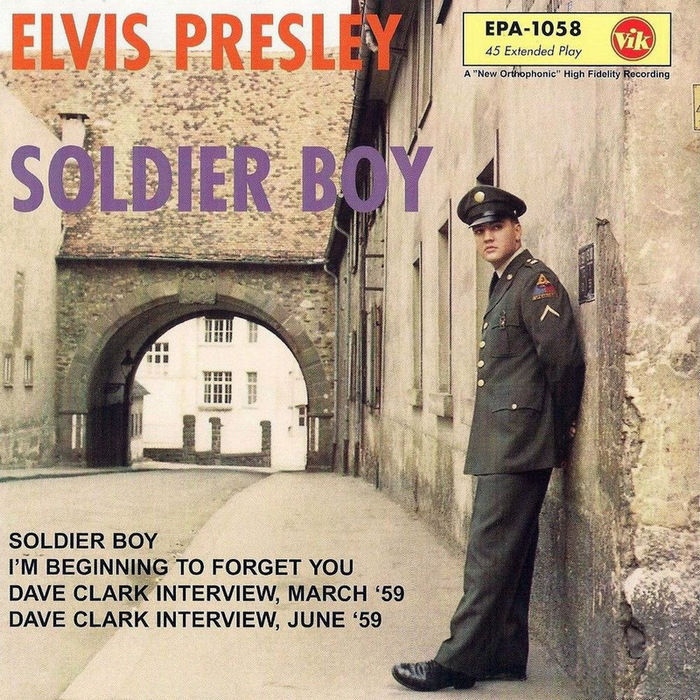 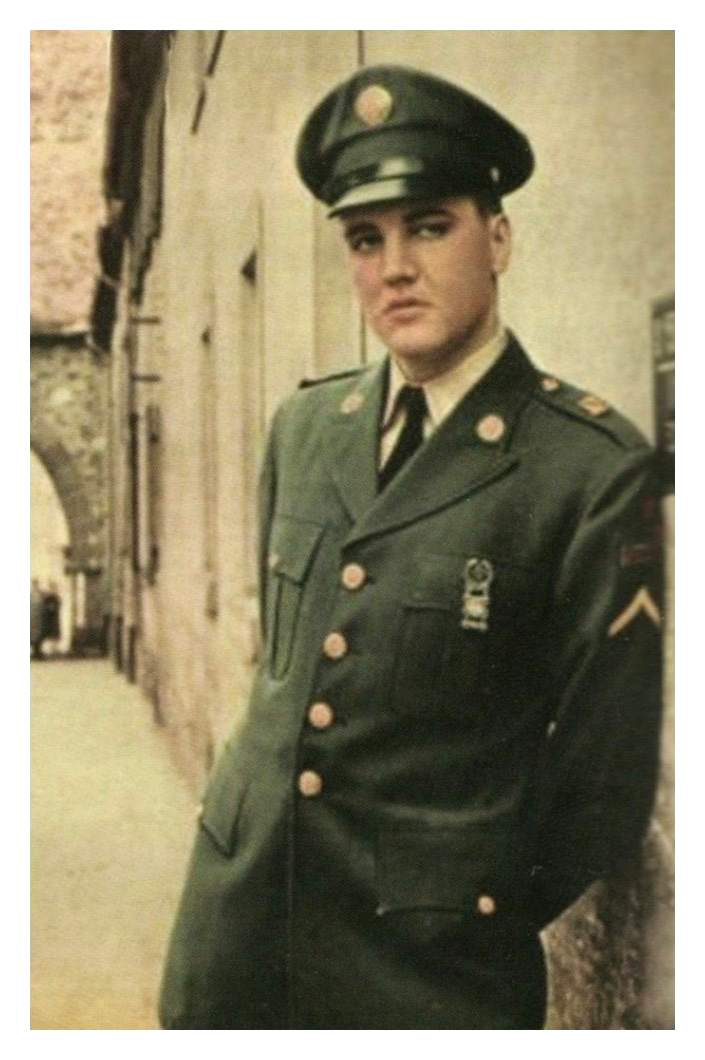 A slightly different pose, with his shoulder now leaning against the wall. Underneath the arch we can see some (different) people who are about to cross the street. 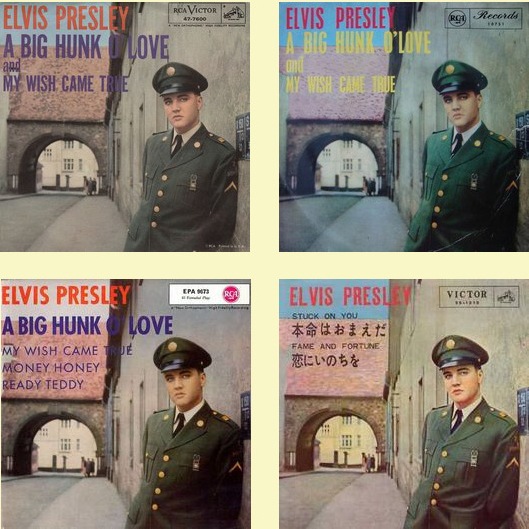 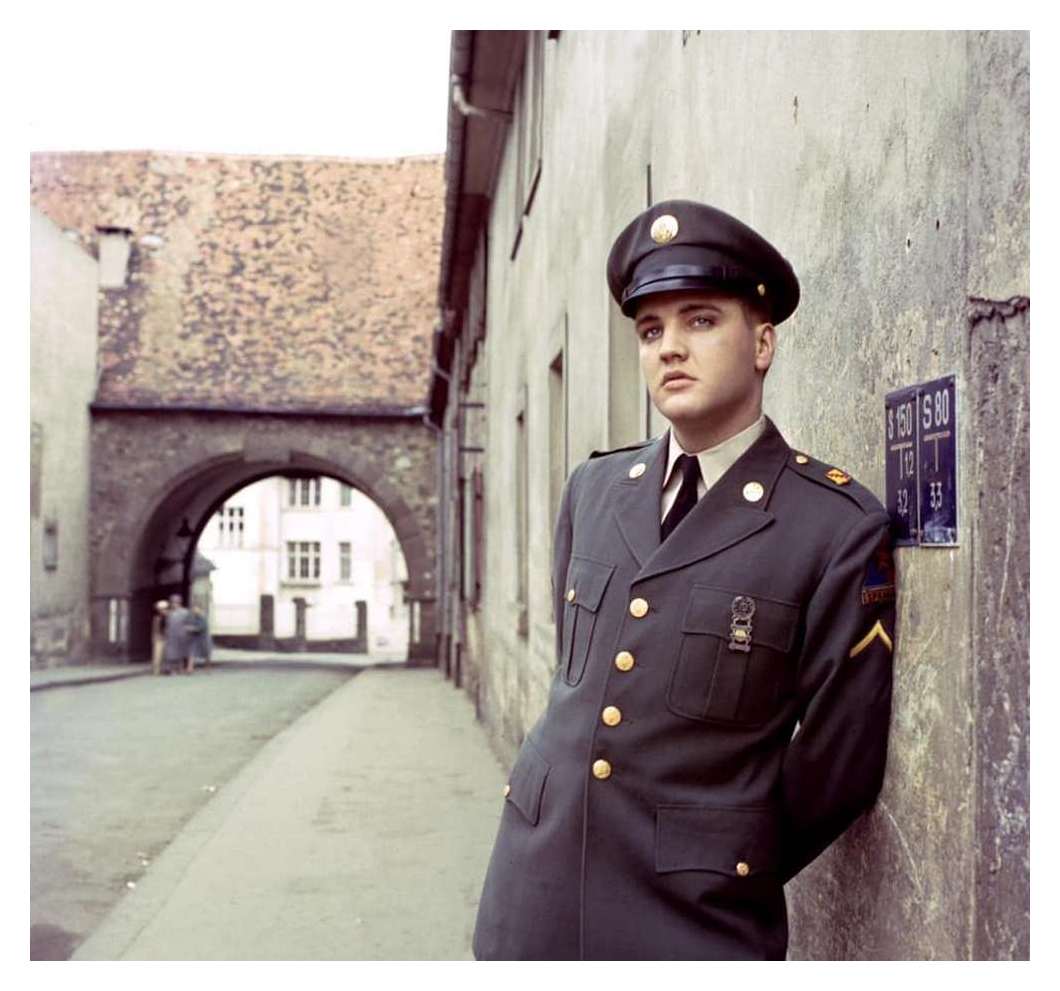 Only moments later. The three people have nearly crossed the street, and Elvis is now looking up. 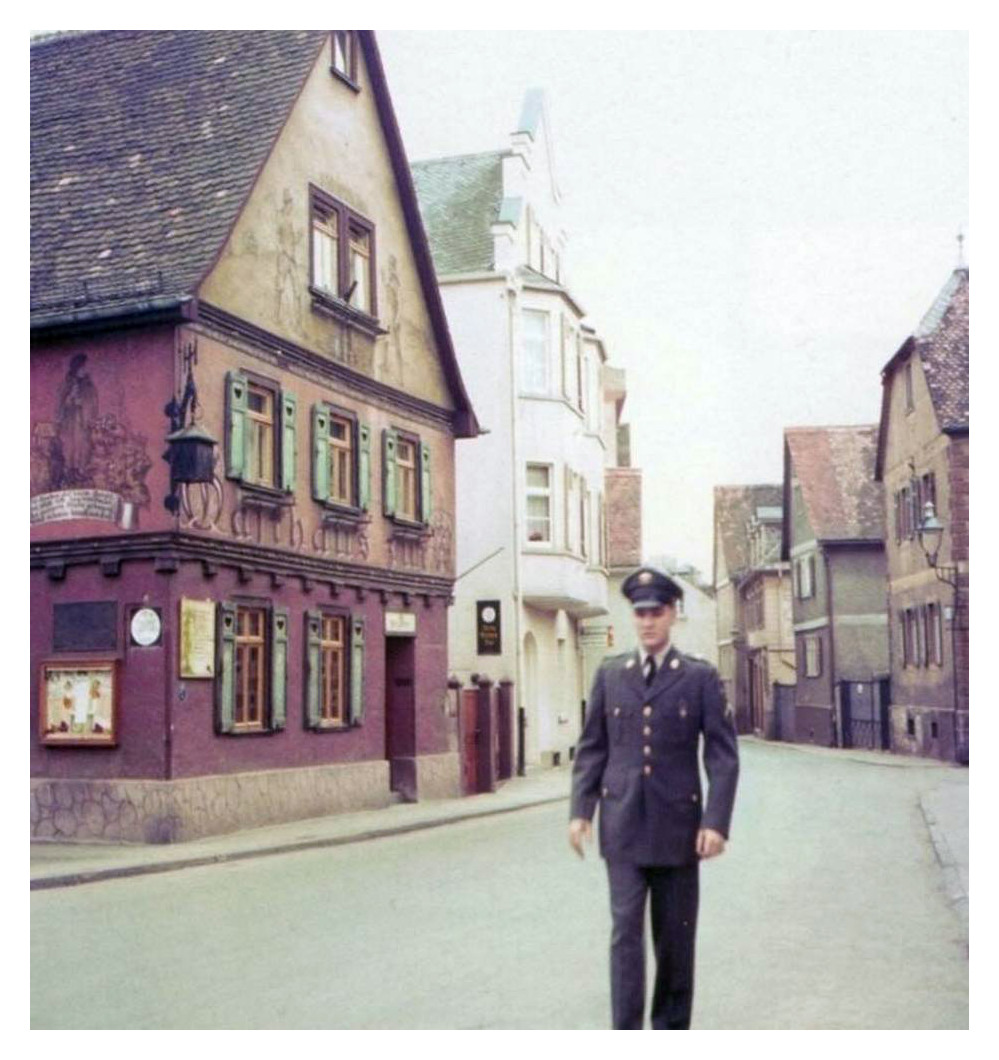 Just around the corner of the Burgpforte, in the Burgstrasse, is the restaurant Gasthaus Zur Krone that Elvis is passing here while walking in the direction of the Borgforte, so this pic was probably taken a bit earlier.

The restaurant is still in exactly the same style as it was in 1959, as we can see in the pic below, which was taken in september 2012. 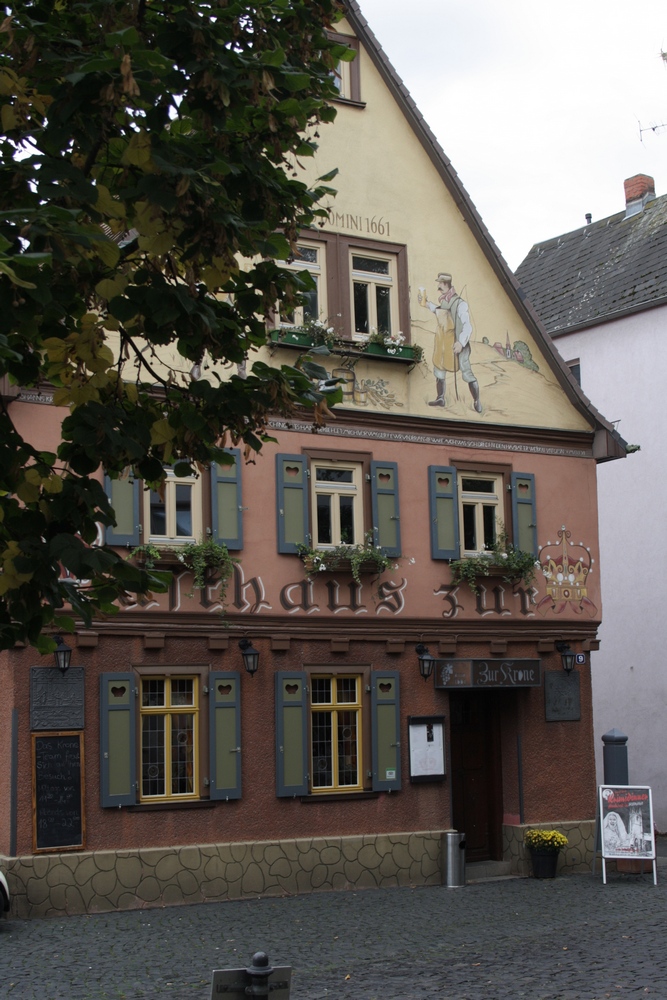 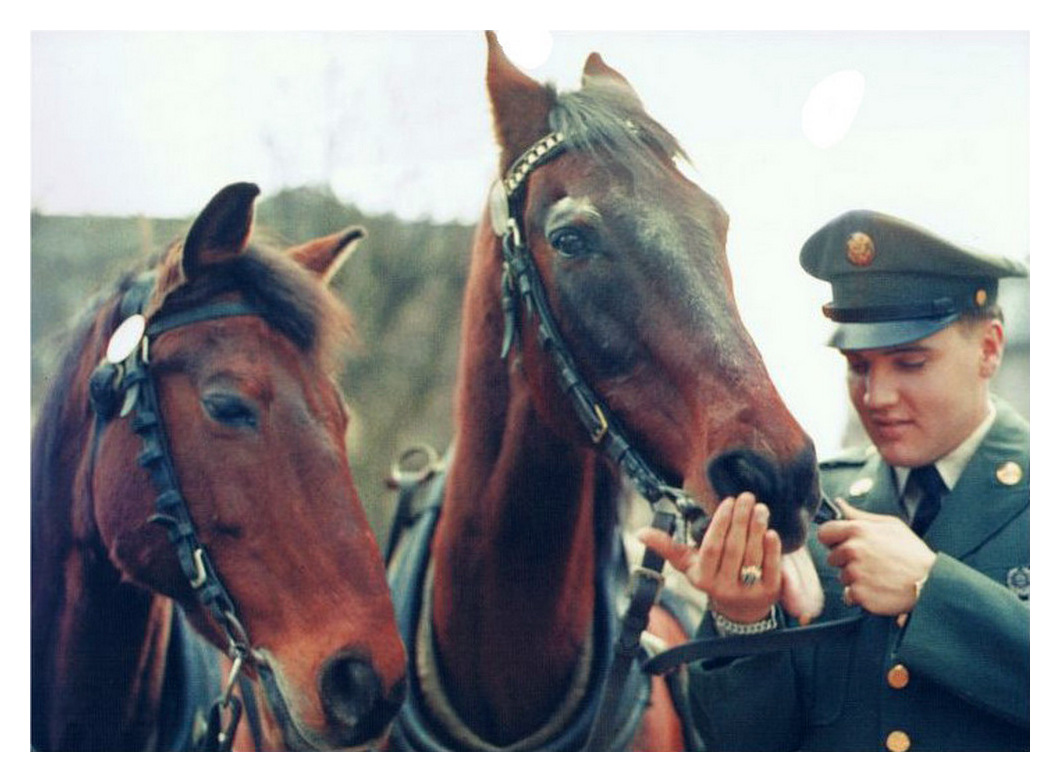 The photos on location number 3, were taken in front of Bad Nauheim’s church, the Dankeskirche. 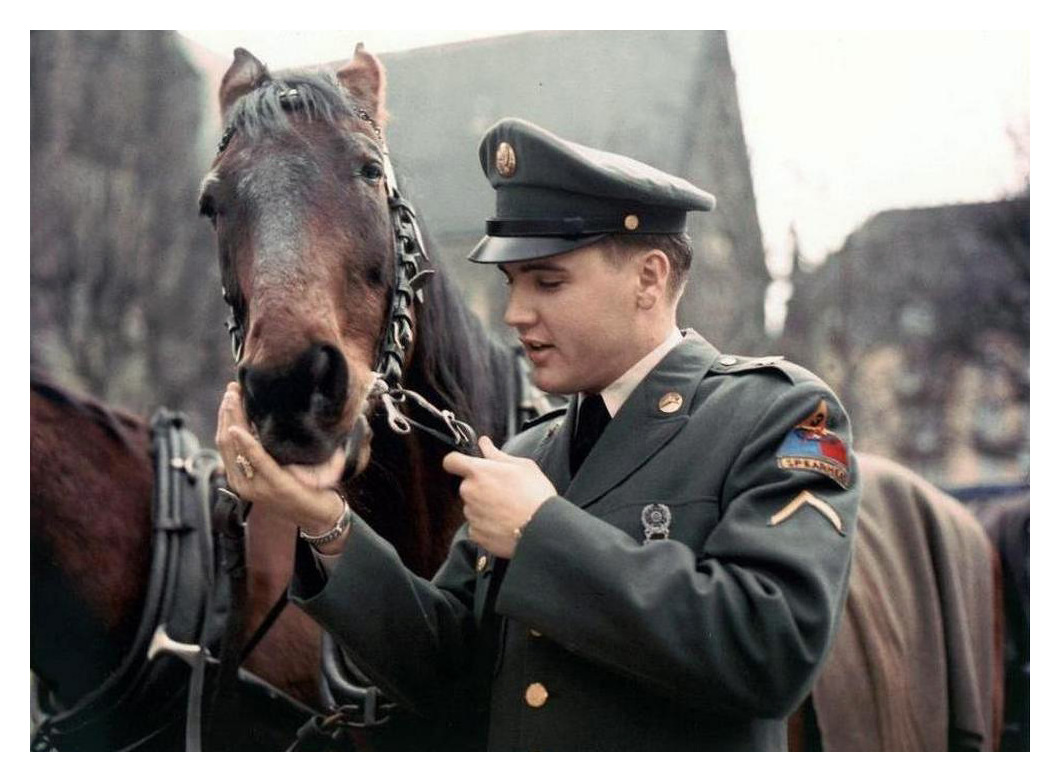 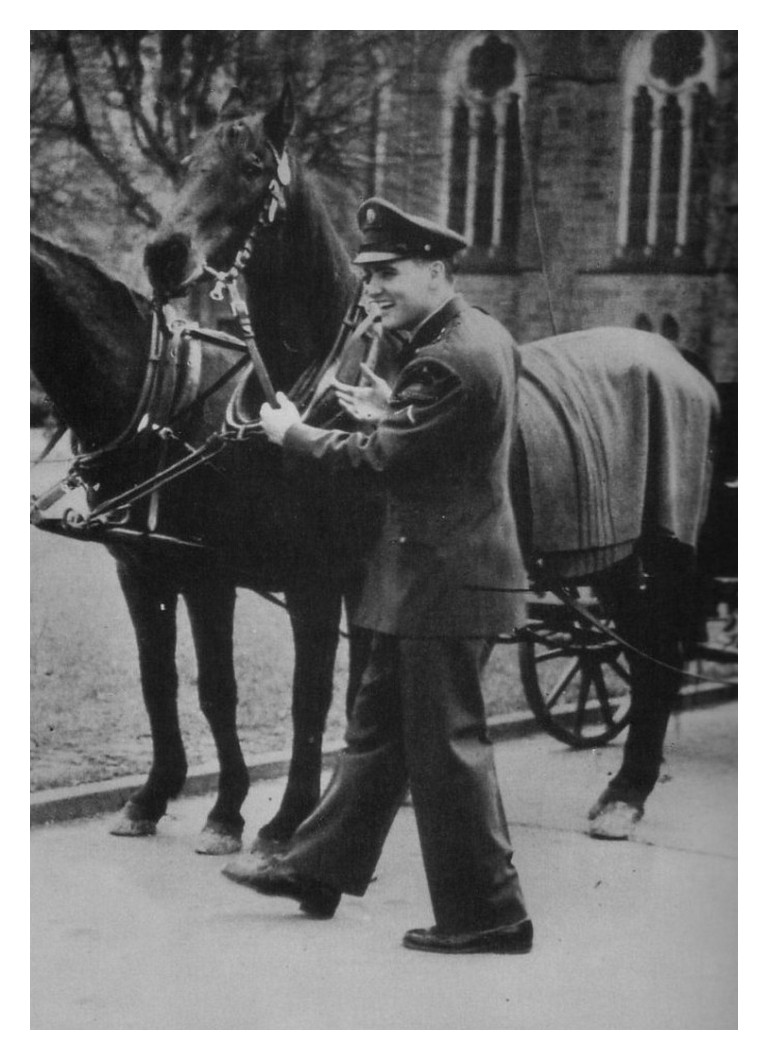 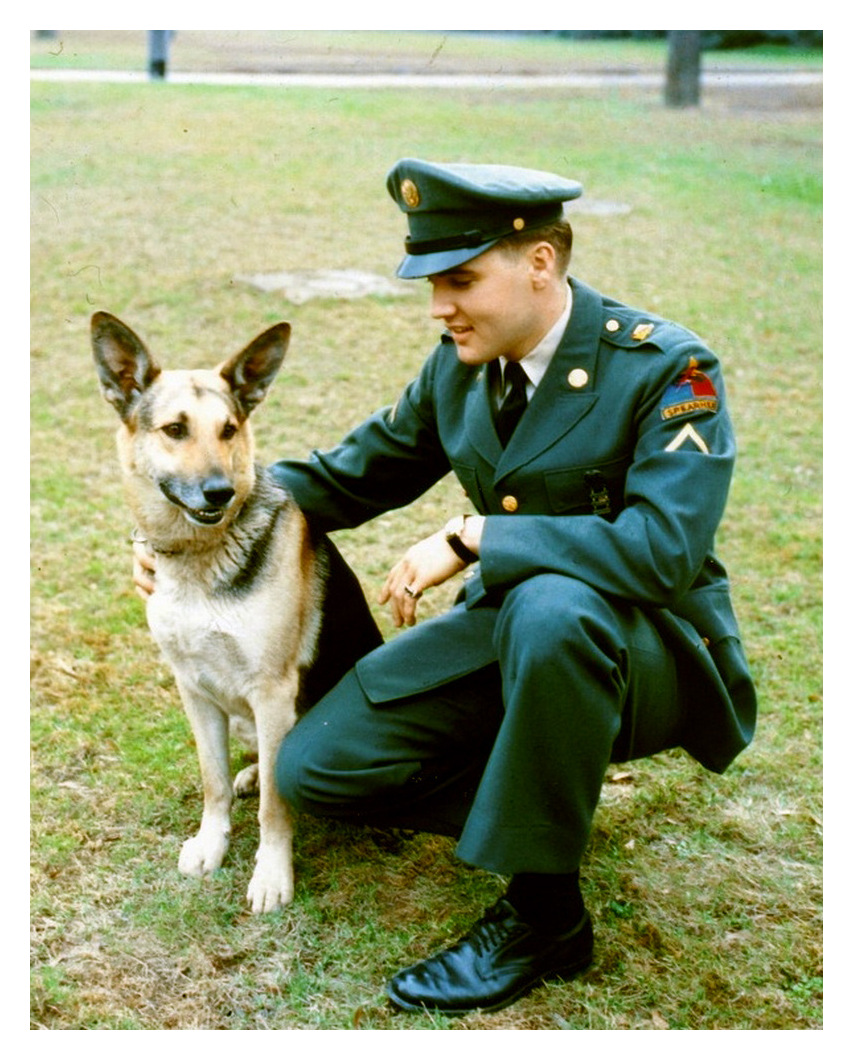 In the photo above, Elvis appears to be looking at a different photographer. Please take a look at the 1959 Christmas card (presented below), also in the pic with the horses Elvis is once again looking in a different direction and not at the photographer who took that particular photo.

In the nice photo to the right, the Lord is my German Shepherd.

Vernon Presley is standing to the right of his son in the photo below to the right. In nearly all of the March 1959 pictures, Bad Nauheim seems to be quite deserted. However, in this pic we can see a small crowd of onlookers. Bad Nauheim was a quiet and tiny town when Elvis lived there, but the lack of people in most of the photos, as well as the well-dressed locals that can be seen in this image, fuel the thought that the day of the shoot might have been a sunday morning. 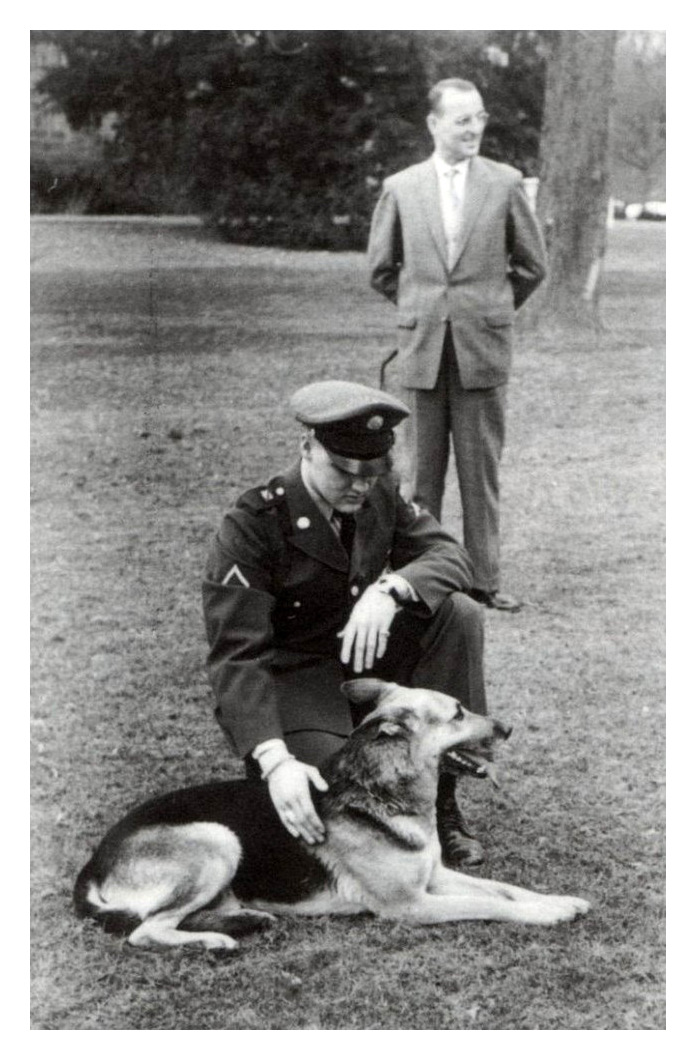 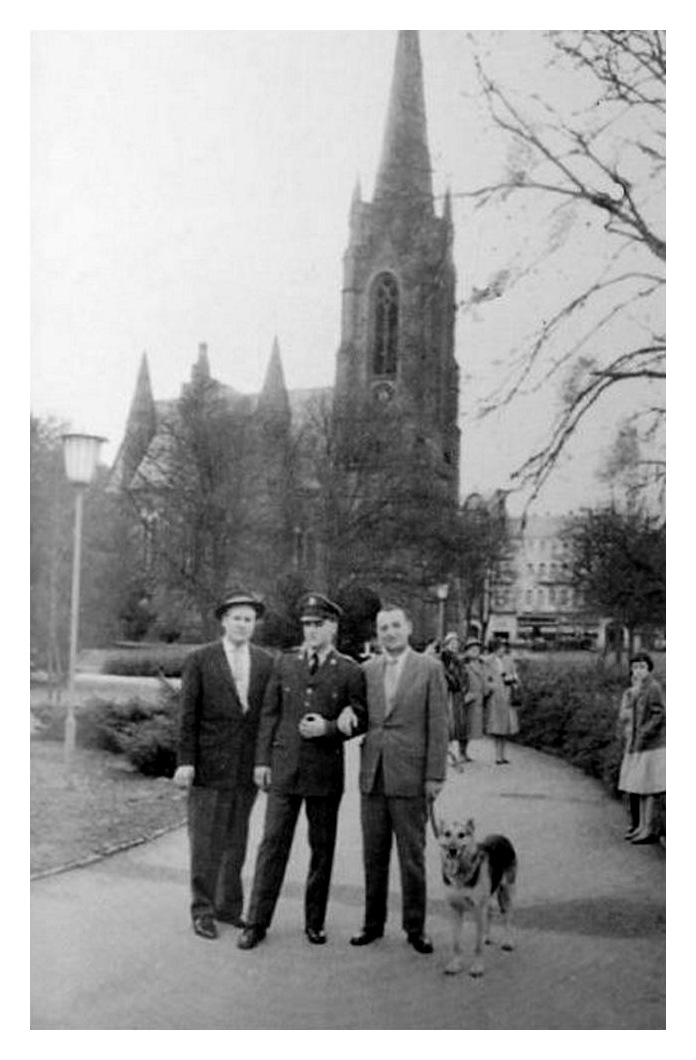 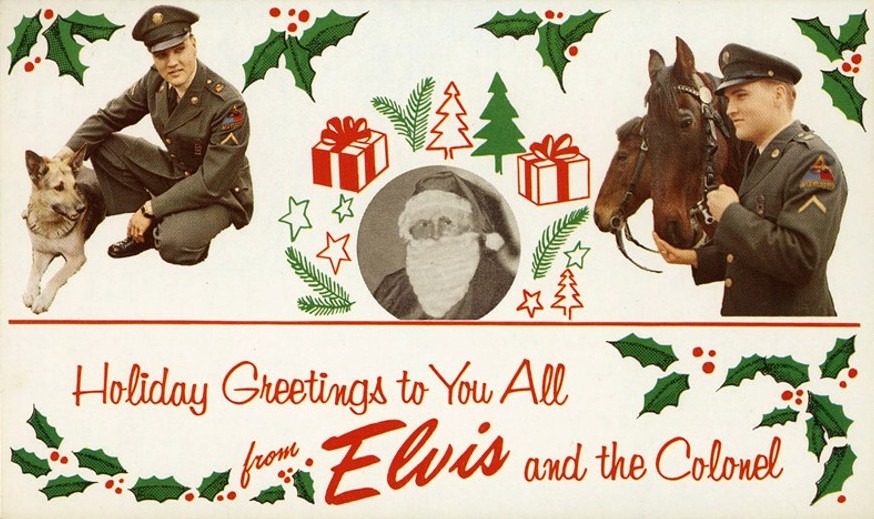 To the right we see the Christmas card that was sent out in 1959 on behalf of Elvis and Parker.

It’s interesting to notice that the two pics used for this card both show Elvis in a slightly different pose when compared to the photos above.

“Holiday Greetings To You All
From Elvis And The Colonel”

In 2006, 47 years later, EPE revived the ’59 Christmas spirit by sending out that year’s wishes in the style of the 1959 card. The back- and front cover of the CD Holly Leaves And Christmas Trees are shown here.

“Holiday Greetings To You
From Elvis Presley Enterprises, Inc.” 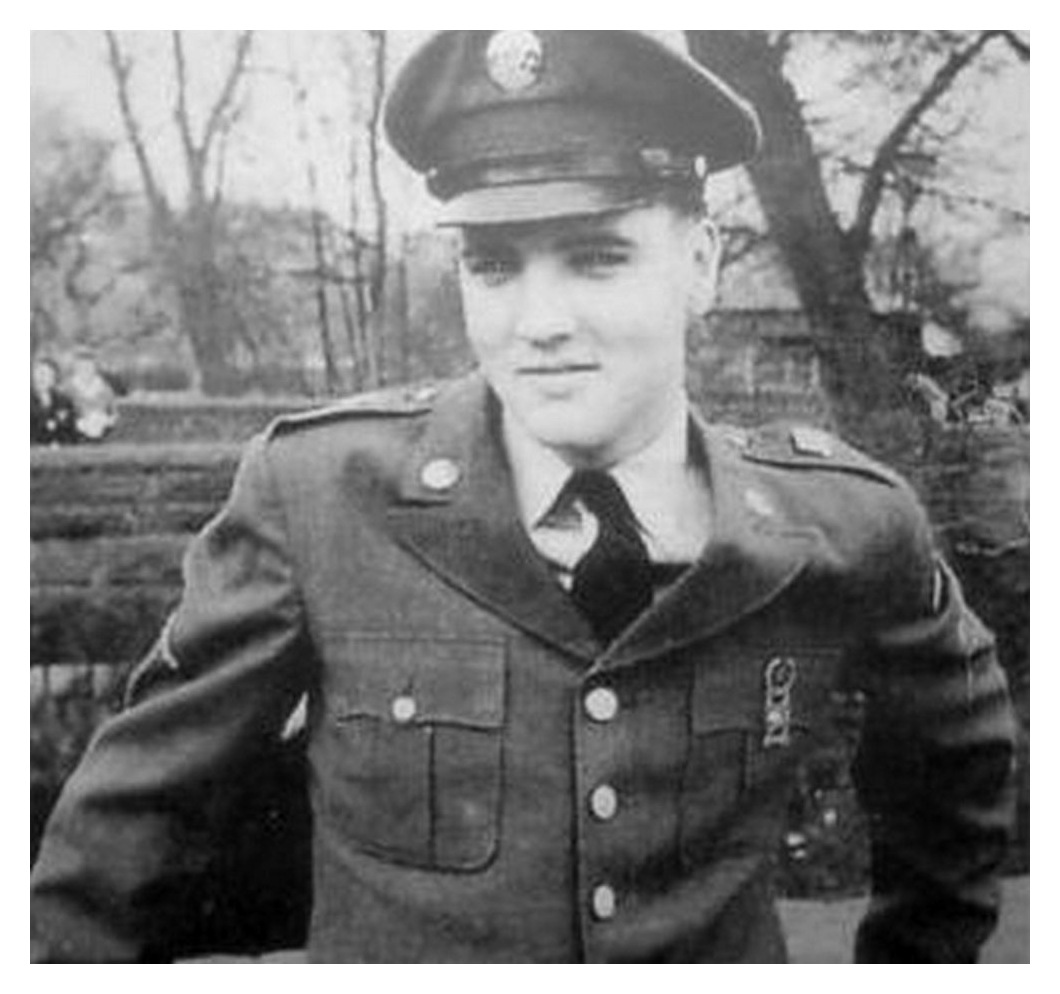 Elvis on the first bridge, of two bridges he posed on that day.

In the background of these photos, we once again see 5 or 6 casual passers-by that have noticed Elvis and the photographer(s). 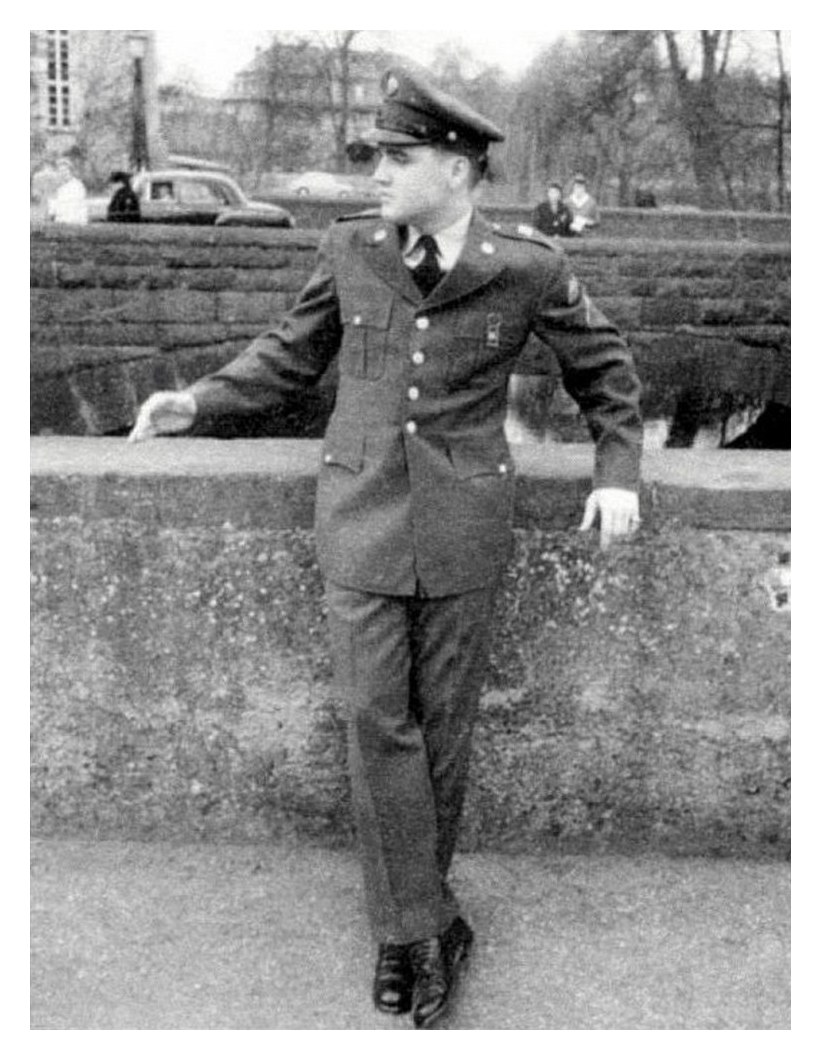 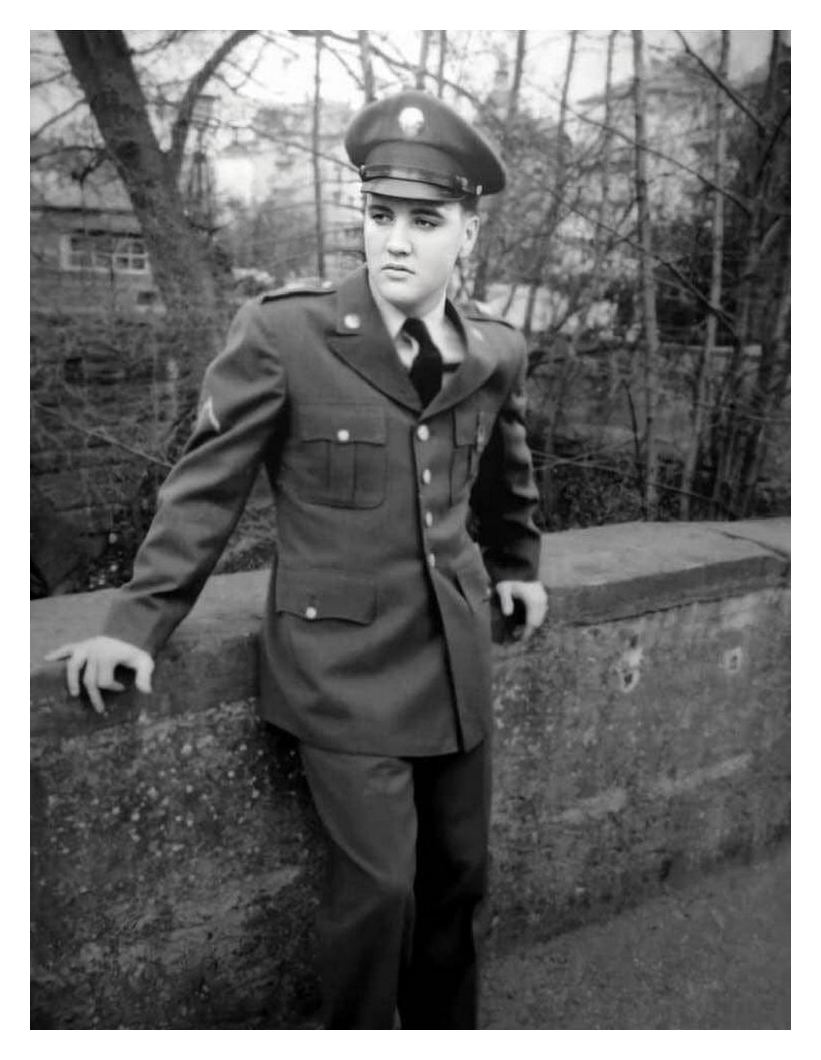 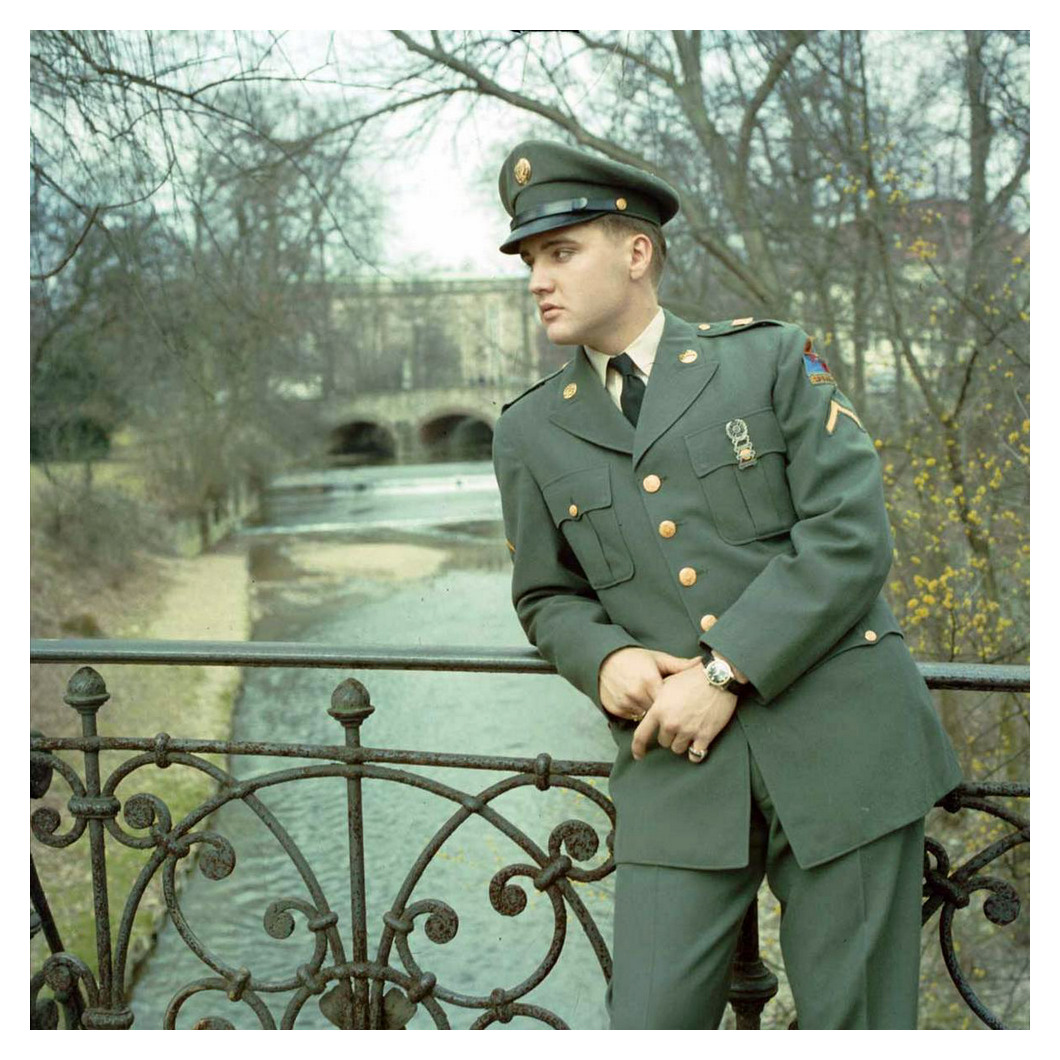 Here we have Elvis posing on the second bridge. In the backgorund of this photo, we see the first bridge.

The excellent Greetings From Germany bootleg CD (another release on the Vik label) caused quite an uproar when it was released in 1998. 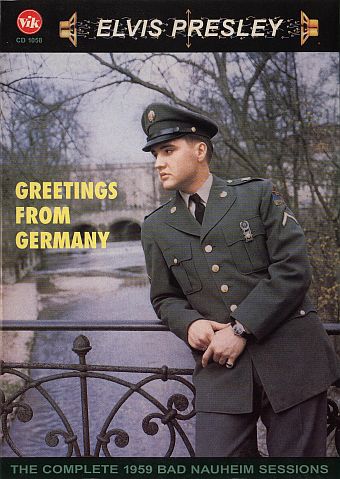 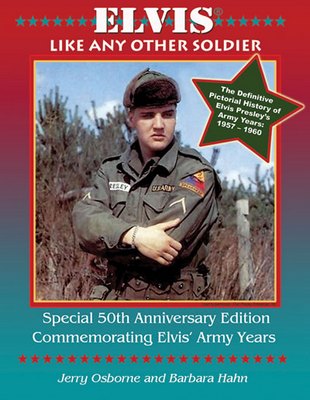 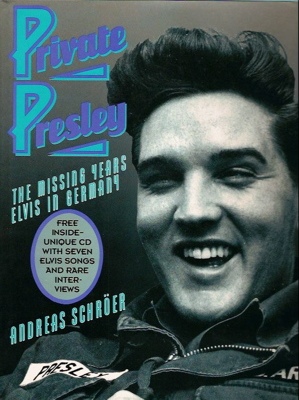 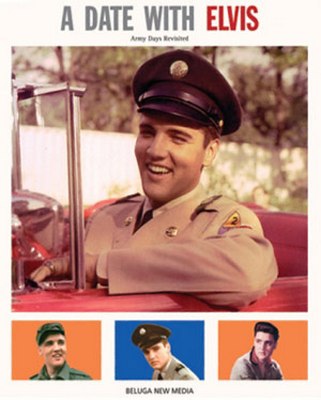 Some of the pics in this article were scanned from these wonderful books.