“There’s this song, Jungle Rock, by Hank Mizell, what a mysterious person. What a ghost.
And you can put that thing on and see him, standing in some little studio, way back when, and just singing that song.
No reason, nothing gonna come of it. Didn’t sell. That wasn’t no Number 1 record, and he wasn’t playing big arenas either.
But what a mythic moment. What a mystery”. 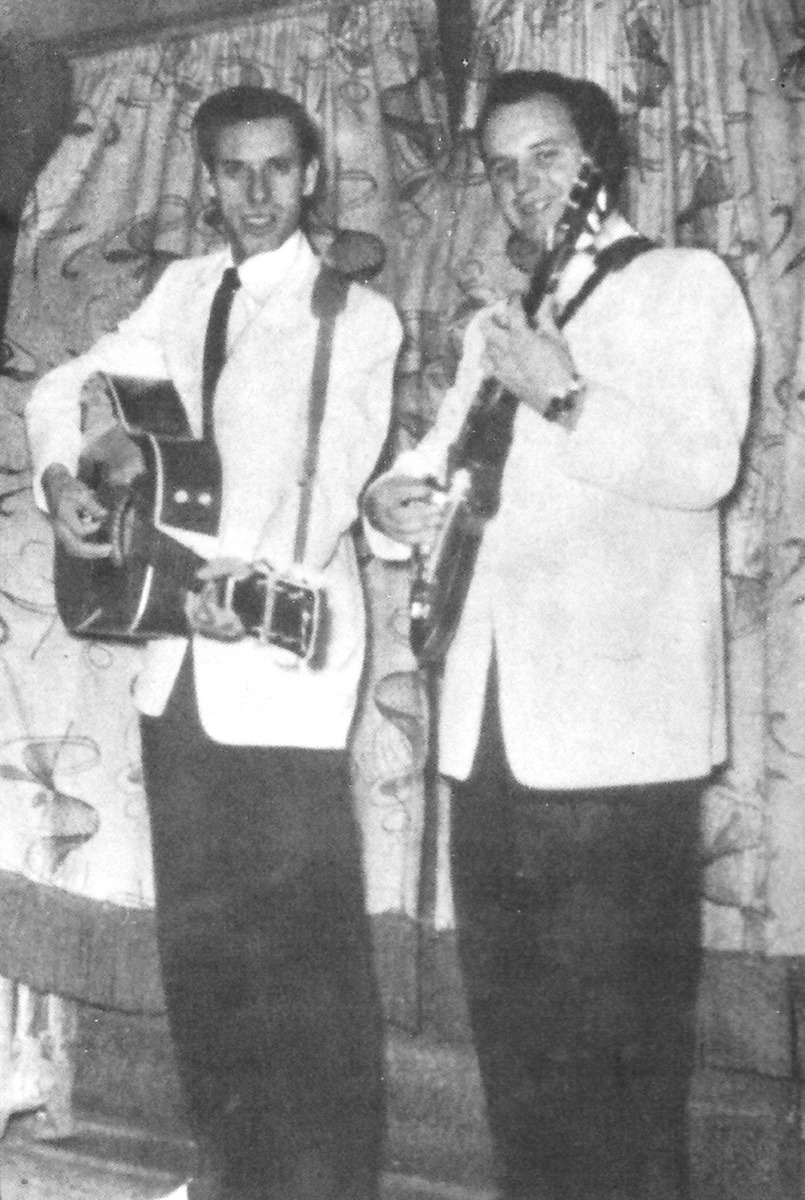 In a new series on Echoes, we will put the spotlight on obscure songs from the 50’s that, for a variety of reasons, have a story to tell. Our first entry is Jungle Rock, recorded by Hank Mizell.

Jungle Rock was recorded in 1958, but two attempts within a year to bring the song to the attention of the public, failed miserably. After two more flopped singles, Mizell left the music business in 1961 and became a preacher. Then, in 1976, a miracle happened: Jungle Rock became a smash hit in Europe, first in the UK, and then also in other European countries. According to an interview with Mizell in 1976, he and his family had hit rock bottom when Jungle Rock became a success: “We were so poor, my kids’ shoes were rotting out. I hope nothing will be the same again for me and my family”. In the wake of the European success, a Nashville producer attempted to bring Jungle Rock to the USA, but the song bombed dramatically for a 3rd time in Mizell’s own country.

Jungle Rock was Mizell’s debut single, but when the song was first released in 1958, he was already 35 years old. By the time Jungle Rock stormed the charts, a totally unprepared Mizell was 52 and he had been away from the music scene for 15 years. 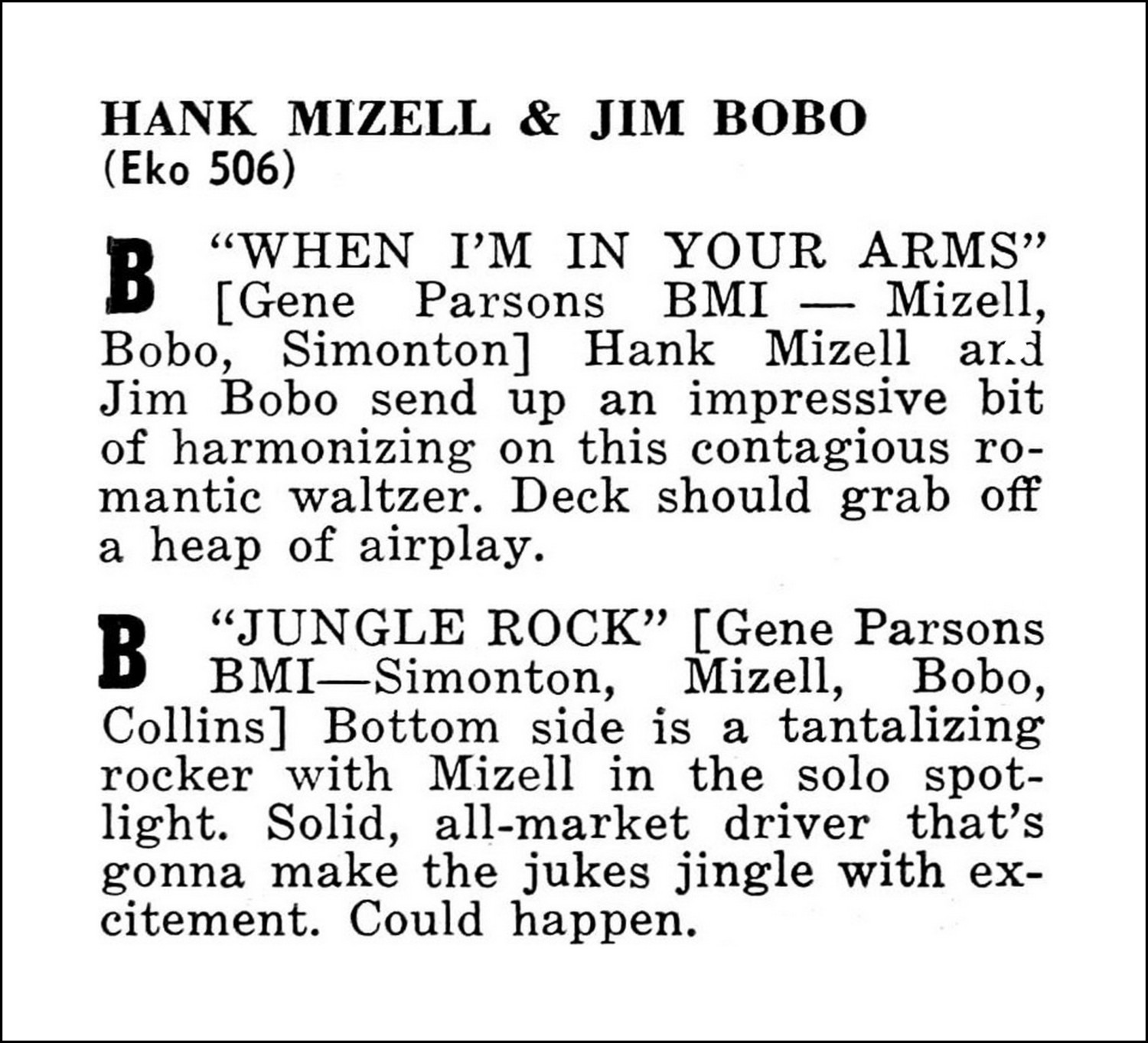 The first time Jungle Rock appeared on the scene, was in late 1958, when the song was released on the shortlived EKO label that was based in Hank Mizell’s hometown at that time, Chicago. EKO was a small company that did not have its own pressing plant, and the EKO singles were actually pressed by RCA Victor.

The flipside of Jungle Rock, was a close harmony duet with Jim Bobo, who was Mizell’s musical partner during the late 50’s. 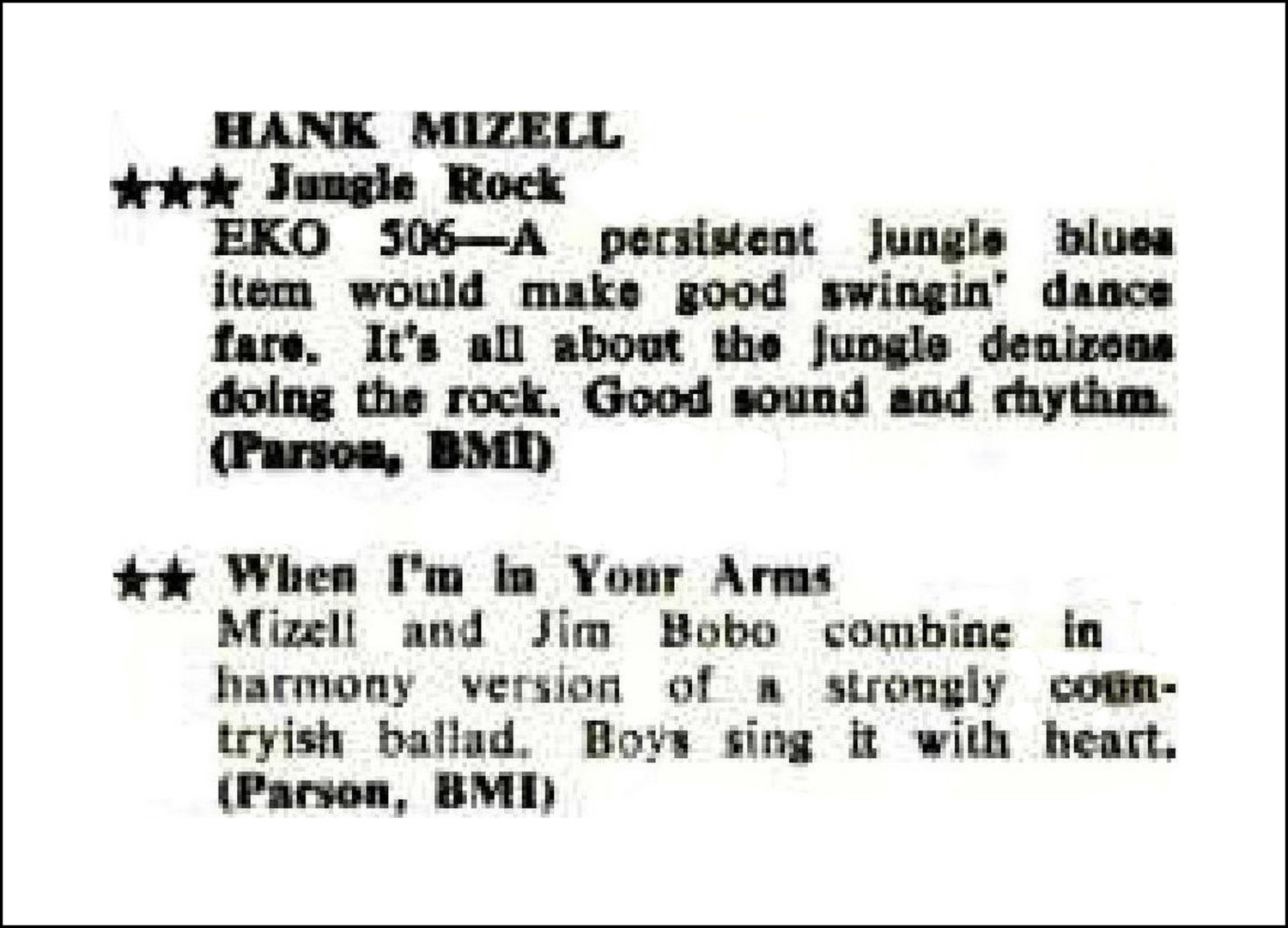 Billboard’s rating system was only half as extensive as The Cash Box’s rating sytem, and new releases would only be given one, two or three stars. Jungle Rock received the maximum amount of stars, while the duet with Jim Bobo received one star less.

EKO No. 506 was an extremely poor seller, and only a rumoured 120 copies of the single were sold. However, the single exists in 3 variations and all 3 are now collectors items. We’ll take a look at these rarities below. 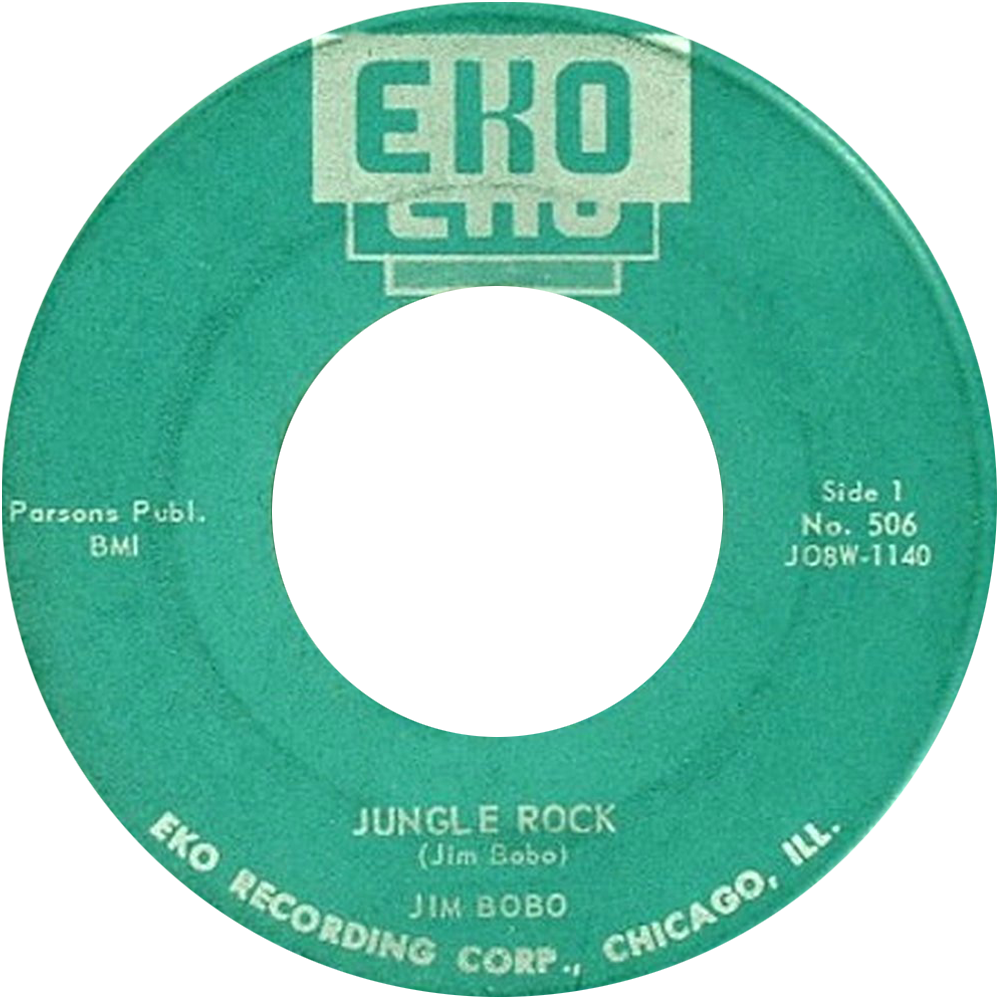 To the right we have the first pressing of Jungle Rock. But, as we can see, credit for the song has been given to Jim Bobo.

Side A of the single features Mizell on acoustic guitar and vocals, and Bobo on lead guitar. As mentioned, side B is a duet between Mizell and Bobo. Mizell should have been credited for being the singer of the A side, while Mizell and Bobo were both to be credited for the B side. But EKO mixed things up, and Bobo was erroneously credited as the singer of Jungle Rock. Bobo was also given sole writing credits even though Mizell was one of its four co-writers. 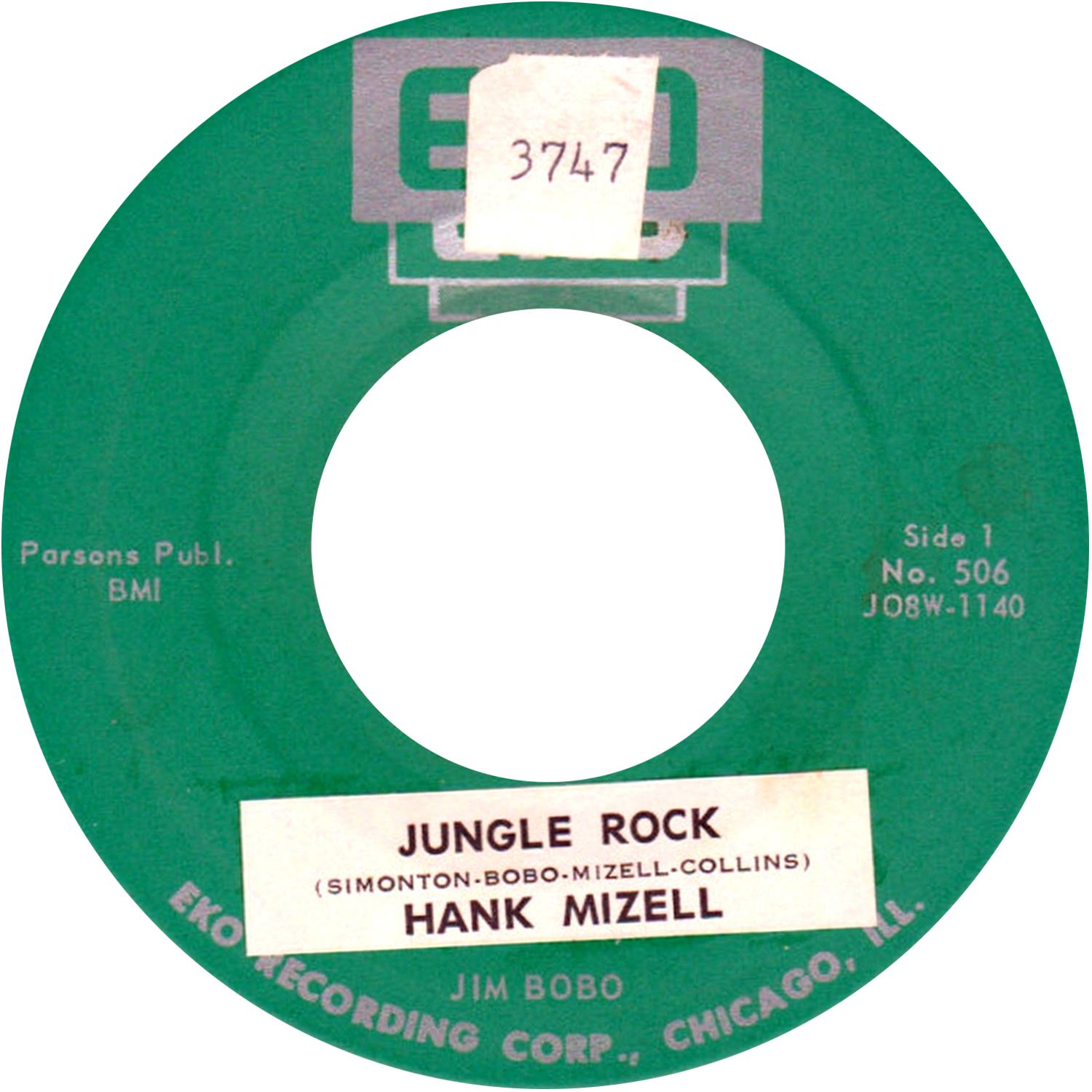 Here we have the second variation of Jungle Rock. This variation is actually identical to the first pressing, with the exception of a sticker that was placed across the credits in order to correct the earlier mistake.

The sticker is made out of very thin paper, and it could not be removed without permanently damaging the label. However, some buyers tried their luck at removing this nasty looking sticker, and this is why about half of the copies of the second variation that still exist today, have a half removed sticker, giving the label an even nastier look. 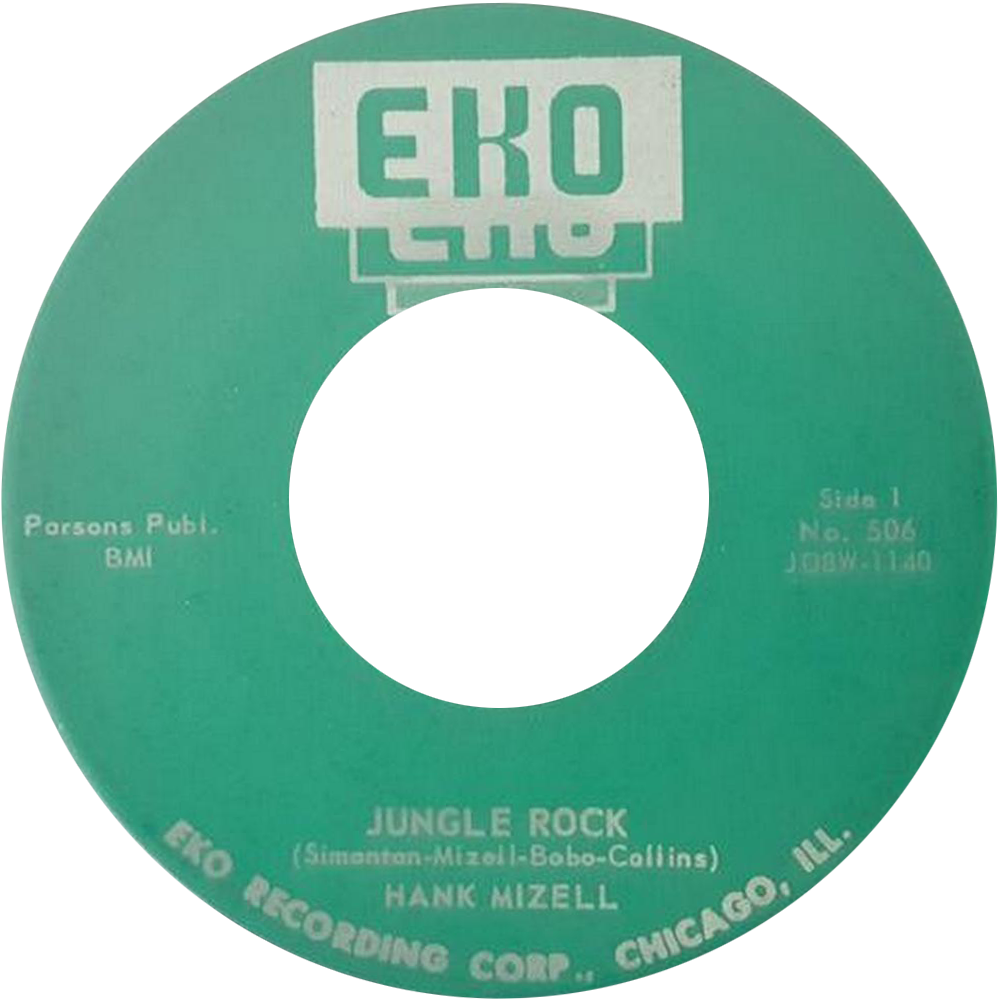 The third variation of the single, which is actually the second pressing, is the correct variation. Jungle Rock is now credited to Hank Mizell, and he also receives co-writing credits for the song.

But in the end it just didn’t matter. Mizell’s debut single bombed heavily, and, perhaps as a bad sign of what was to follow in years to come, everything that could go wrong during the launch of Hank Mizell’s recording career, did go wrong. This bad omen was further establishd by the fact that shortly after the release of Jungle Rock, EKO, not surprisingly, went out of business (in 1959). 8 months after the EKO disaster, King Records sensed a potential hit in Jungle Rock and acquired its rights from the now defunct EKO label.

King Records was based in Cincinatti, OH, and specialised in country music. By the time Mizell’s Jungle Rock was re-released on King, the company had already firmly established itself with hundreds of releases since the 1940’s. Unlike the local EKO label, King had a strong nationwide distribution for its artists. So, what could possibly go wrong for Hank Mizell?

To the right we see the promo of Jungle Rock that was sent to DJ’s across the nation. There are more King promos in existence, than there are commercial 45’s of the EKO singles. At an auction in 2017, this 45 sold for $ 200,-. 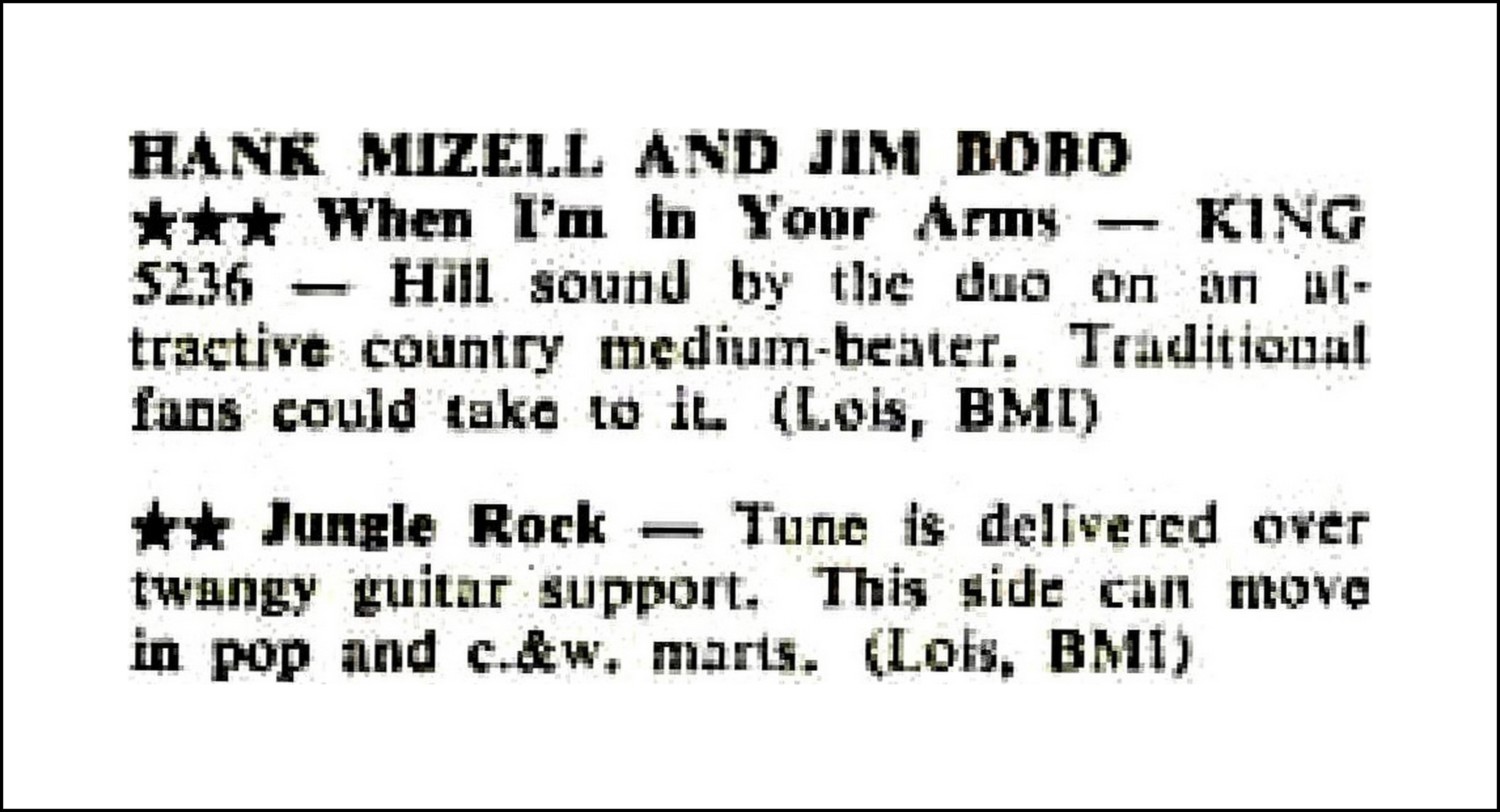 The King variation of Jungle Rock was not reviewed in Cash Box. 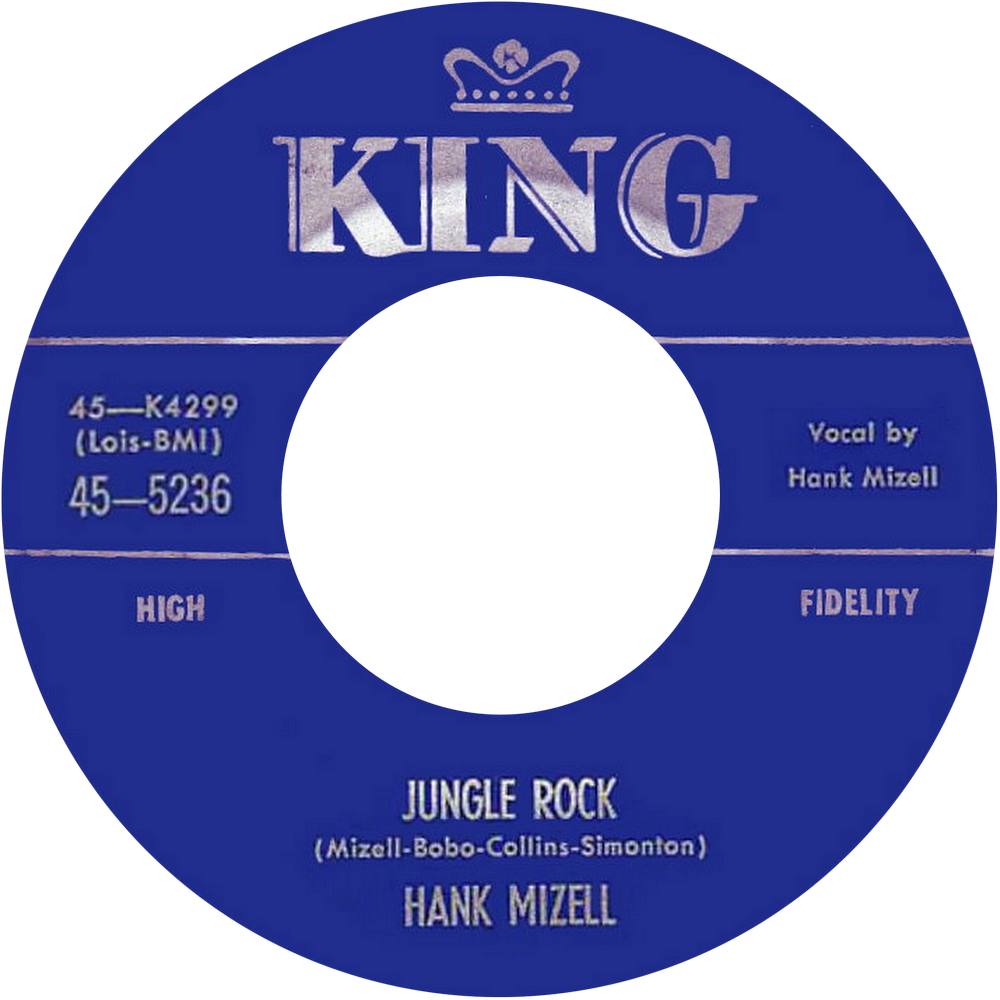 What could possibly go wrong? Well, if DJ’s ignore a new record, chances of that song finding an audience are very slim. For whatever reason, Jungle Rock received no airplay, and the song, once again, went nowhere.

After 4 failed attempts to make it as a recording artist, Mizell decided to leave the music business and become a preacher, undoubtedly prompted by the fact that he now had 4 children to feed. Mizell never cashed the only royalty check he ever received for Jungle Rock, the total amount of which was $ 0.86. 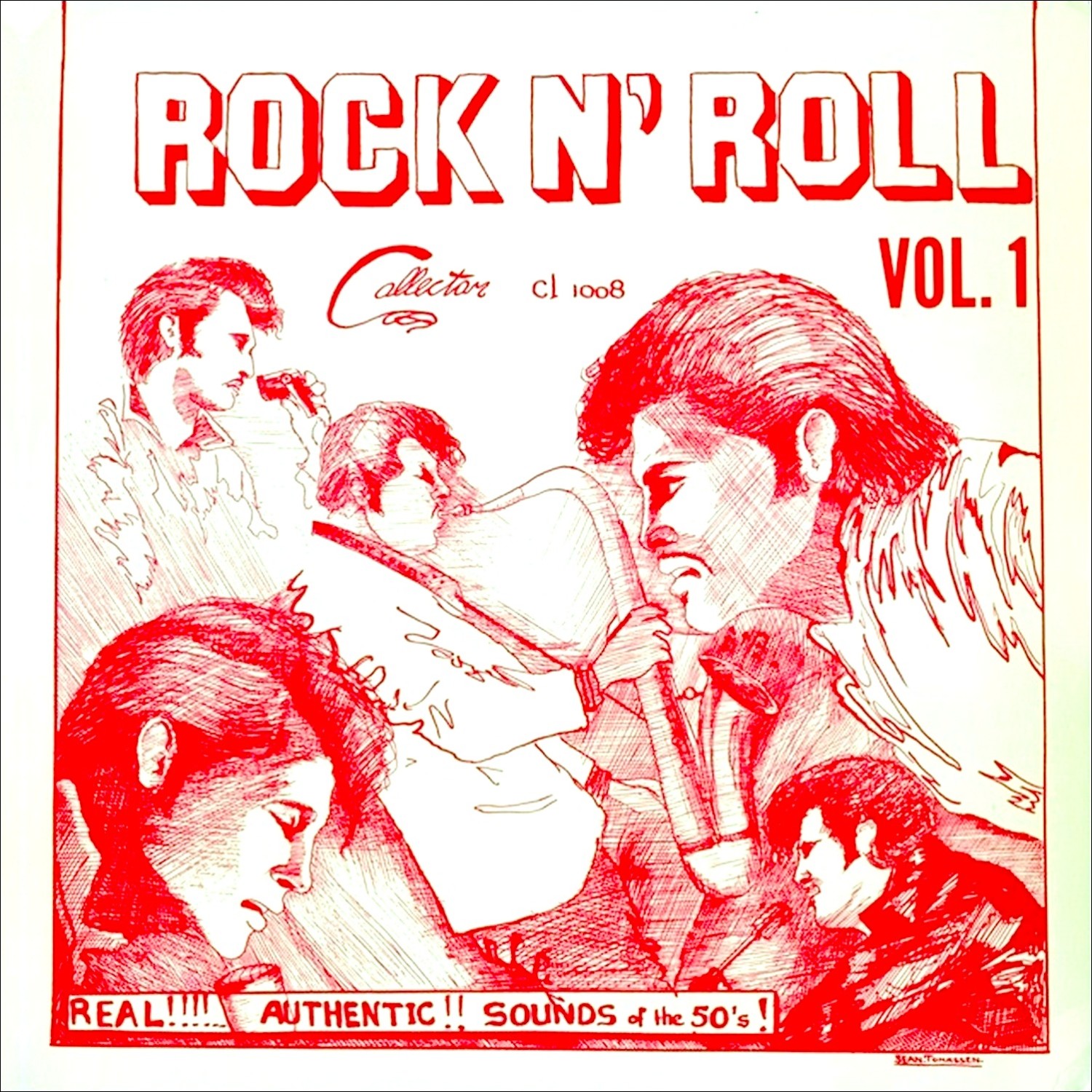 The inclusion of Jungle Rock on the bootleg (with the remarkable artwork) to the right, marked Hank Mizell’s introduction to a European audience. There was, however, one slight problem …

The manufacturer of this LP, Collector Records from Holland, had directly copied Jungle Rock from the first EKO single. Unknowing to Collector Records this single included false information as to who the singer of the song was, full credits for Jungle Rock were therefore given to Jim Bobo. As if the devil himself was playing games with Hank Mizell, his name was nowhere to be found on the LP that would eventually open the door for the preacher. So Mizell had to wait yet a few more years before finally finding success, but, by the early 70’s, there was definitely something brewing in the jungles of Europe where a rockabilly revival was on the rise. 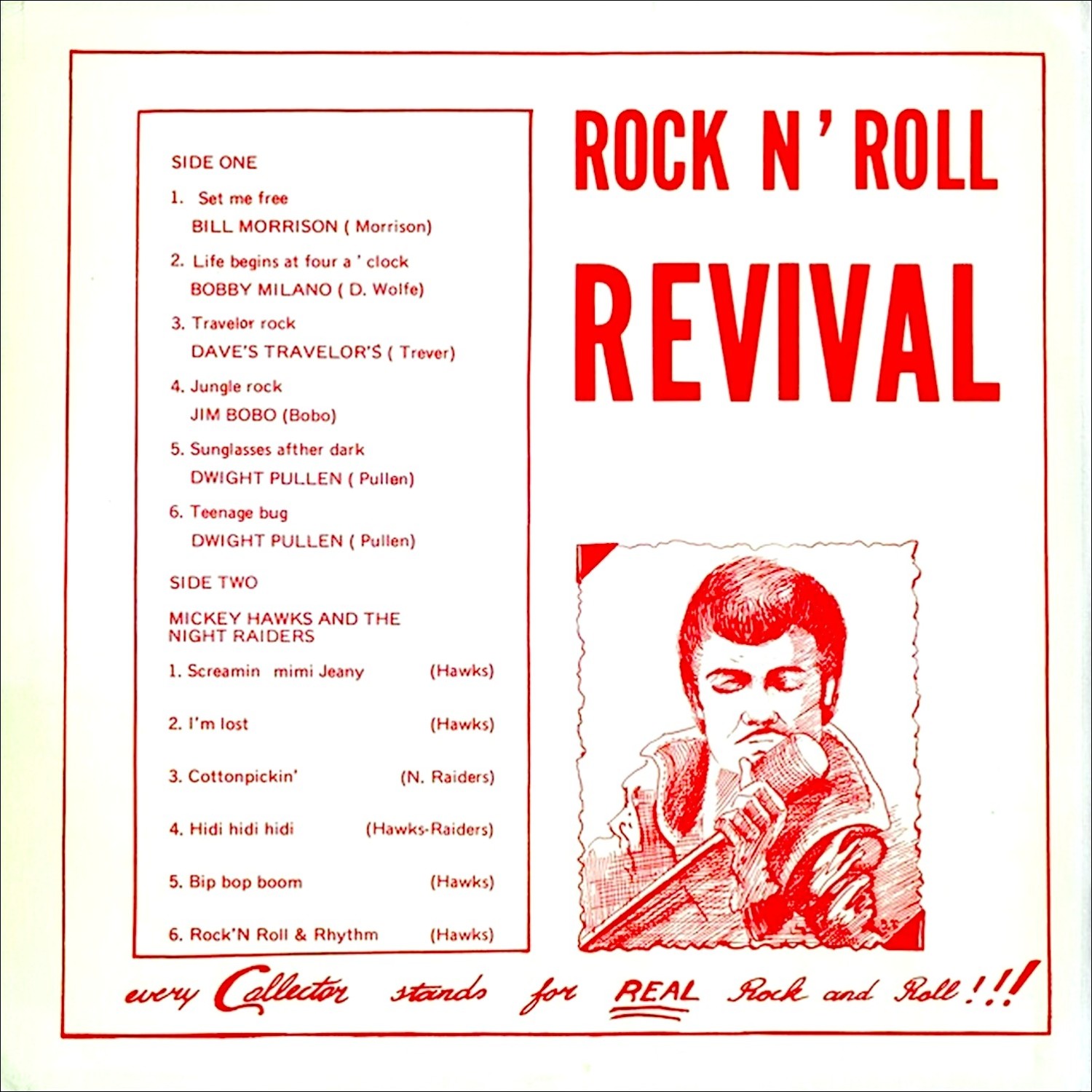 Collector Records, one of the first record companies to focus on the “Real!” – “Authentic!” – “Sounds of the 50’s!”, was formed by Cees Klop from Holland.

Within the Elvis community, Cees Klop is not only known for producing the first ever Elvis Presley bootleg LP in 1970, the iconic album with the just as iconic title Please Release Me, but also for unearthing the acetate of My Baby’s Gone in 1967.

Cees sadly died in August 2017, at the age of 73, but almost half a century after releasing the bootleg to the right, and literally hundreds and hundreds of albums (that brought the work of just as many unsung heroes of rock ‘n’ roll to the fans) later, Collector Records is still in business today and doing what it does best: unearthing obscure and forgotten rock ‘n’ roll music from the 1950’s and making it available to fans and collectors all over the world. And we have to thank Cees Klop for this. Jungle Rock started making a name for itself in Britain during the early 1970’s when DJ Roy Williams, founding father of the rock ‘n’ roll scene in London, gave the song plenty of spins in the clubs. As a result, counterfeit copies of the single started appearing in order to meet the demand from British fans.

Charly, a UK label that specialises in re-issues, quickly acquired the rights to Jungle Rock from King Records, and in March 1976, Hank Mizell’s Jungle Rock was officially released in the UK. That same month, the song started a 13 week run on the chart, eventually reaching the number 3 spot in May 1976.

Jungle Rock became an instant classic, not just in the UK, but in other European countries as well. In Holland, the song even made it to number 1. Meanwhile in the States, after hearing of Mizell’s success in Europe, producer Shelby Singleton wanted a piece of the cake. Singleton was connected to Charly (who owned the UK rights to Singleton’s Sun catalog) while Singleton also represented King Records in the USA. All this led to the release of Jungle Rock on Singleton’s Amazon Records label. Sadly, like had been the case in 1959, also the 1976 release of Jungle Rock was ignored by US DJ’s, causing the song to bomb for a third time on Mizell’s home turf.

To the right we see Amazon’s very rare promotional 45 of Jungle Rock.

Needless to say that the commercially released Amazon single, became yet another hard to find US pressing of Hank Mizell’s classic jungle song …

So, what was the fuzz all about in early 1976’s Europe?
Well, just click the ► button below, and hear for yourself! 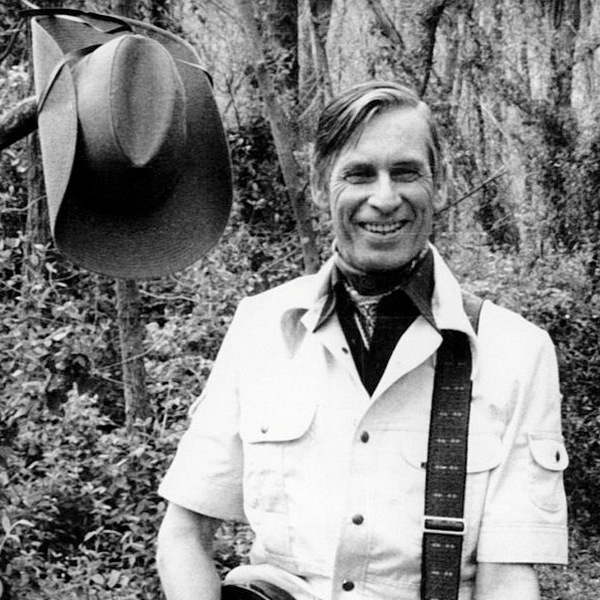 The following sources have been very helpful in compiling this article: