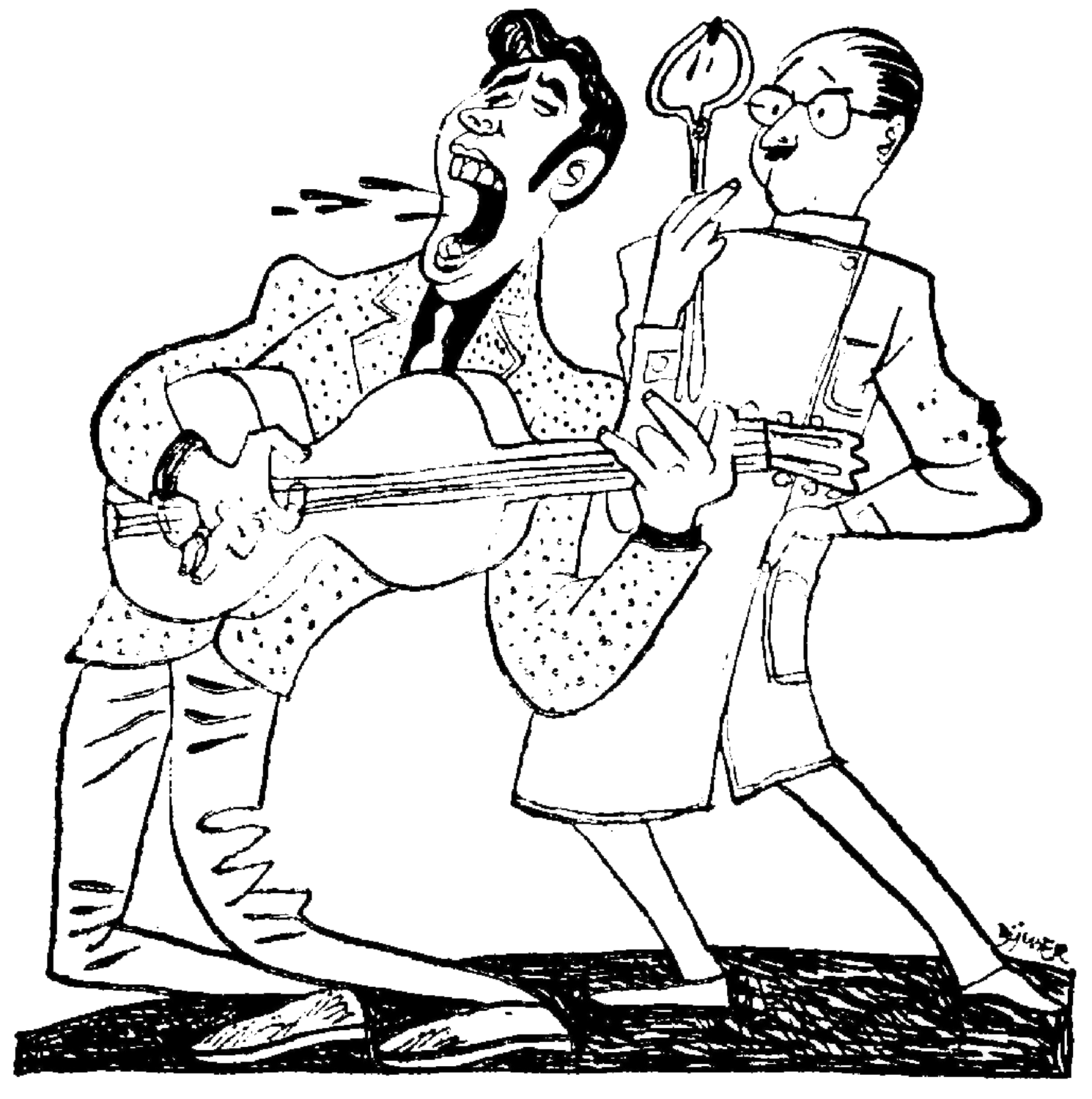 In mainland Europe during the 1950’s, reliable information about Elvis, was nearly impossible to find. In Holland, this void was filled in June 1959 by the It’s All Elvis fan club. Over 5000 Dutch fans subscribed to the club within the first few months of its existence. In this article we present one of the club’s earliest fan magazines.

The wealth of information that was supplied by the first fan clubs, sometimes included false information as well. Not to mention that the fan club mags were often riddled with grammatical errors. But these happy accidents only add to the charm of reading an Elvis fan club magazine over 60 years after it was originally published.

Sadly, the 12-page It’s All Elvis fan club magazine, as well as its supplements, are only accessible to Dutch speaking visitors. But additional information in the English language has been given so that all visitors can get a taste of early Dutch fan club life.

The most interesting article in this magazine can be found on page 8. Through the story on this page, the reader is told that a movie version of West Side Story is in the pipeline, and it was likely to include “The big five”: Bobby Darin, Paul Anka, Frankie Avalon, Fabian, and Elvis Presley. As we know, Elvis was indeed offered the role of Tony, but Parker declined. It’s also known that Bobby Darin came real close to starring in the movie. In the end, none of the big five were in the cast, but West Side Story went on to win an incredible amount of 10 Academy Awards after it had been released in October 1961, two years after it was first mentioned in the Dutch mag.

RCA Victor clearly had a hand in the Dutch Elvis fan club: of the mag’s 10 inner pages, 2 are full-page advertisements for Paul Anka and Johnny Restivo, who both recorded for RCA, while nearly a whole page is dedicated to RCA’s upcoming new talent Neil Sedaka.

Fan club magazines often came with supplements. And this particular issue came with two of these, both of which are also presented on this page. The first is a double-sided sheet containing an Elvis biography up to that point (“His Life Story”). The second is a double-sided page that lists Elvis’ records. Further proof that RCA sponsored the Dutch fan club, is the fact that only the records that were still available at that time (December 1959) were listed. After all, if this discography had served the purpose of showing Evis’ complete musical output, it would surely also have included the records that were no longer on the market.

Also presented on this page, even though it was not actually included with the November/December 1959 issue of the magazine but with a later issue, is a very interesting personal letter from Elvis to the fan club’s secretary, Theo van de Bilt, dated July 15, 1960. 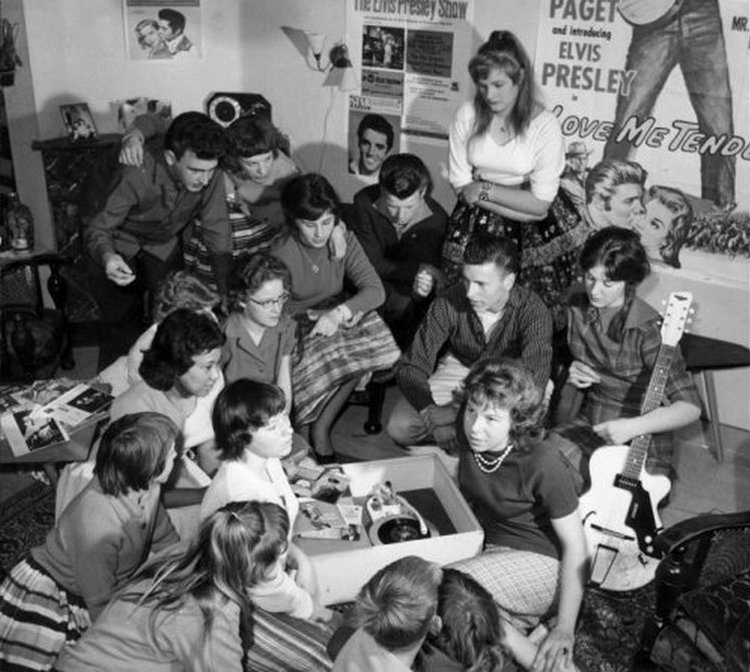 To the right we have a nice photo that was taken during a meeting of the It’s All Elvis fan club in early 1960. The girls outnumber the boys 3 to 1, which was probably a faithful representation of the Elvis fan world in those years. The group is enjoying their Elvis records and we can spot the EP The Real Elvis and the 45’s of A Big Hunk O’ Love and Stuck On You on the record player. The guy on top to the left is Daan Vergunst, the chairman of the fan club. His name is mentioned on page 6 of the fan club magazine below.

The Love Me Tender poster in the back, is the American 3-sheet. To the left of this, we see a poster announcing The Elvis Presley Show, an event that was held in Amsterdam in September 1959. Behind Daan Vergunst, we have the US insert poster of Loving You.

On the table to the left, we see copies of the It’s All Elvis magazine. 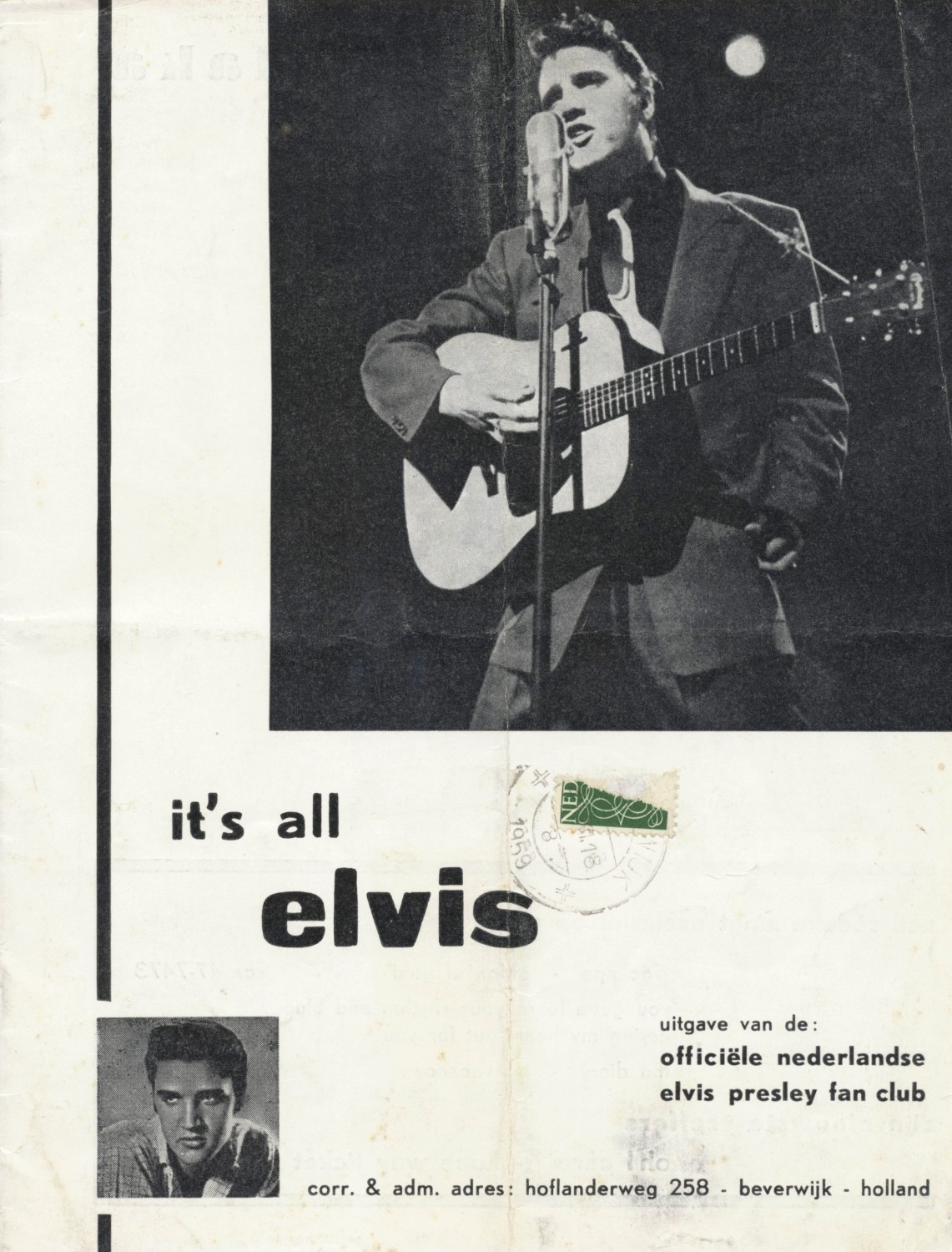 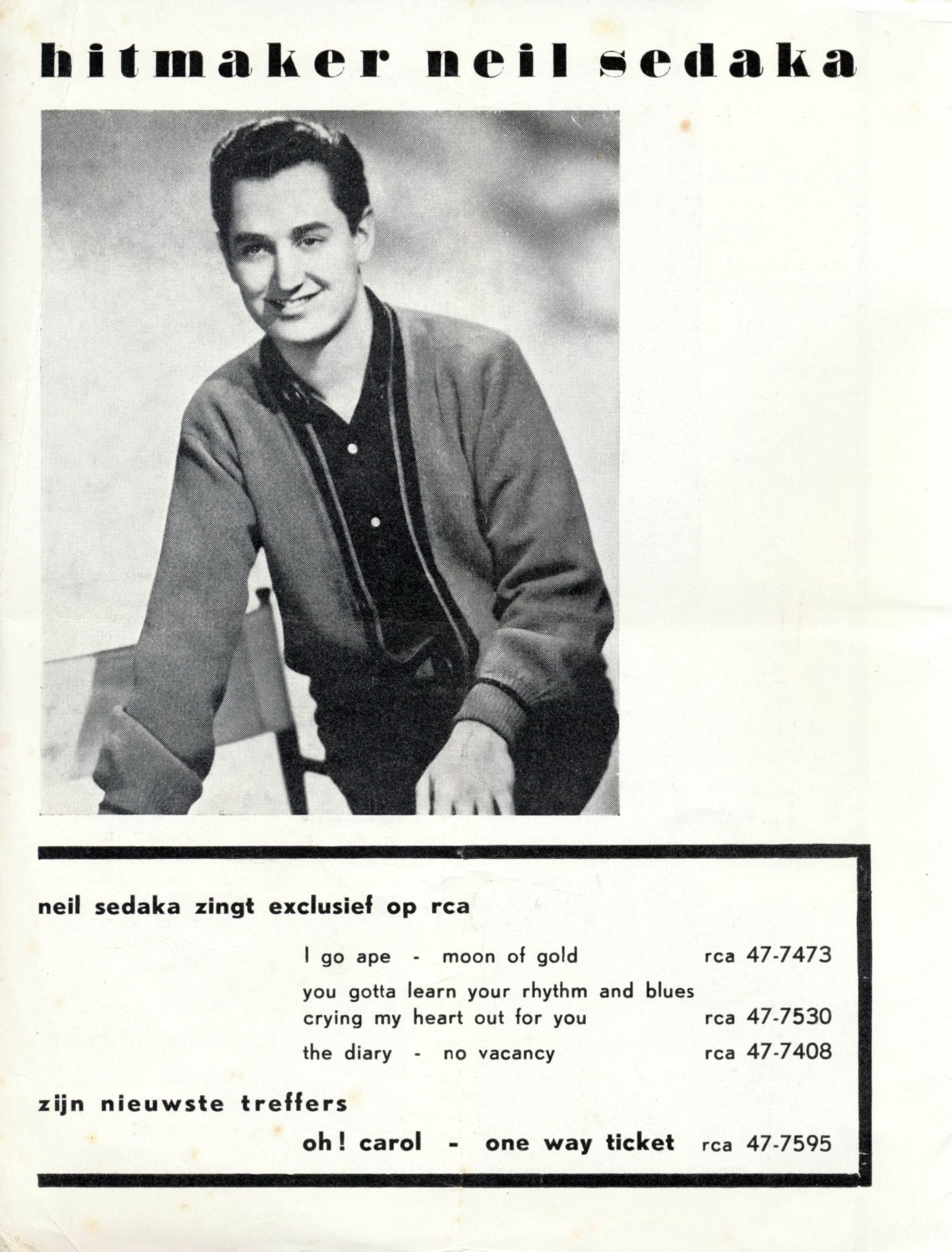 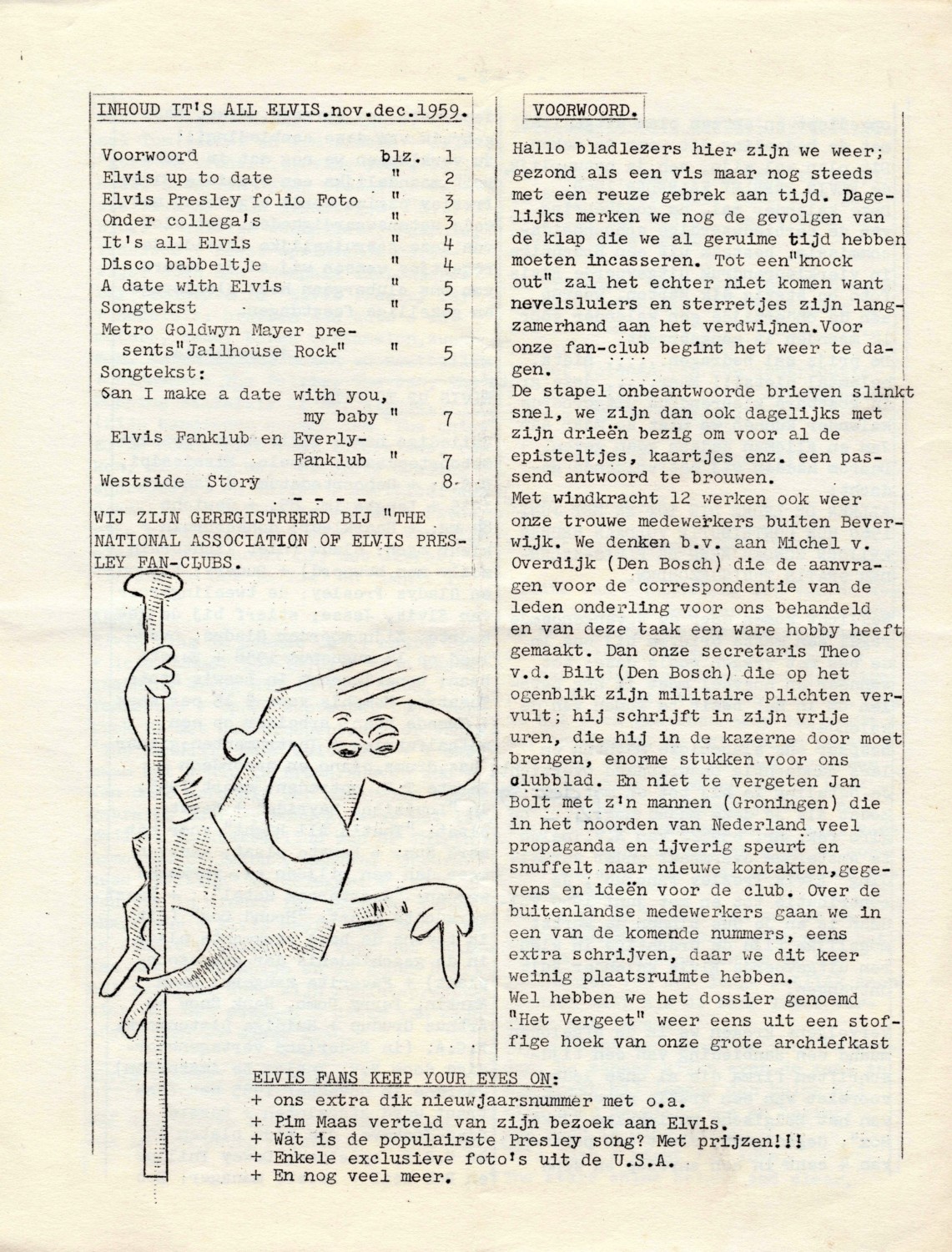 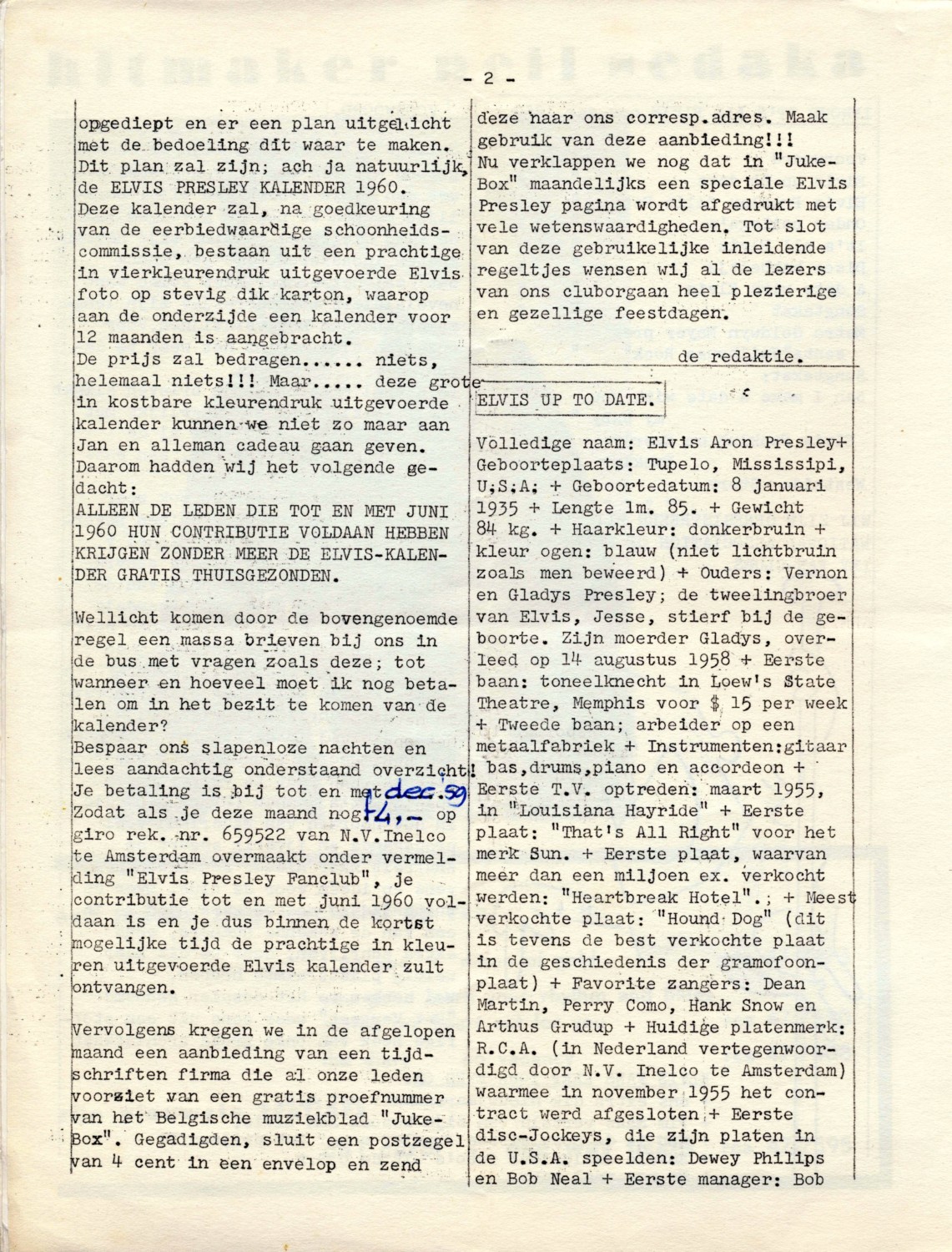 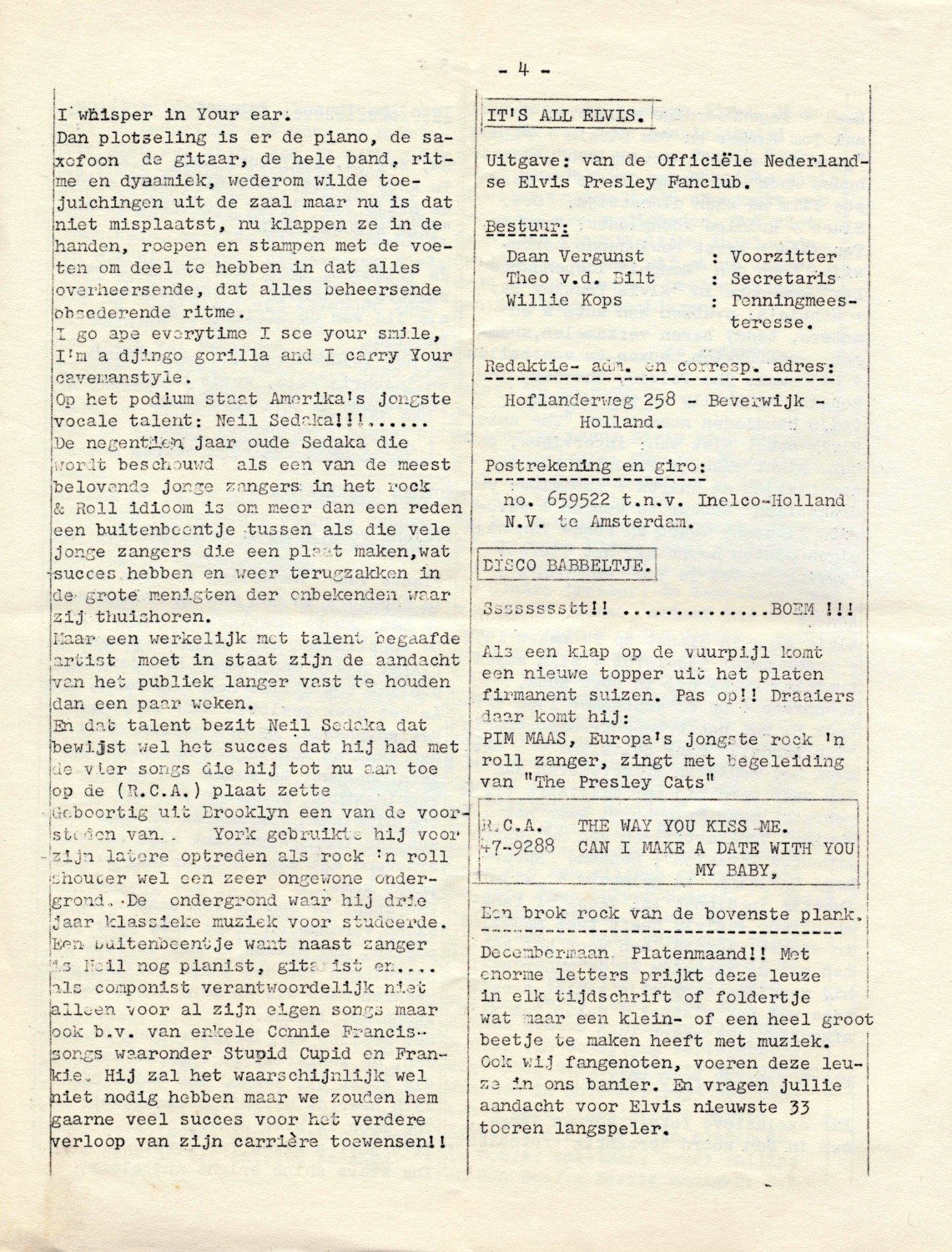 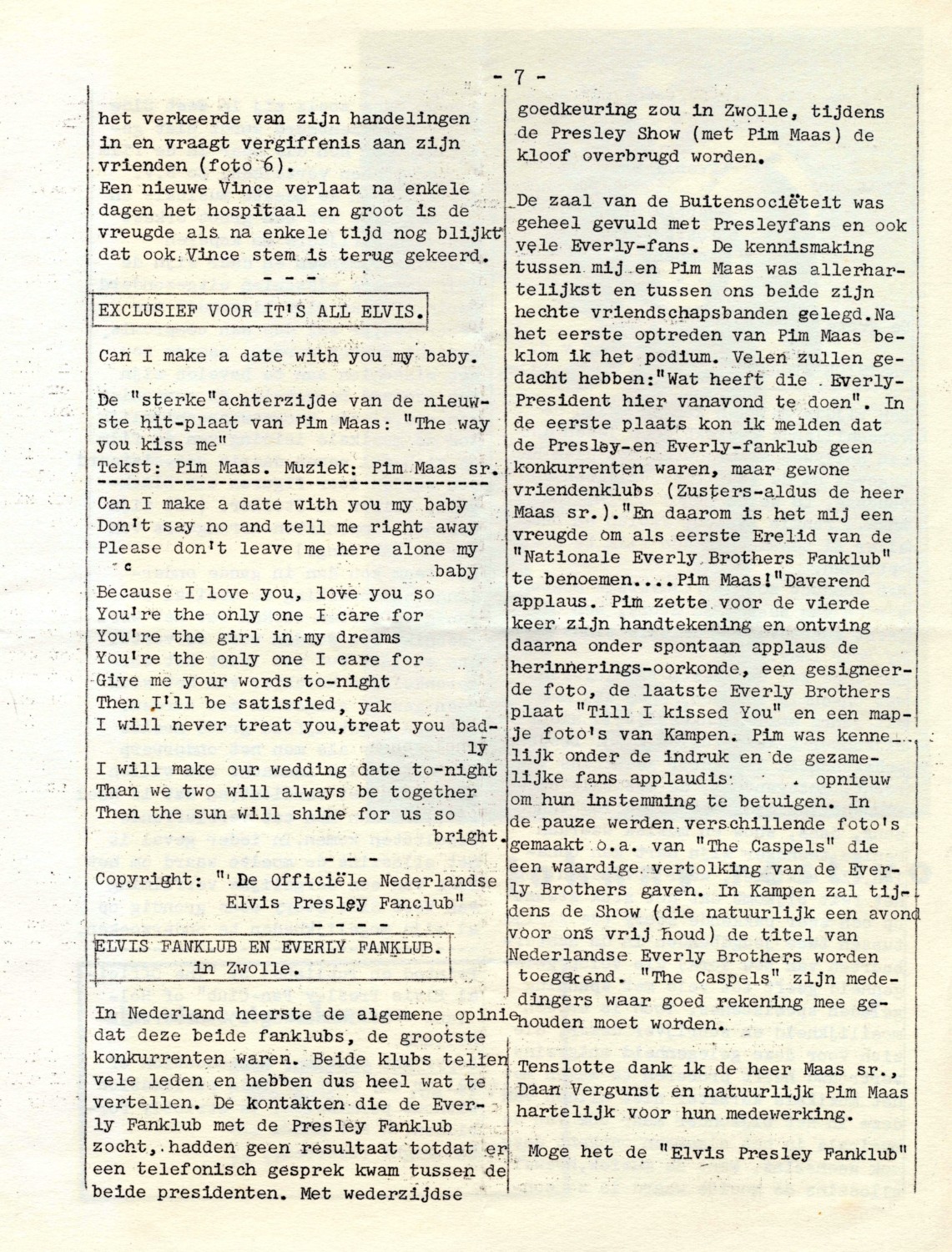 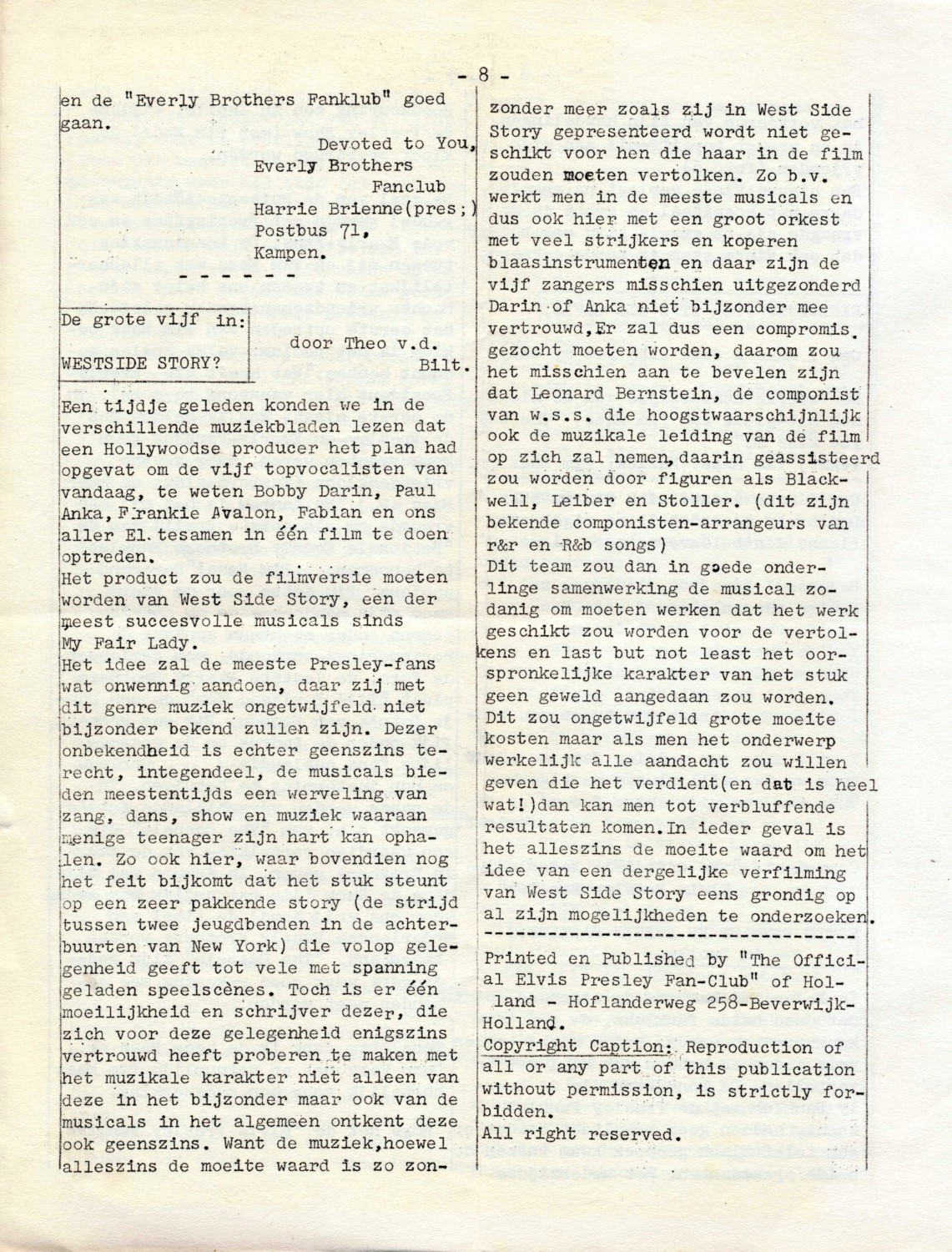 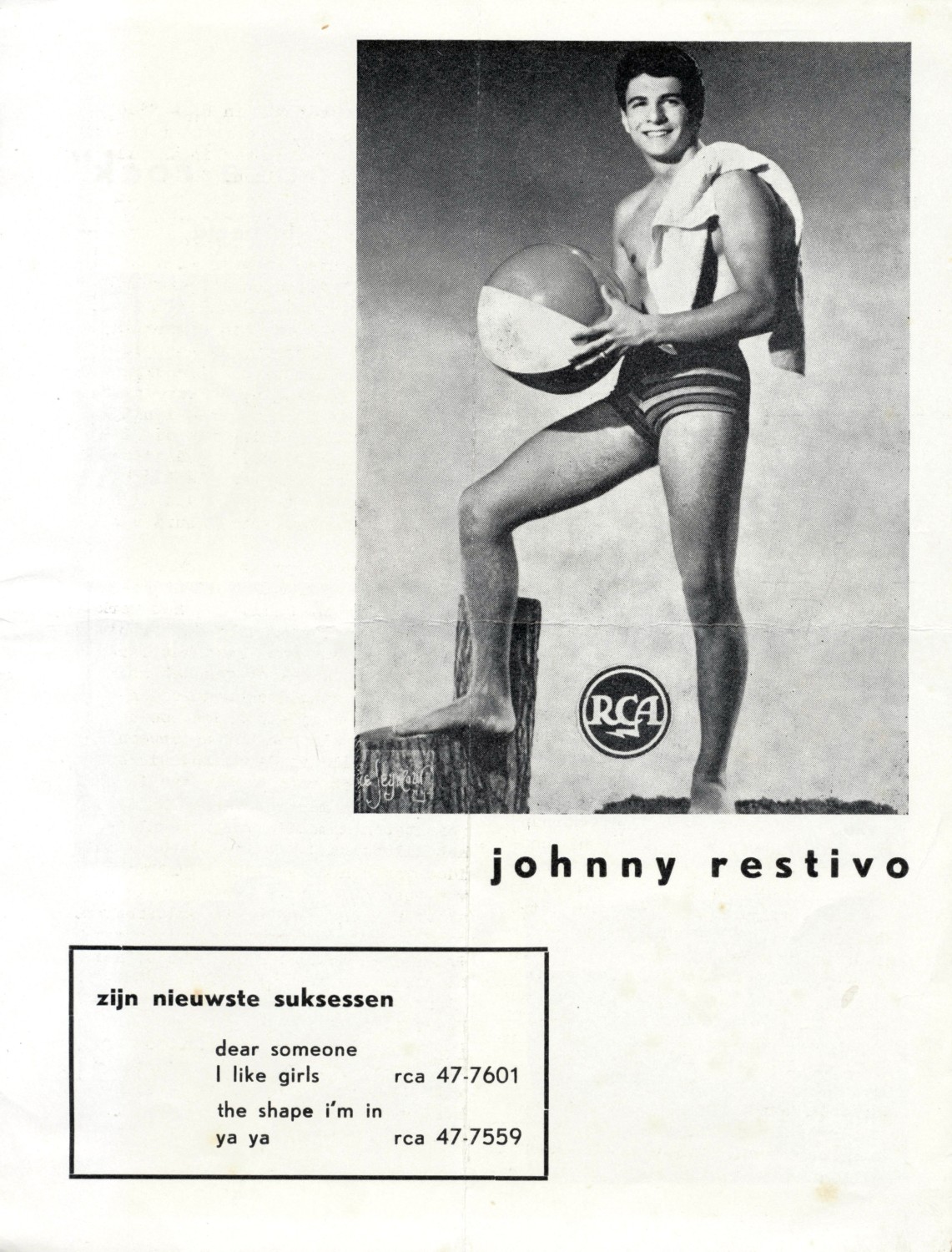 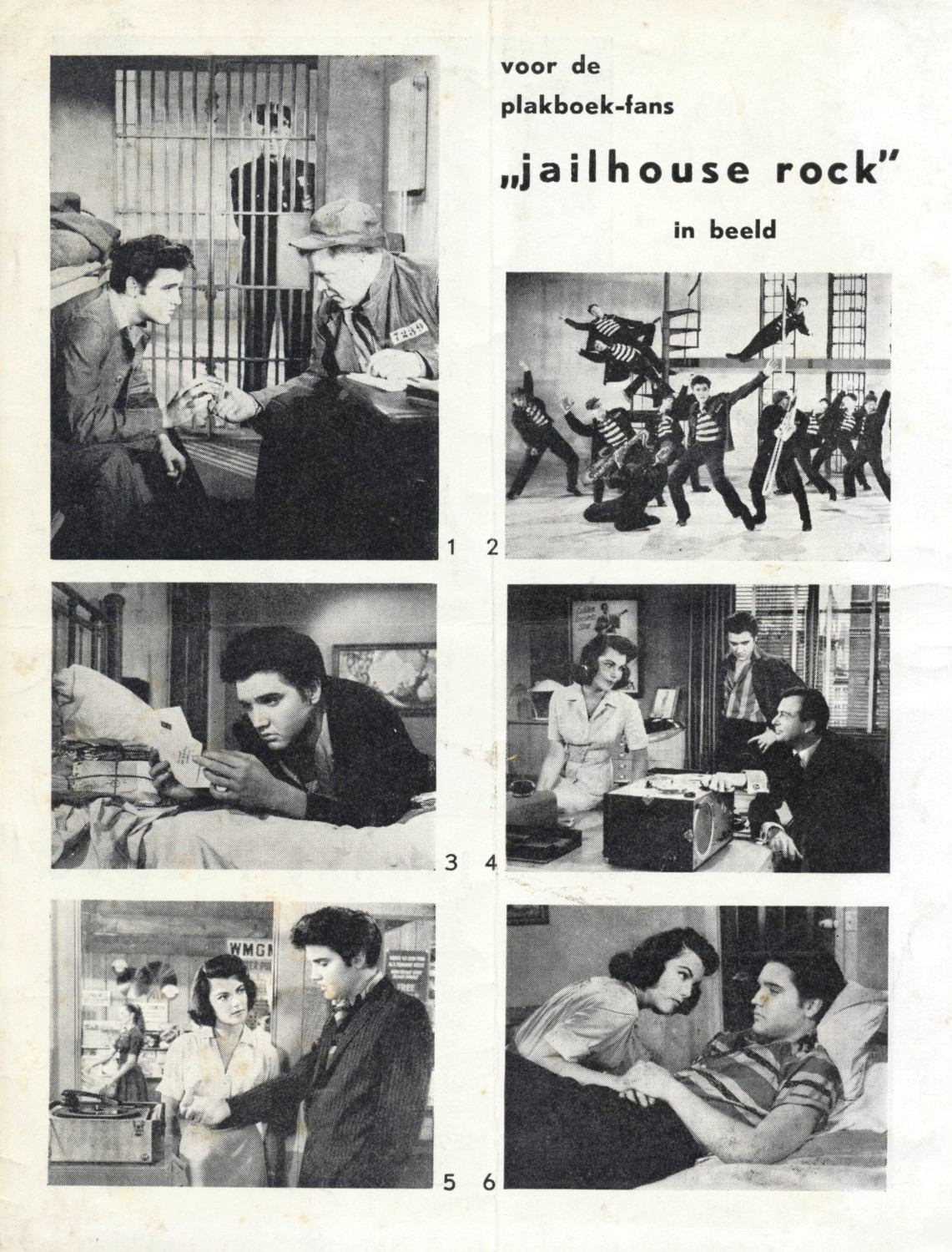 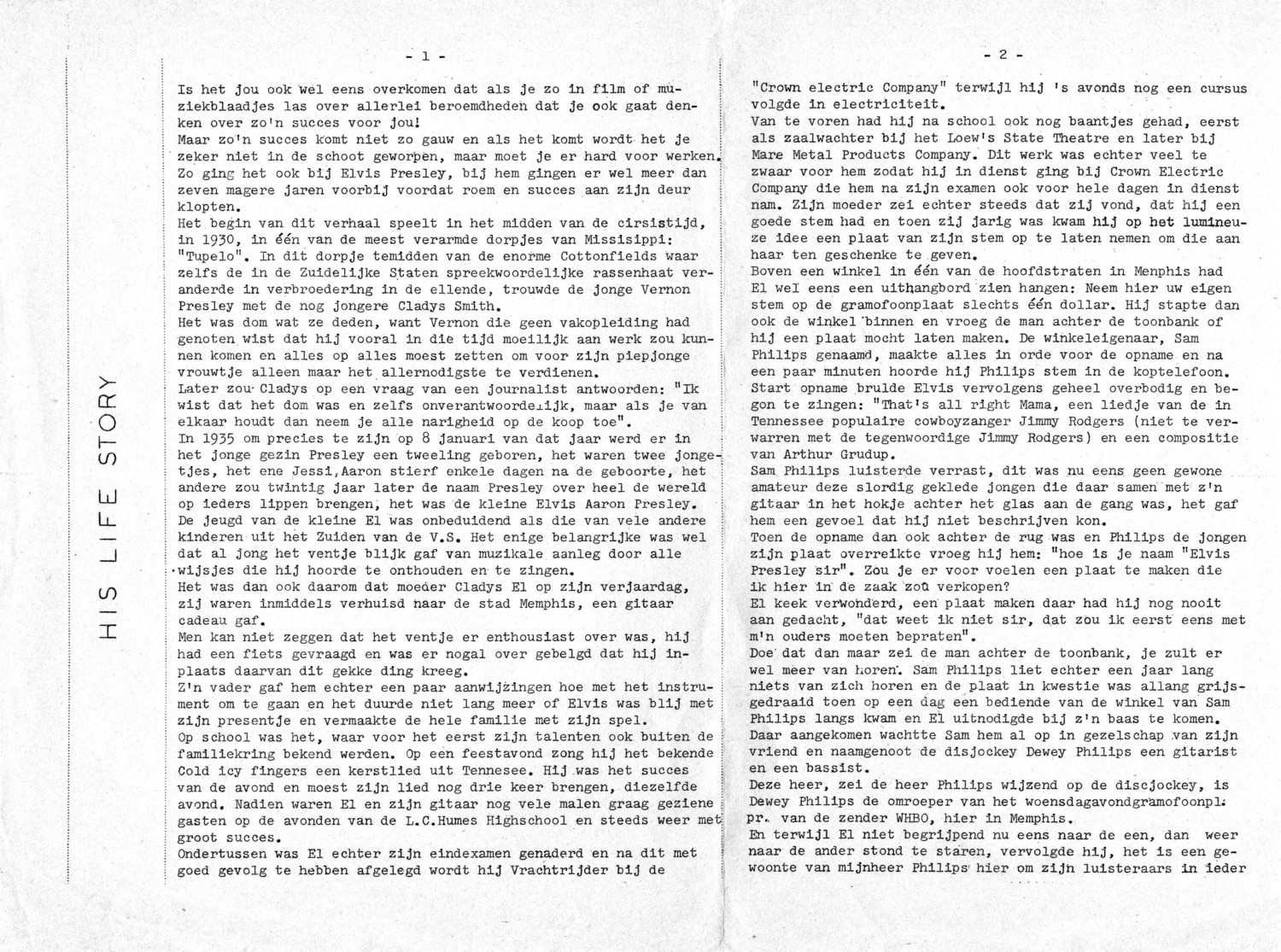 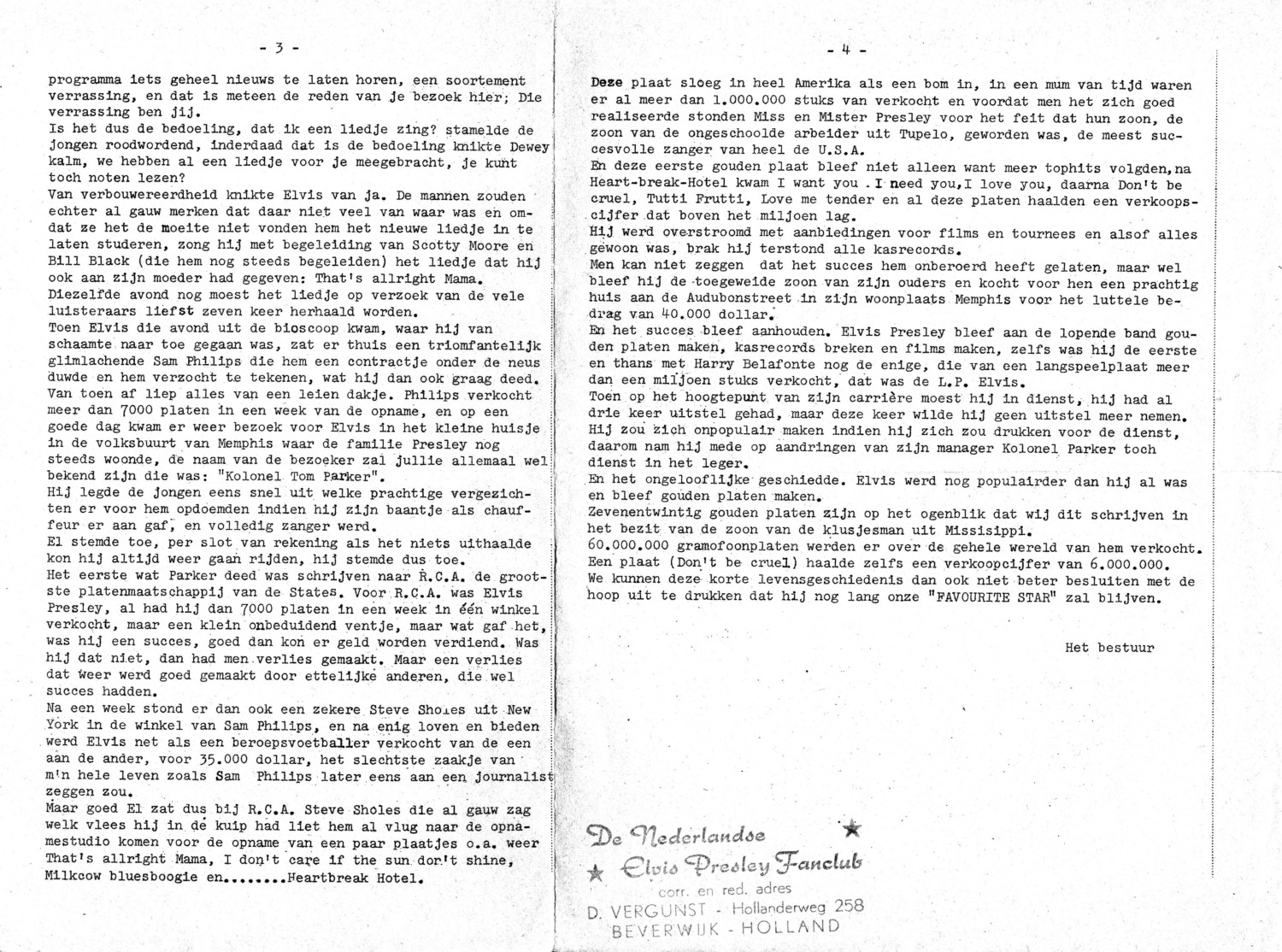 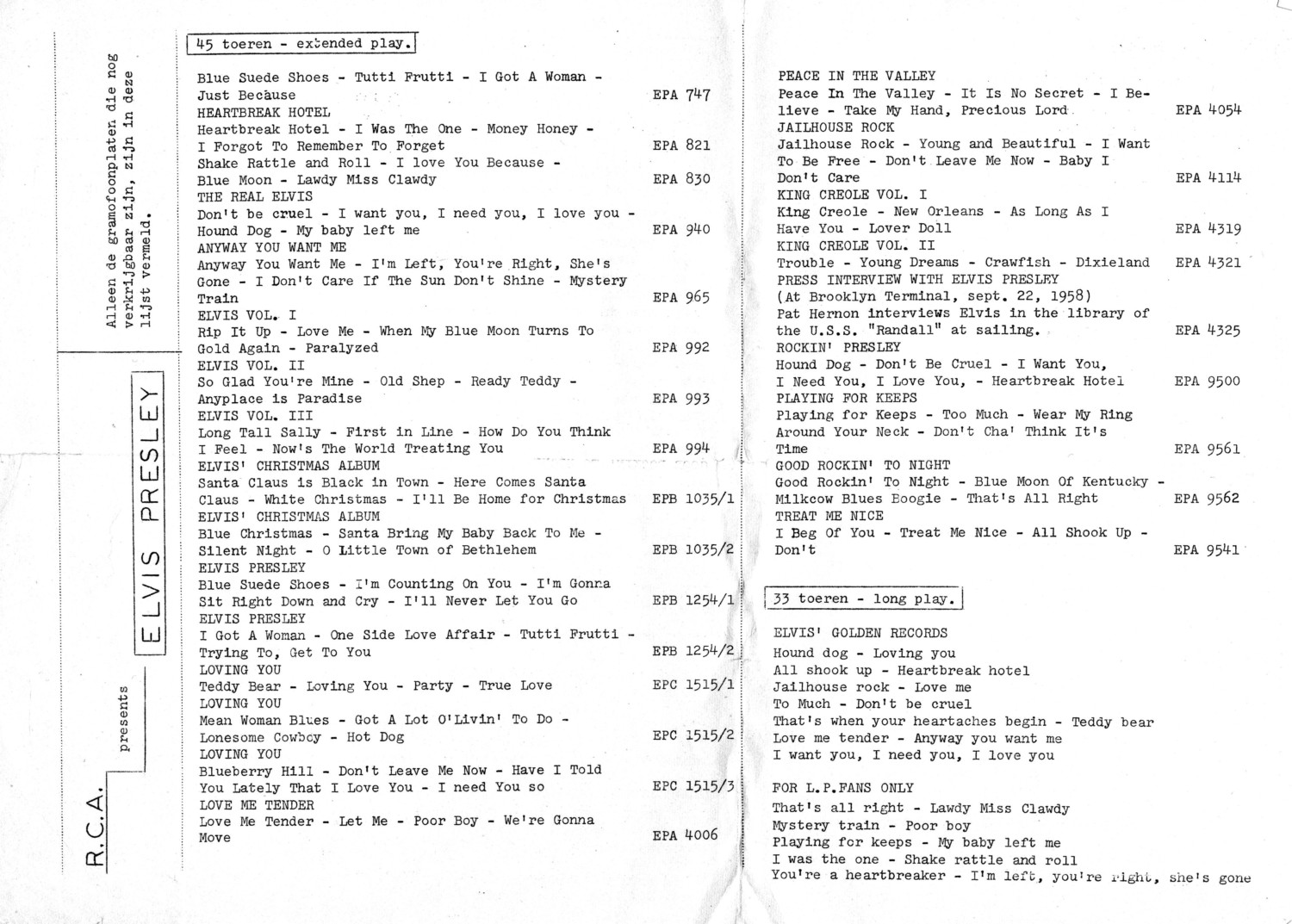 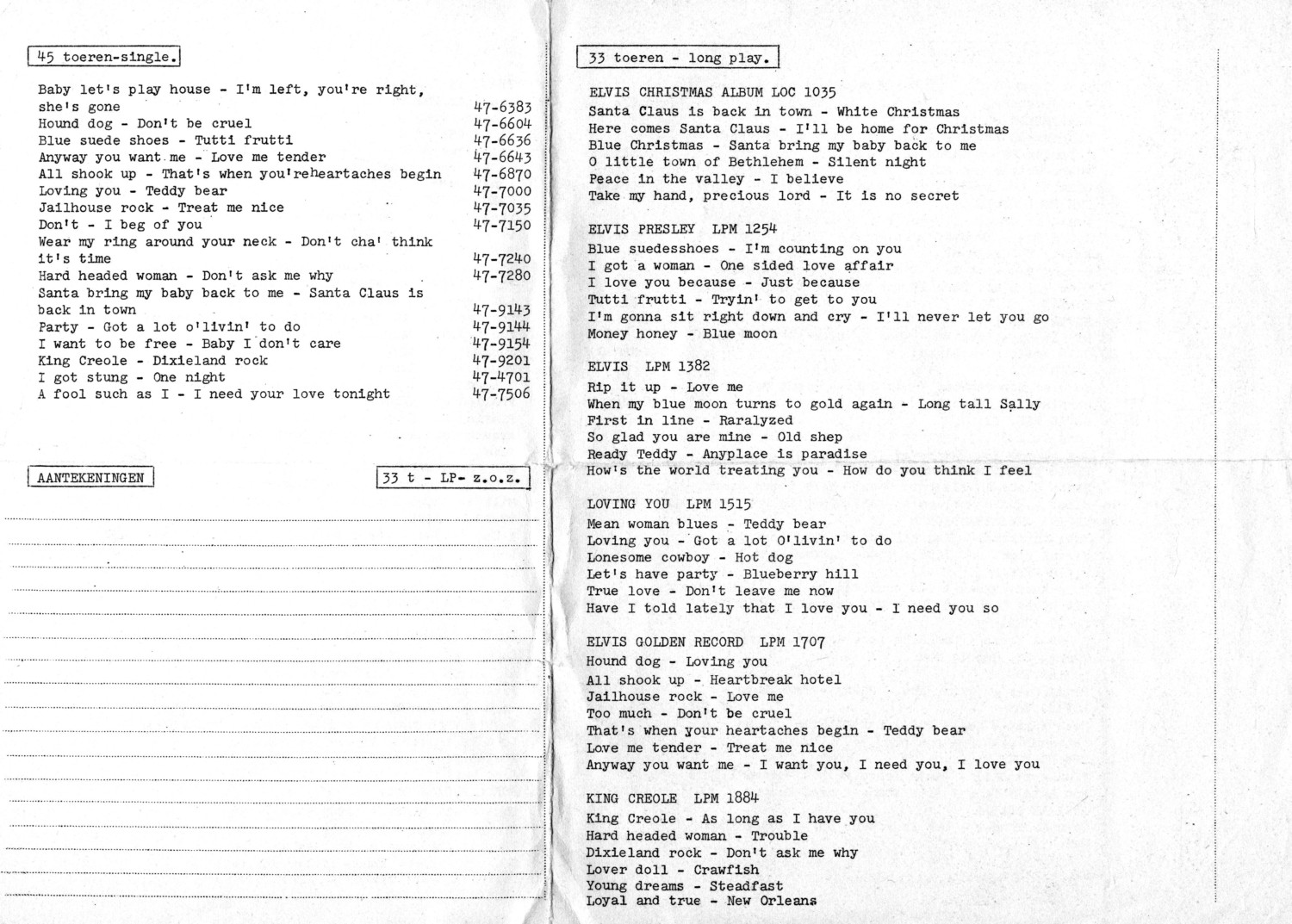 * Mentioned on the front sheet, is that the list only includes titles that were still available when this list was issued (December 1959).
* We can see that an incredible amount of Elvis EP’s were released by RCA Germany: 25 titles in a little over 3,5 years.
* The singles list only includes 16 of Elvis’ German 45’s, which is about half of what RCA Germany had released up until that point.
* Elvis’ most recent album, A Date With Elvis, is not part of the list, but it does get a mention on page 5 of the magazine.
* In the LP list, Golden Records is mentioned twice by mistake. 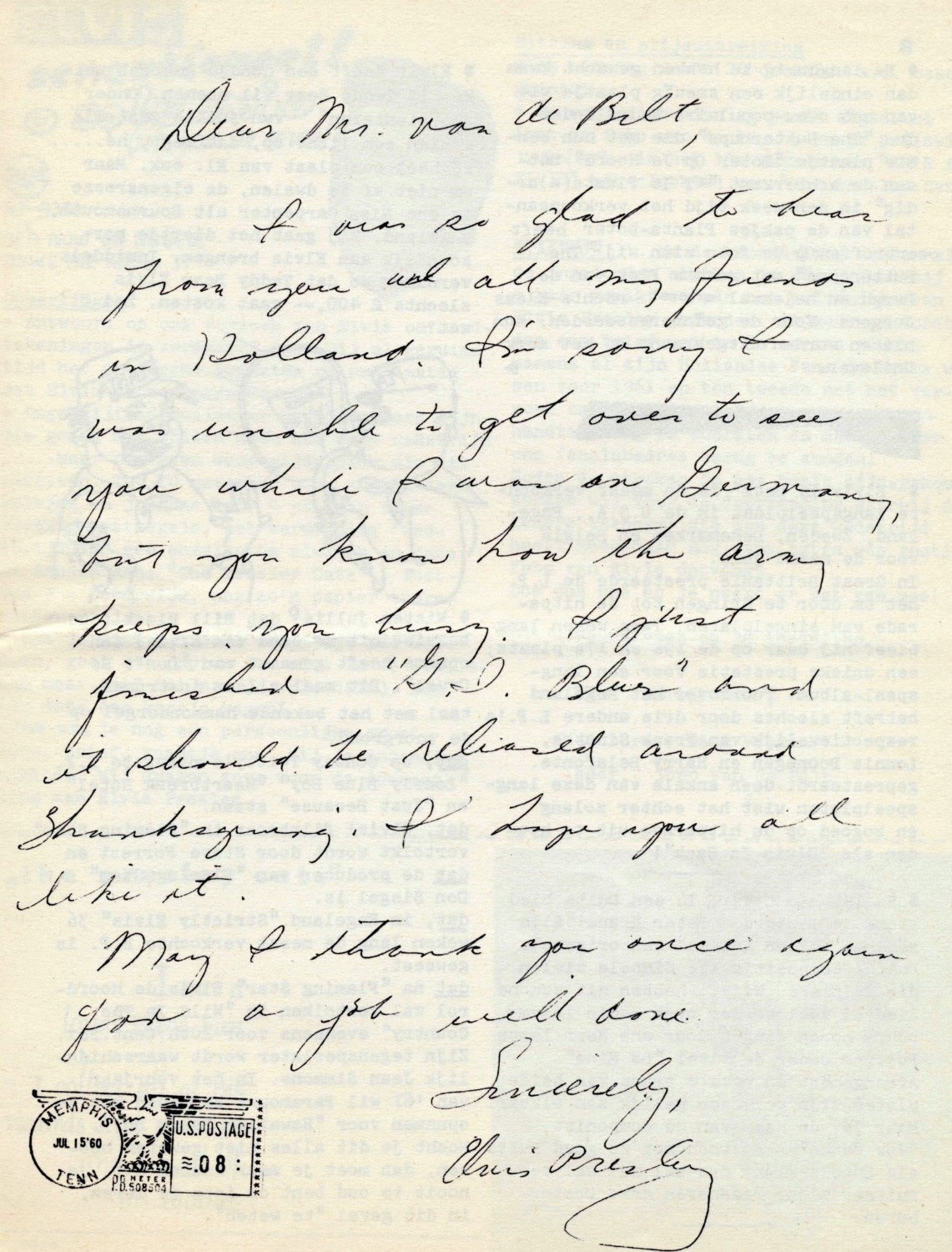 I am so glad to hear
from you and all my friends
in Holland. I’m sorry I
was unable to get over to see
you while I was in Germany,
but you know how the army
keeps you busy. I just
finished “G.I. Blues” and
it should be released around
Thanksgiving. I hope you all
like it.

May I thank you once again
for a job well done. 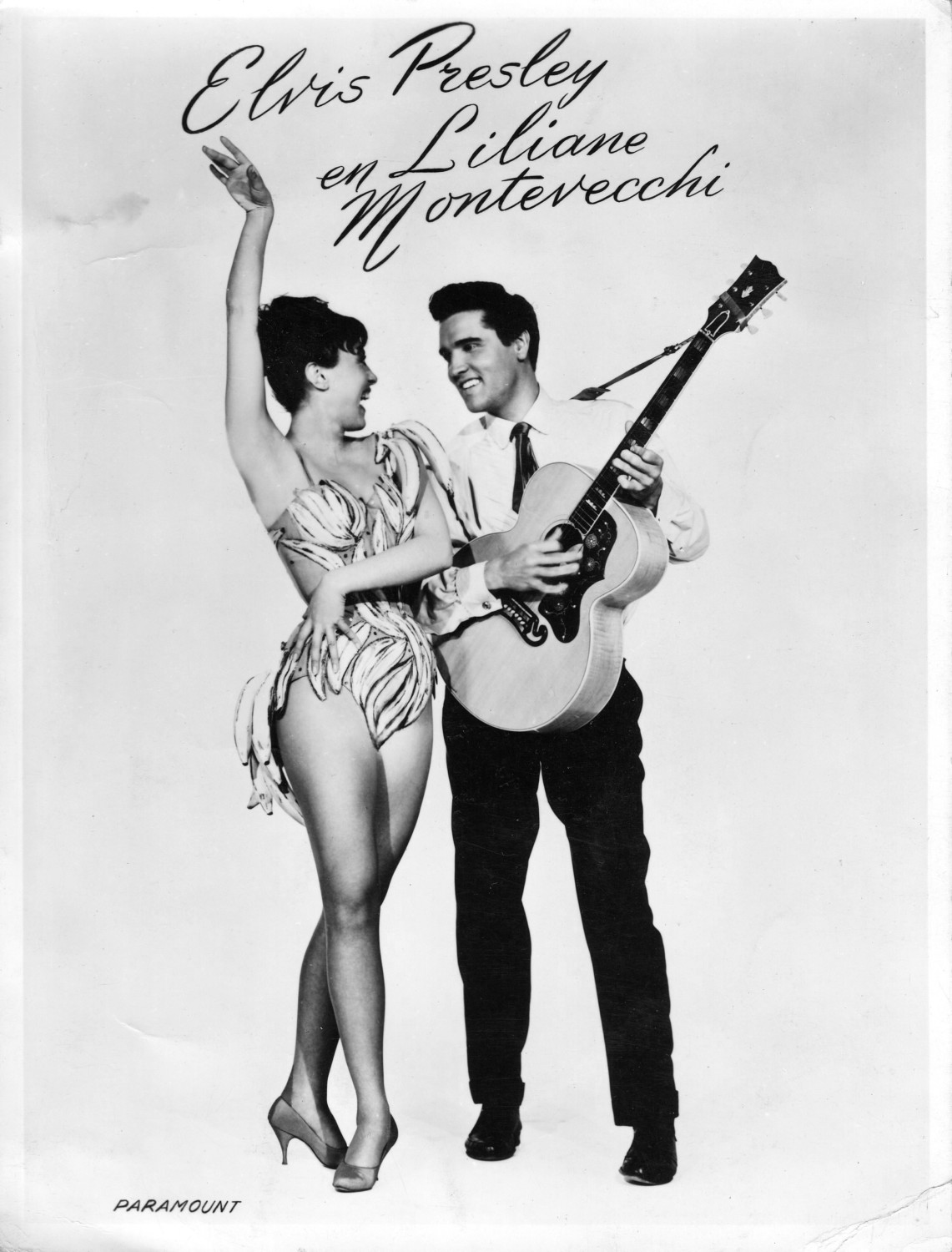 The documents that are presented on this page, were scanned and provided by Dutch fan/collector Willem Kaauw. Willem is the owner of the web’s longest standing and most active Elvis forum: WWW.ELVIS-COLLECTORS.COM
Many thanks to Willem for sharing these wonderful pieces of Dutch Elvis history with the fans!

Also thanks to the late and great Ger Rijff, who helped with additional information and images.


The postcard we see to the right, was issued in Holland in the late 1950’s.