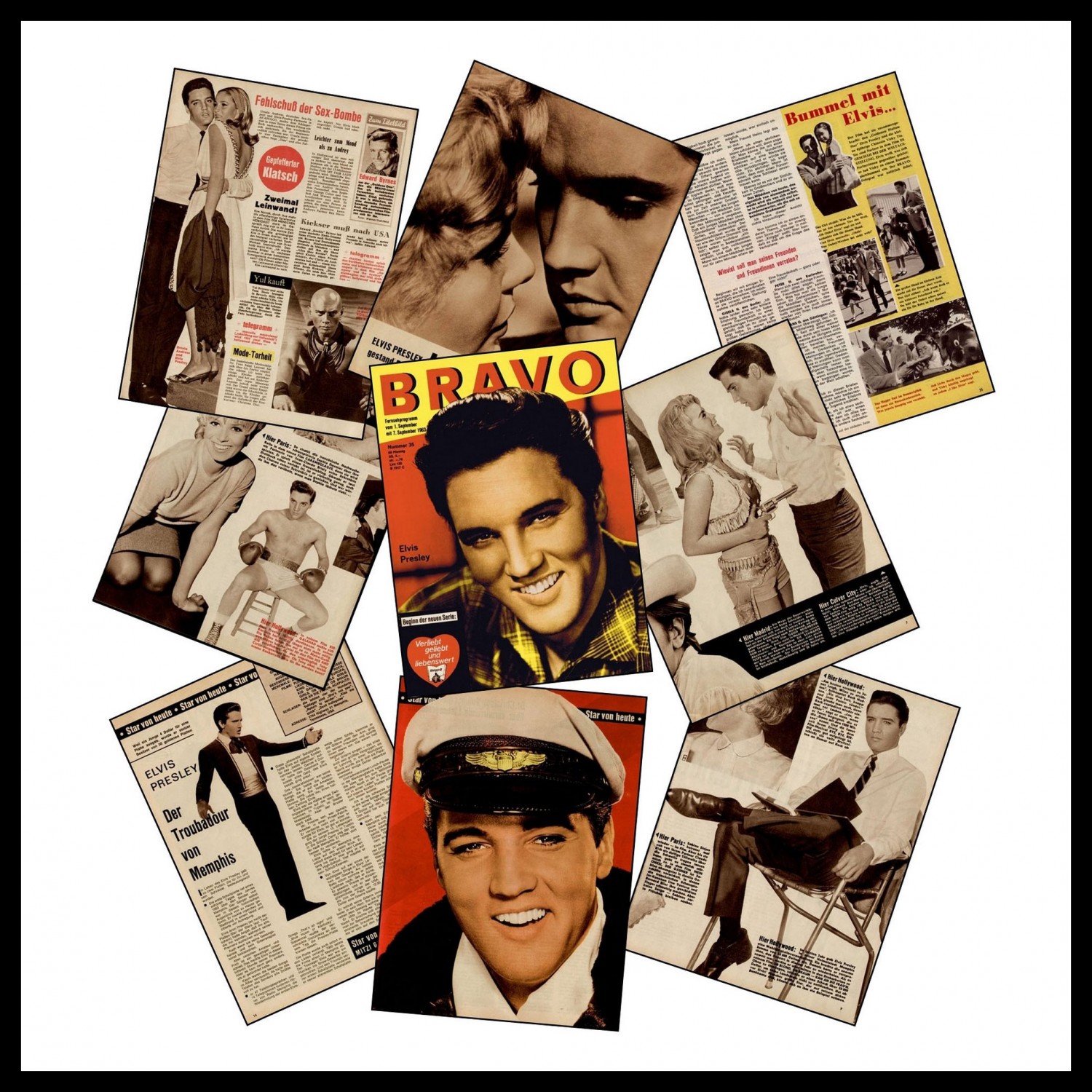 Here we have the second installment of the Elvis in BRAVO chronology!

By 1963 Elvis was seriously growing out of touch with his fans. He spent most of his time in Hollywood and hardly appeared in public anymore. And with the exception of the Devil In Disguise single, the only new music released in 1963 were soundtrack-songs. At this point the movies weren’t yet that bad, but Elvis’ career had become so predictable that even his loyal fanbase of editors at BRAVO found it hard to publish a newsworthy article about him.
The articles this year (and the word ‘article’ is really stretching it since in most issues Elvis only gets a rather minor mention) nearly all involve something that went on on a movieset. Apart from the images, there is really nothing interesting about Elvis’ 1963 articles in BRAVO, and I guess they would have fit the gossip-section of any tabloid magazine much better.

So, before we dive into the far more interesting year of 1957, here is a chronological overview of every Elvis-related article that appeared in BRAVO magazine in 1963! 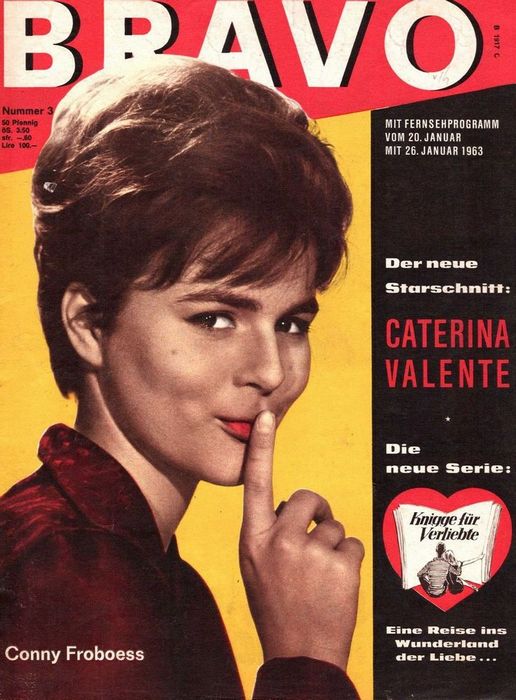 In this issue we find the first of only two 2-page articles in 1963.

ELVIS PRESLEY ADMITTED TO BRAVO: “I’M AFRAID OF GETTING MARRIED”
Marriage or career?
The only question Elvis was asked by BRAVO-reporter Edith Dahlfeld in this ‘interview’ was: “Is it true, what Colonel Parker is saying, that you are not getting married because it will damage your career?”.
Elvis’ answer was that this was not the case at all but that none of the girls he had ever met could compare to his mother. His future wife would also have to settle for his peculiarities and the things he would not give up for any woman:
* his hobby of collecting Cadillacs
* his love for pork chops and apple pie
* his complicated thoughts when choosing new film roles
* his entourage (who are always present)
* his jukebox at home that plays all through the day
Apparently Elvis concluded by saying: “But if the right one comes along, I’m getting married. Even if it would cost me my career!” 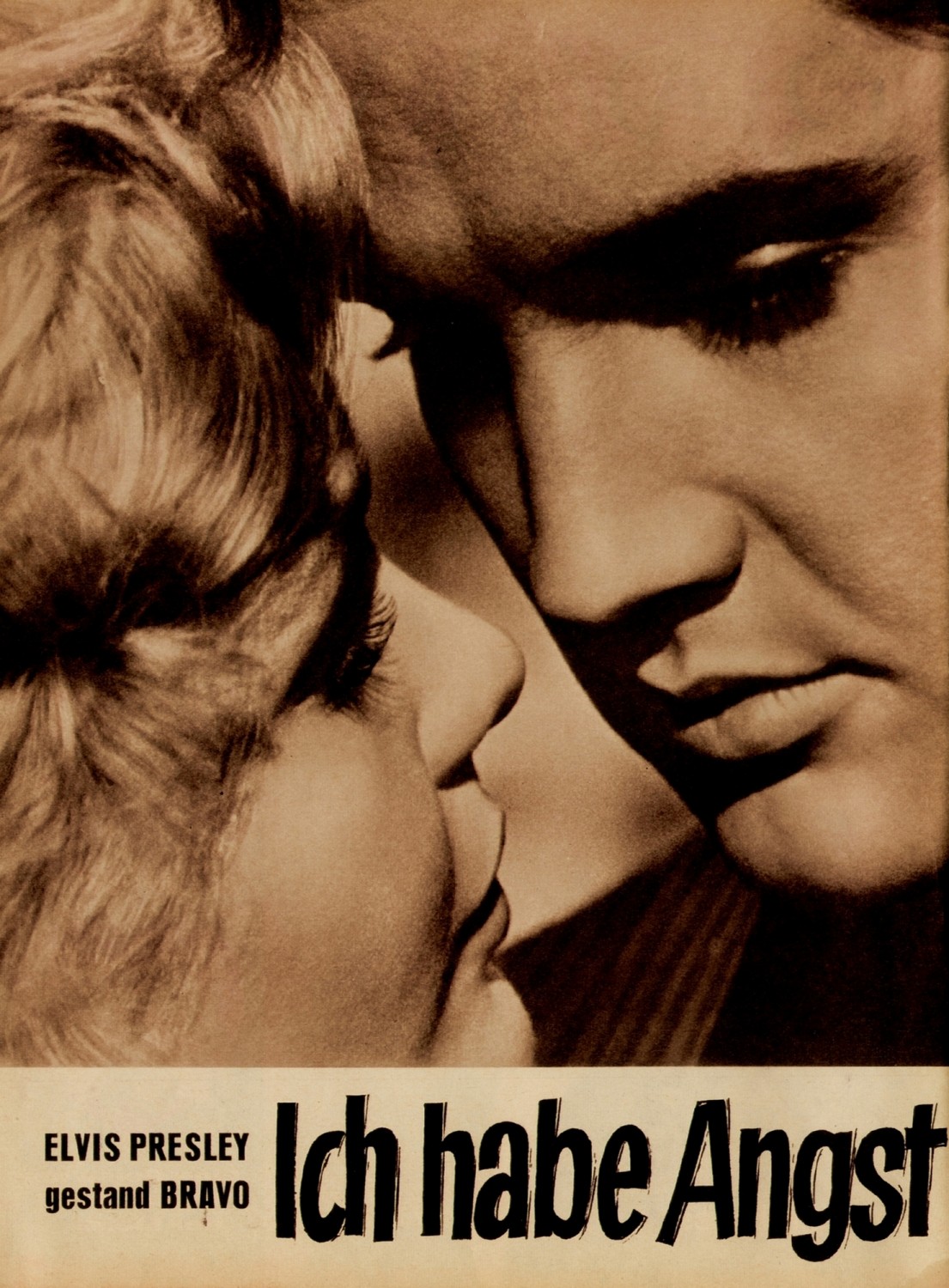 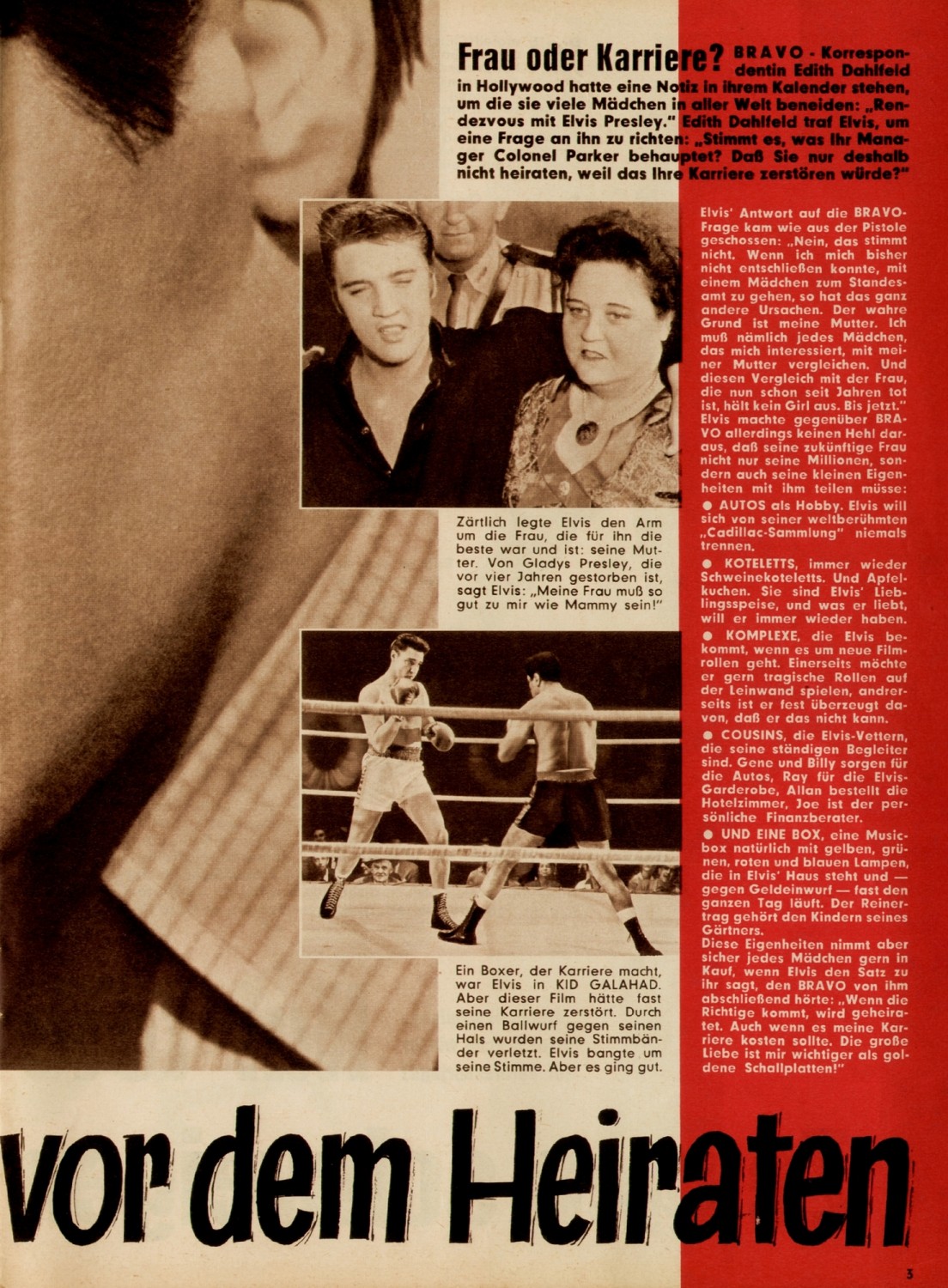 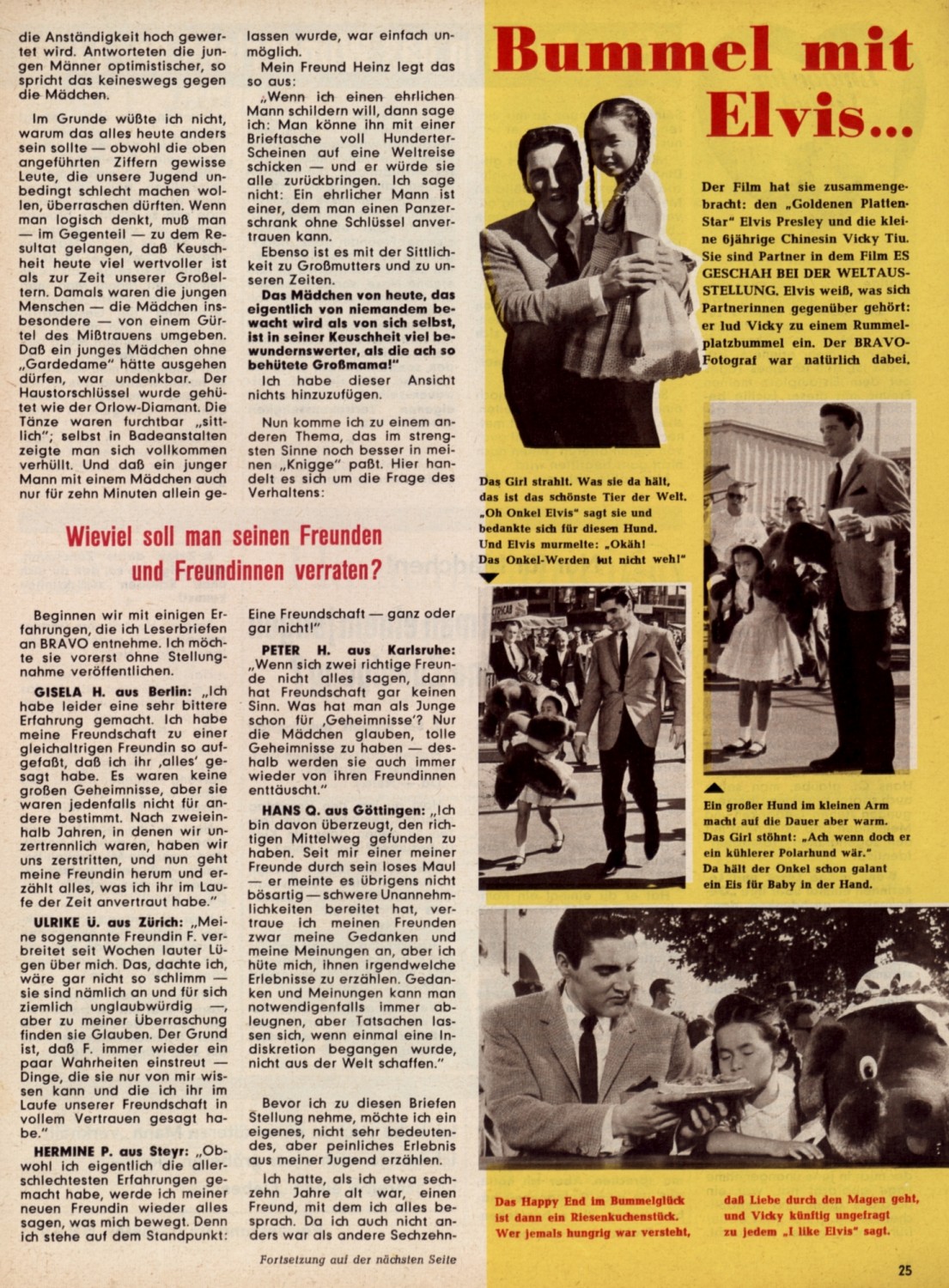 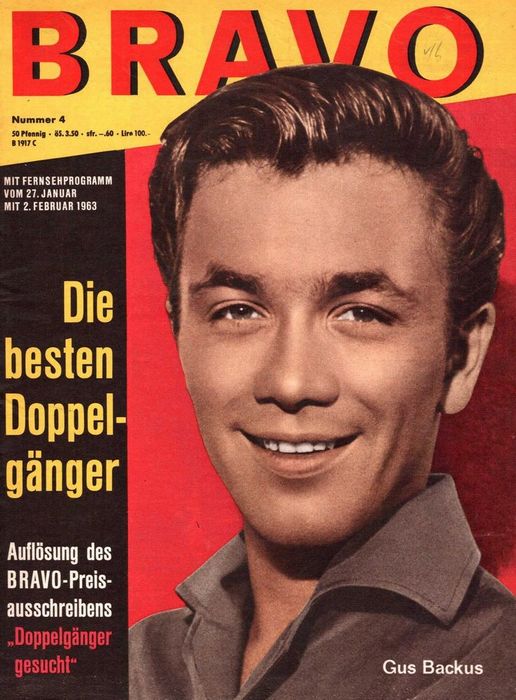 STROLLING WITH ELVIS …
“The film has brought them together: the “Gold Record Star” Elvis Presley and the small 6 year old Vicky Tiu from China. They are partners in the film IT HAPPENED AT THE WORLD’S FAIR. Elvis knows how to treat his partners: he invited Vicky to a stroll on the fairground. The BRAVO-photographer was there of course.”
* “The girl is delighted. What she is holding, is the most wonderful animal in the world. “Oh uncle Elvis” she says while thanking for this dog. And Elvis mumbled “Okay! Being an uncle doesn’t hurt a bit!”.
* “But a big dog in those small arms warms the body. The girl sighs: “If it were only a cool husky”. But the galant uncle already holds an icecream in his hand for her.”
* “The perfect ending for this fairground-happiness is a giant piece of cake. The way to a man’s heart goes through the stomach, and Vicky keeps on saying “I like Elvis” to anybody listening.” 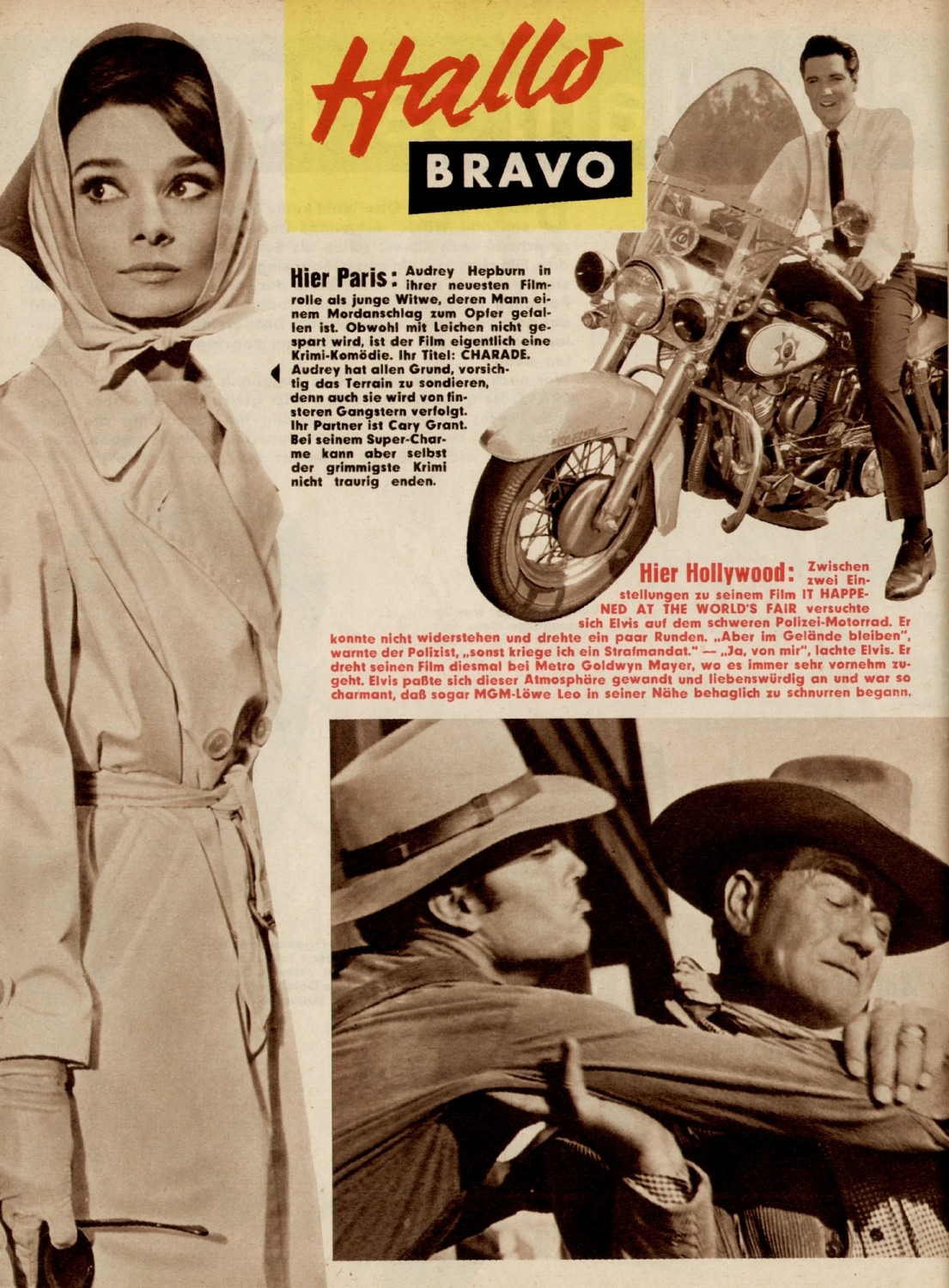 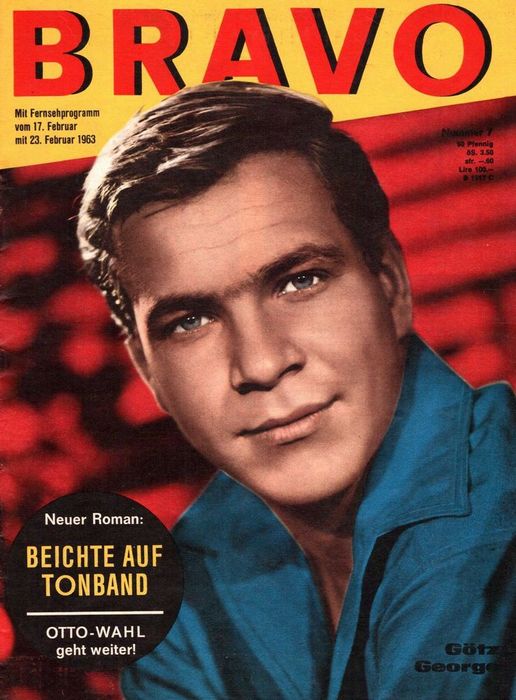 HOLLYWOOD REPORTING:
“Between two scenes for his new movie IT HAPPENED AT THE WORLD’S FAIR Elvis tried out a heavy policeman’s motorcycle. He could not resist and rode a few rounds. “But stay on the set” the policeman warned him, “otherwise I’ll be punished”. “Yes, be me” Elvis smiled. This time he is filming for Metro Goldwyn Mayer, where things always go according the rules. Elvis adjusted to this so easily, and he was so charming, that even MGM-lion Leo began to purr.” 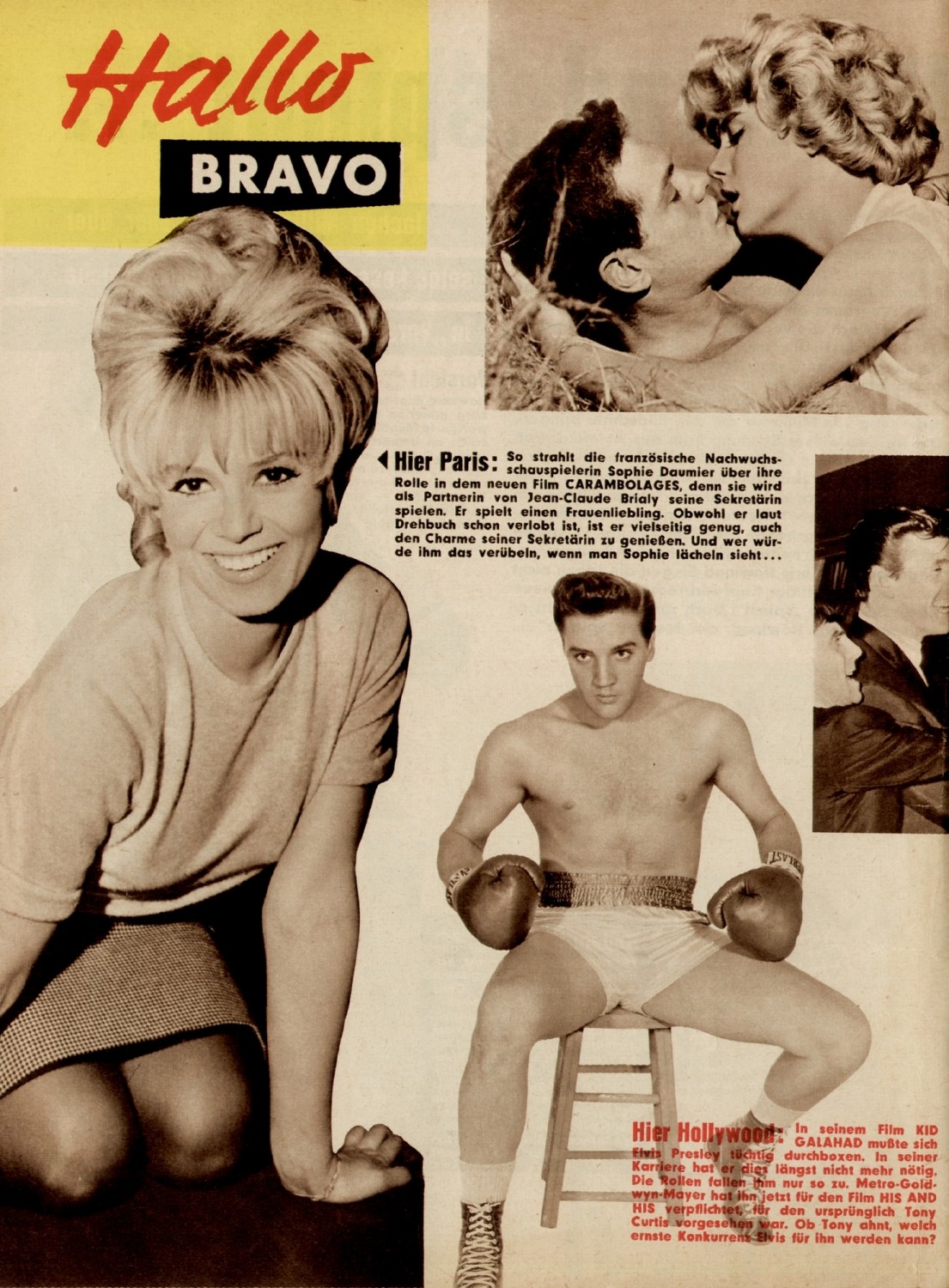 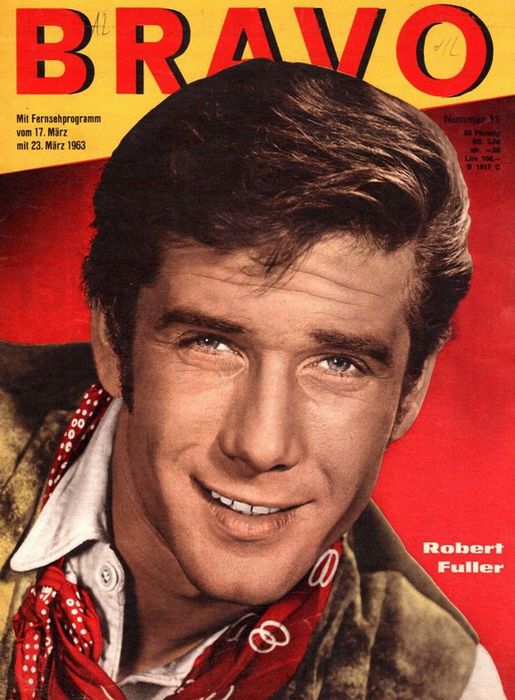 HOLLYWOOD REPORTING:
“Elvis had to fight his way through the movie KID GALAHAD. He no longer needs to fight for his career and he now has lots of roles to chose from. MGM have just signed a deal with Elvis for HIS AND HIS, a movie that orginally was to star Tony Curtis. Is Tony aware of the competition he receives from Elvis?” 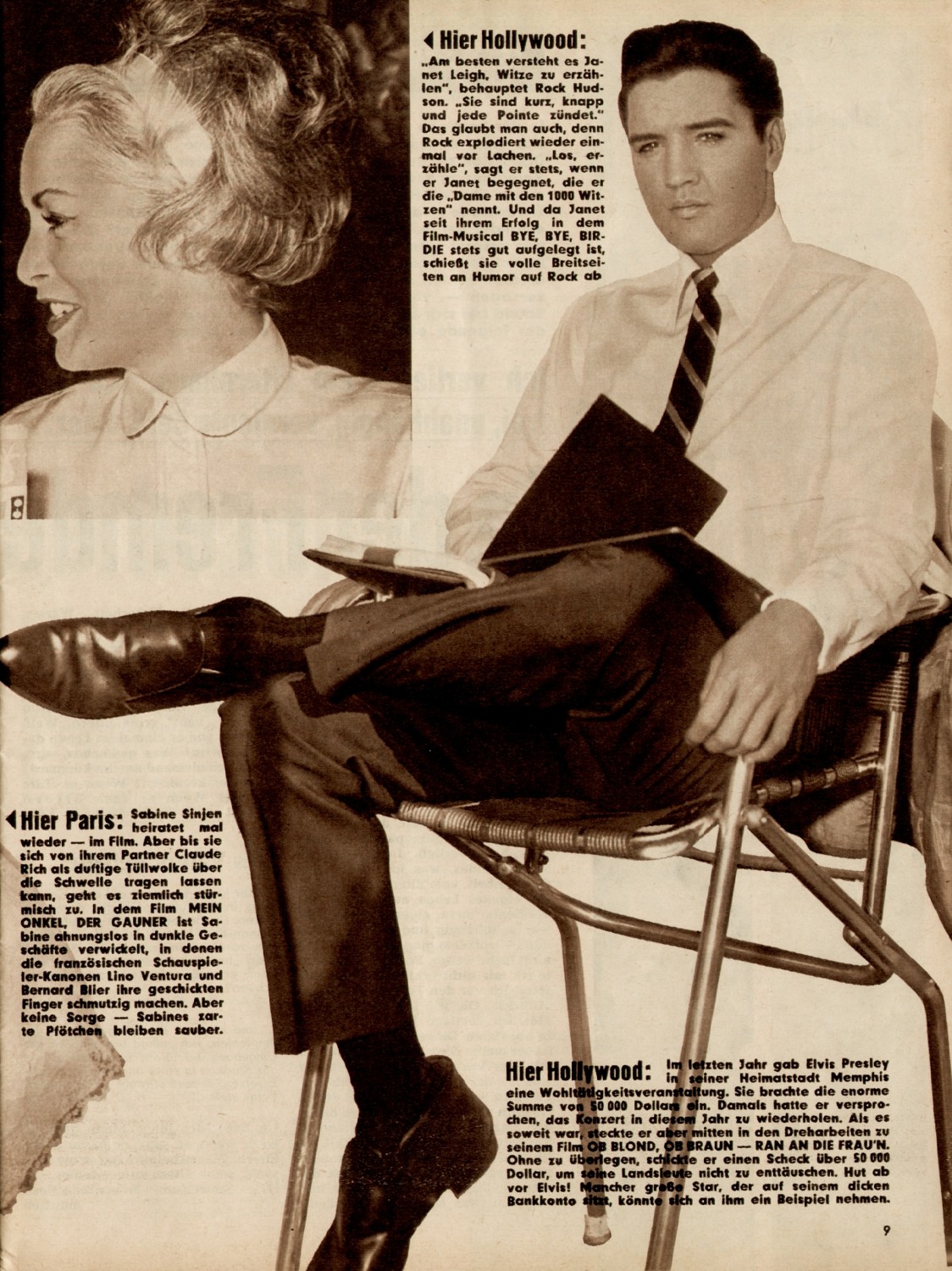 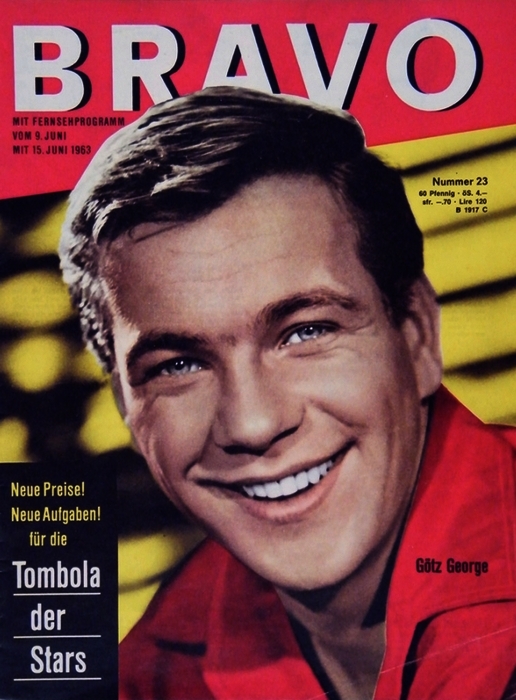 HOLLYWOOD REPORTING:
“Last year Elvis organized a charity event in his hometown of Memphis. An incredible amount of $50.000 was raised. Back then, Elvis promised to repeat the concert this year. But by that time, Elvis was very busy filming IT HAPPENED AT THE WORLD’S FAIR. Without hesitation Elvis sent a check of $50.000 in order not to disappoint his countrymen. Kudos to Elvis! Most big stars, with a fat bank-account, should follow Elvis’ example.” 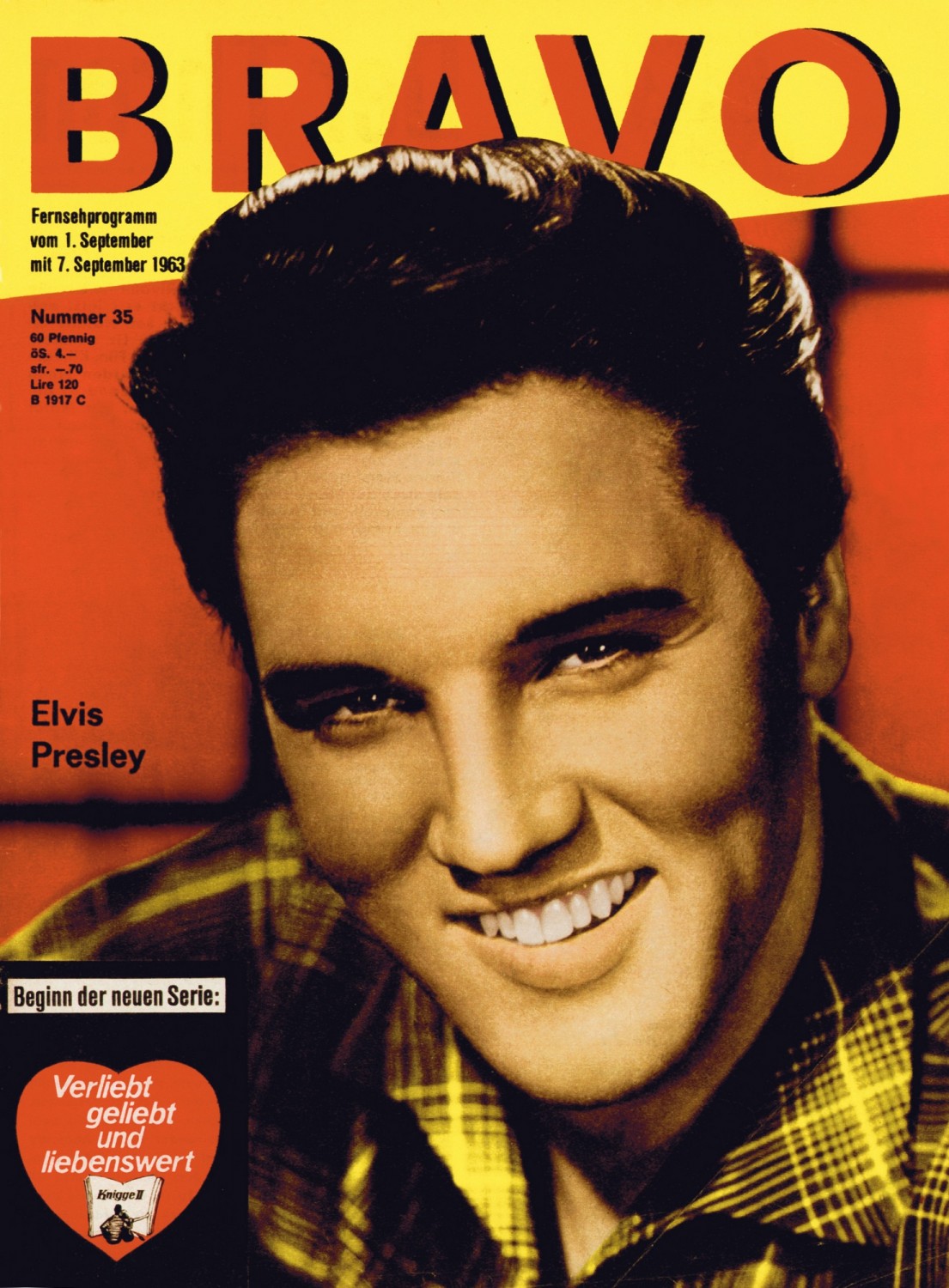 Here we have Elvis’ only BRAVO-cover in the year of 1963.

The photo on the cover is 5 years old (dating back to the ’58 King Creole photoshoot), and it almost seems to serve the purpose of bringing back some of the memories of days gone by (when Elvis Presley was changing the face of showbusiness).

This issue also had a half-page article devoted to Elvis and Ann-Margret that I don’t have myself (and therefore cannot present in this topic).
If anybody, who owns this magazine, is willing to share this article, that would be very much appreciated! 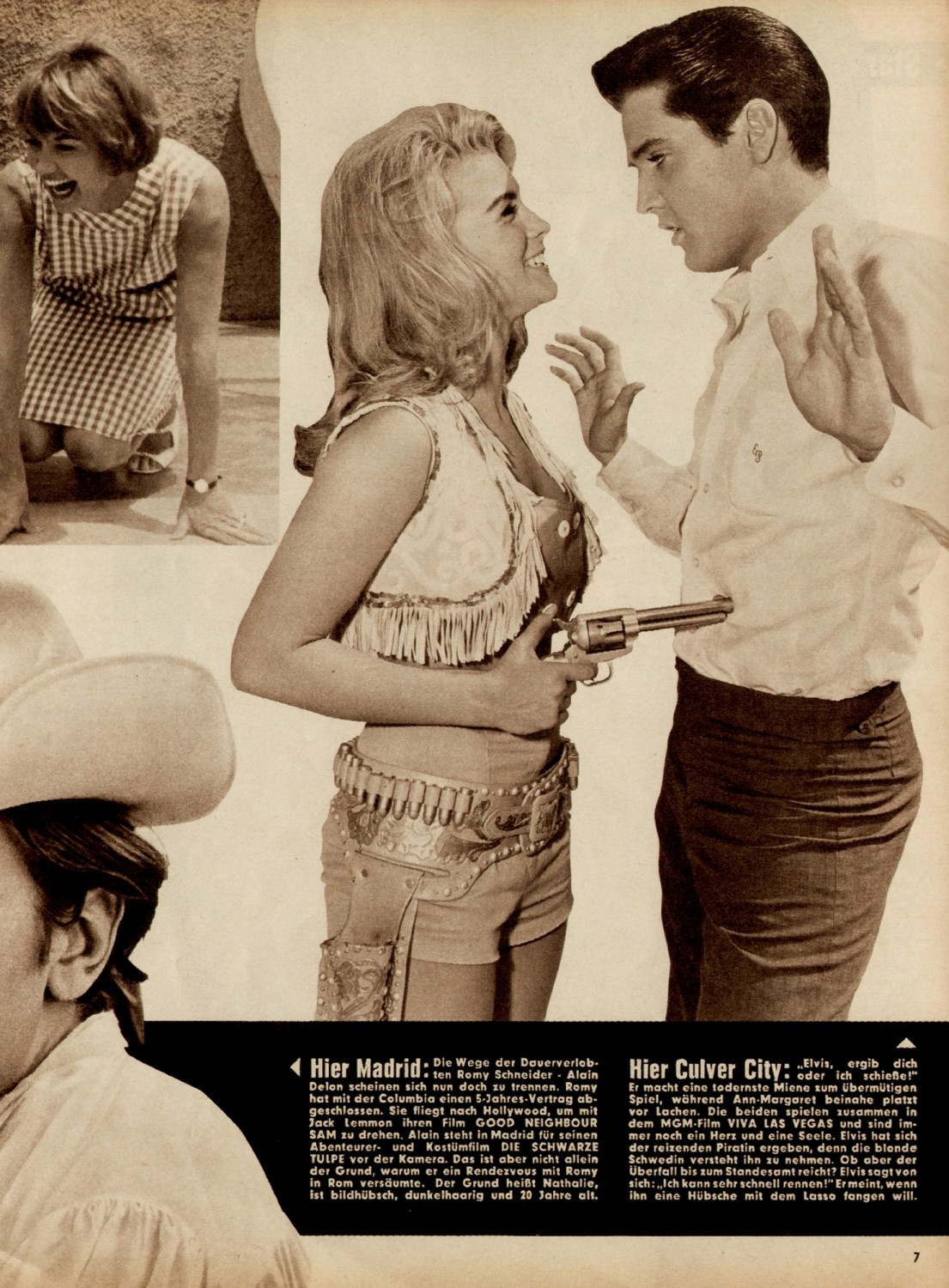 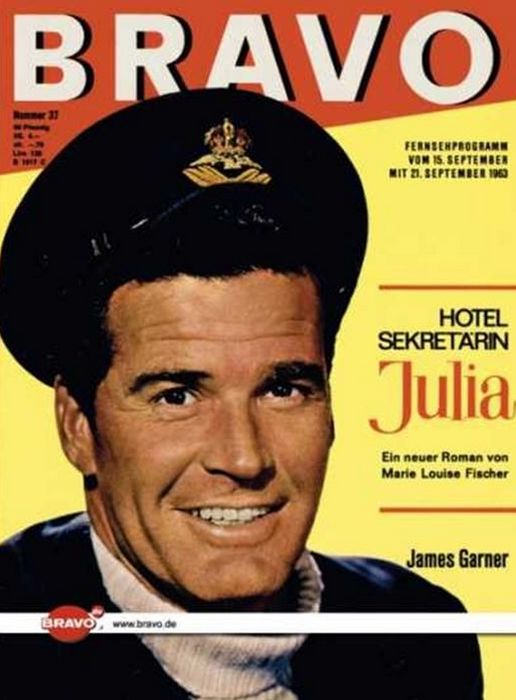 CULVER CITY REPORTING:
“Elvis, surrender or I’ll shoot!”. He is deadserious, while Ann-Marget can’t keep from laughing. Both are starring in the MGM-film VIVA LAS VEGAS and are still one heart and one soul. Elvis has surrendered to the gorgeous blonde from Sweden. But will her tactics be enough for Elvis to marry her? Elvis about himself: “I can run very fast”. He is referring to any handsome lady who tries to tie him down.” 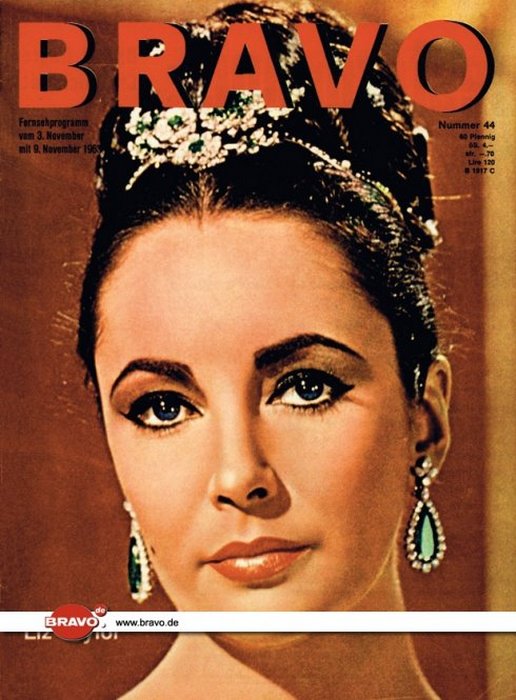 In this issue we find the second two-page article of the year. The article is an addition to the BRAVO-series “Star Von Heute” (“Star of today”), in which a short lifestory of the star in question was given.

STAR OF TODAY: ELVIS PRESLEY, THE TROUBADOUR FROM MEMPHIS
The article mainly focuses on Elvis’ early years, and in a romanticized way we learn how his investment of those $4 at Sun Records had opened the door to becoming the biggest star in showbusiness. 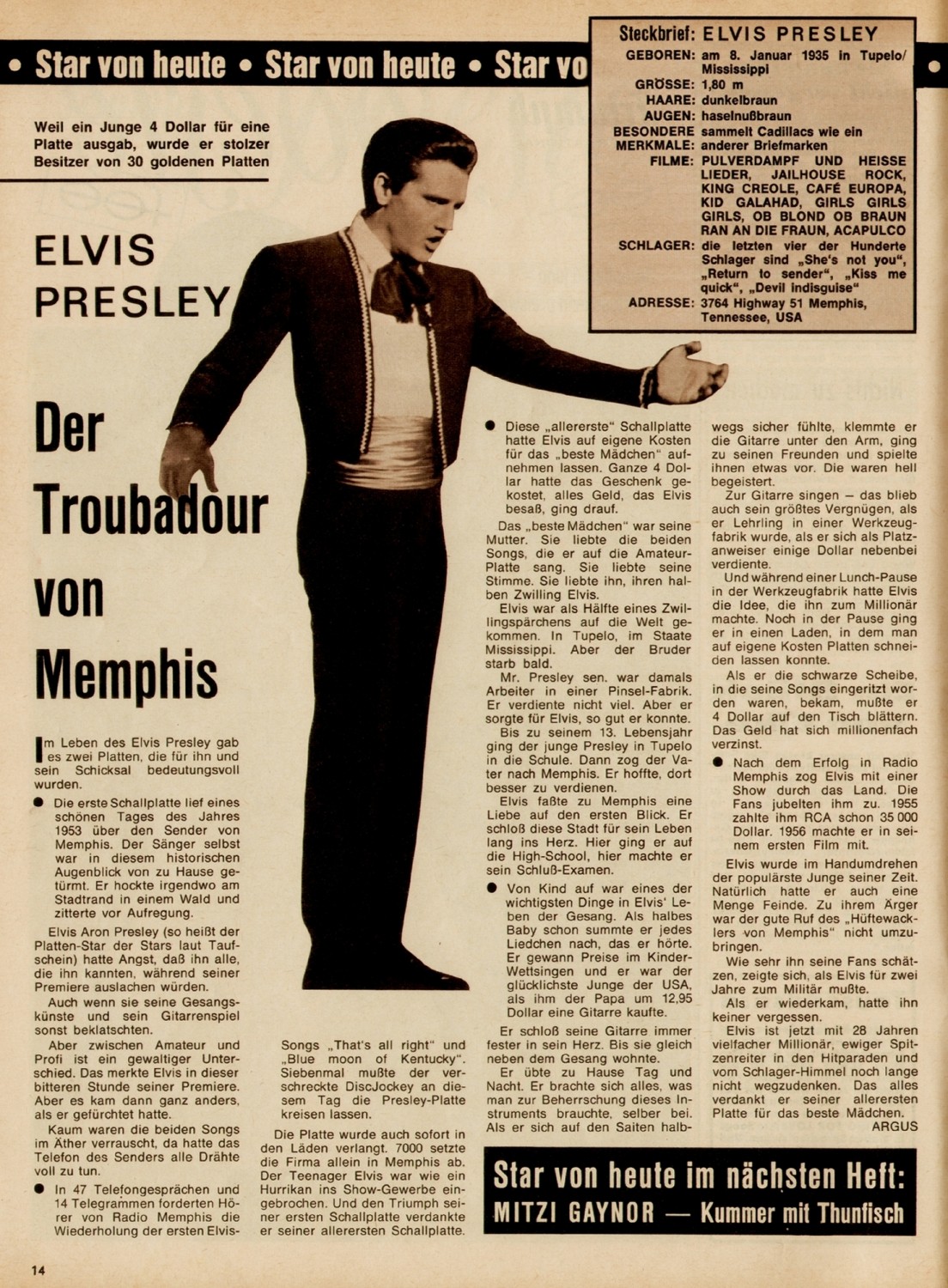 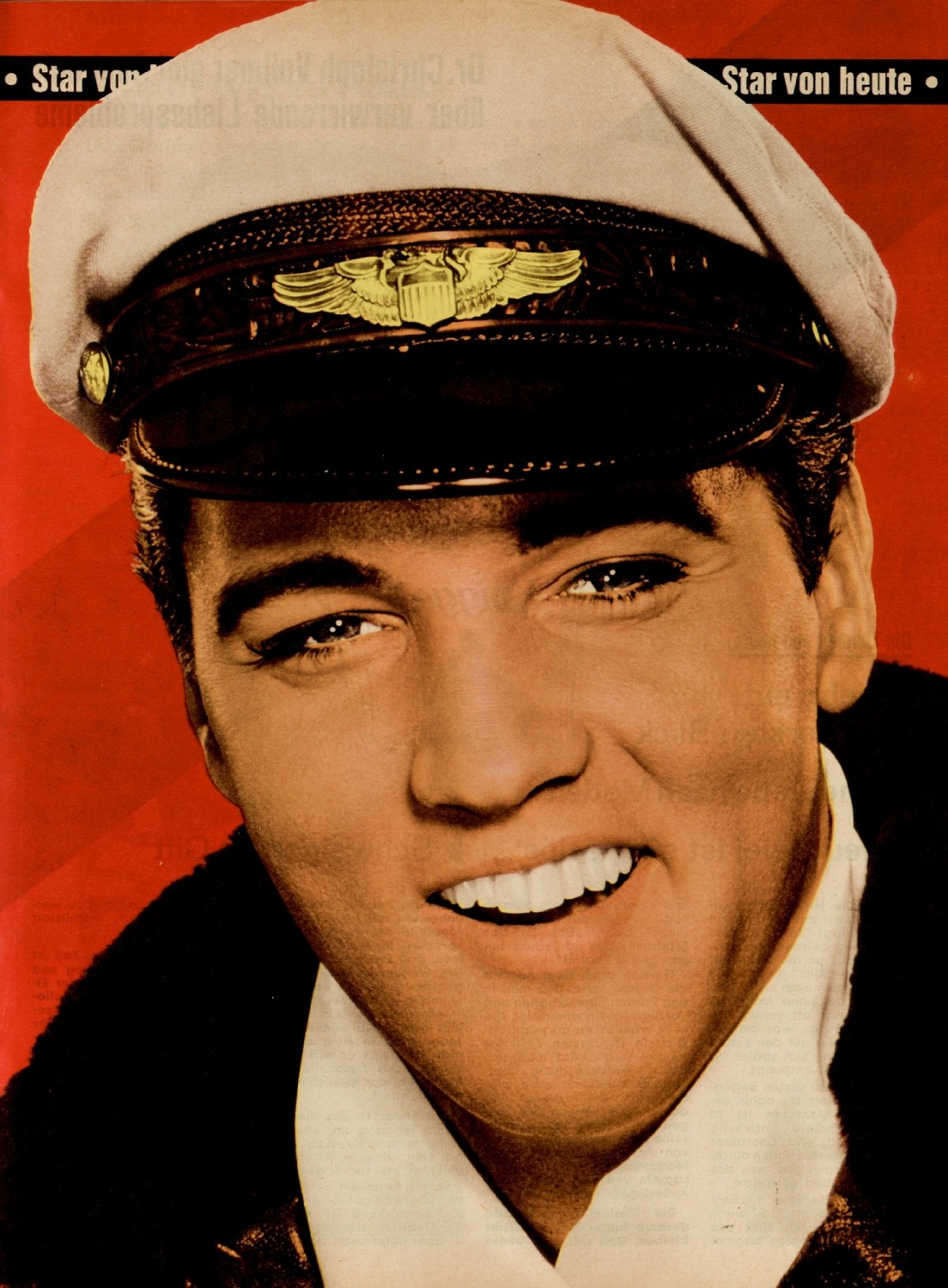 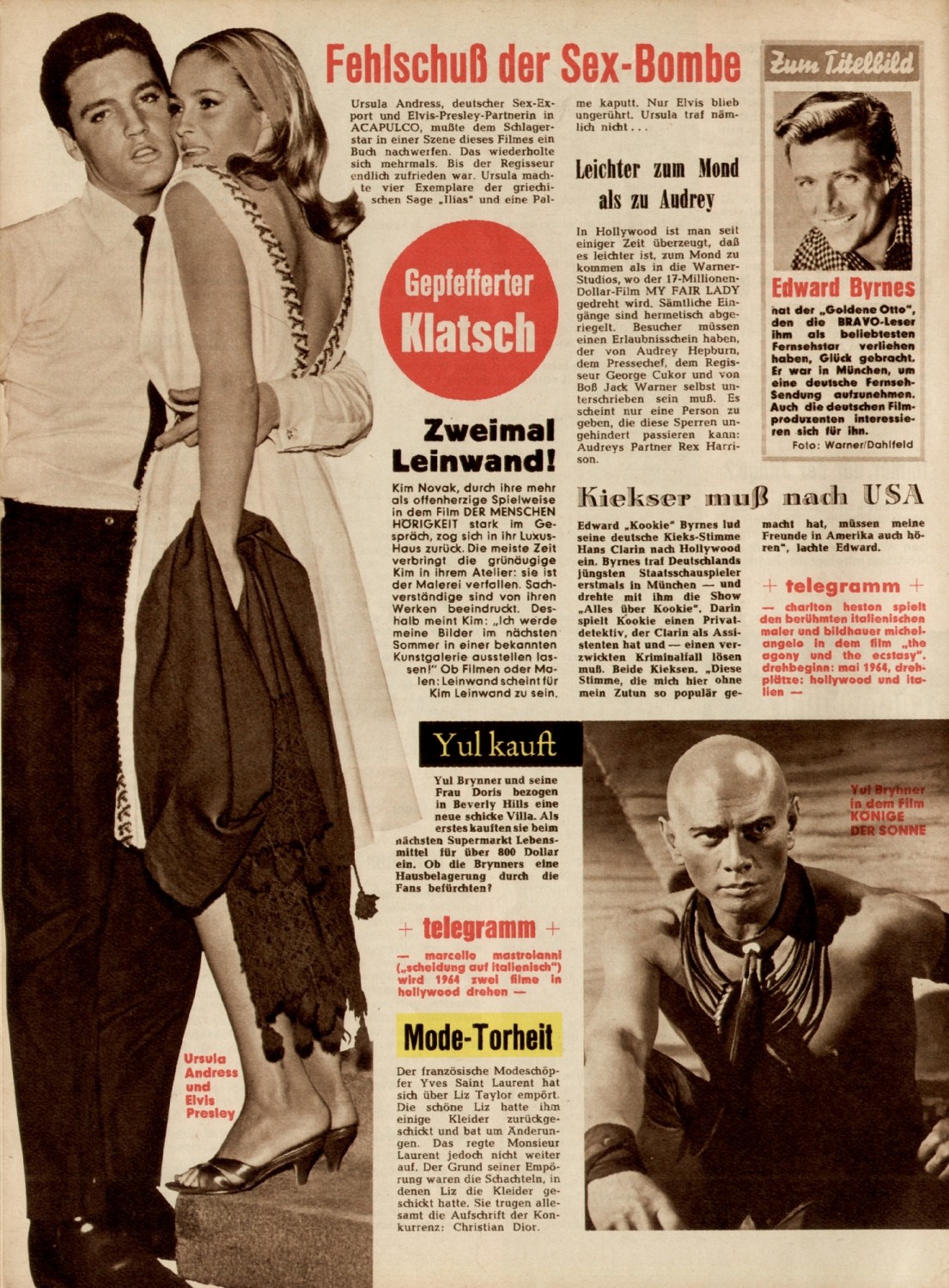 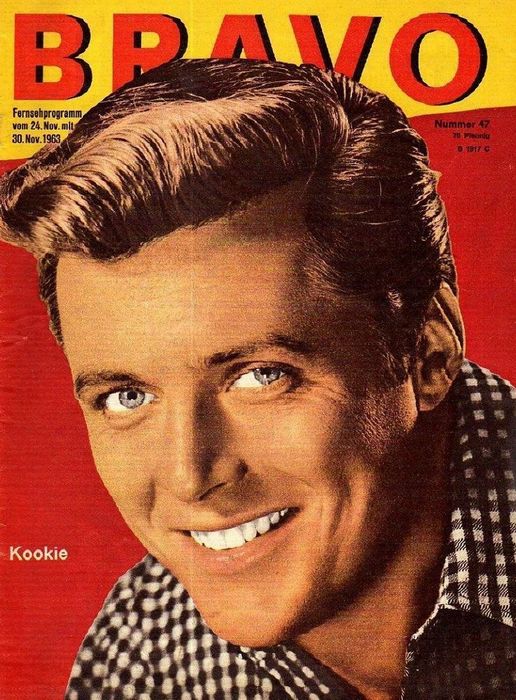 SEX-BOMB MISSES TARGET
“Ursula Andress, German sex-export and Elvis Presley’s co-star in FUN IN ACAPULCO, had to throw a book at Elvis in this movie. This had to be done a few times, until the director was finally satisfied. Ursula destroyed 4 copies of the Greek saga ‘Ilias’ and a palmtree. Elvis remained unharmed. Ursula missed on all occasions …”