“Don’t It Make You Want To Go Home” 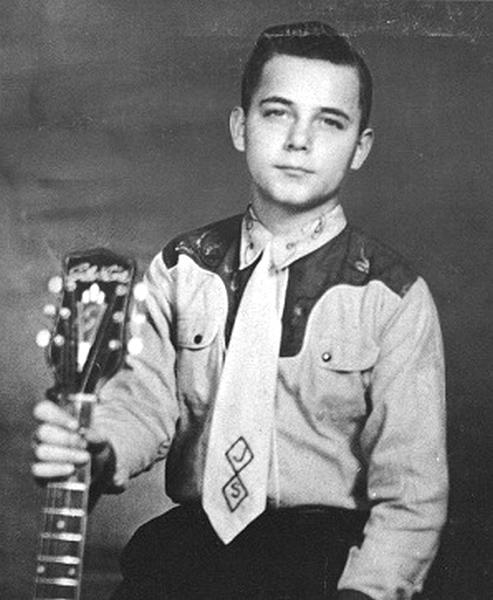 Even though Joe South won the Grammy Award for Song Of The Year in 1969 with Games People Play, he is best known for his amazing writing skills. Among the songs he wrote and that became million sellers for others, are Down In The Boondocks, Hush and the smash I Never Promised You A Rose Garden. Also Gene Vincent, Johnny Cash, Jerry Lee Lewis, Glen Campbell, Andy Williams, Bill Haley, Waylon Jennings, Don Gibson, Brenda Lee and Dolly Parton all recorded songs that were written by Joe South.

In 1970, Elvis released a live version of Walk A Mile In My Shoes, a Joe South song that was regularly on Elvis’ setlist that year. But there is another song by Joe South that Elvis must have liked very much since he sang (parts of) the chorus of this song on at least three occasions during rehearsals in July 1970: the beautiful Don’t It Make You Want To Go Home.

In this article we take a look at one of Joe South’s lesser known works of art, Elvis’ three one-liners of this song, and the cover version that comes closest to how Elvis’ rendition of it might have sounded like if he had recorded it. 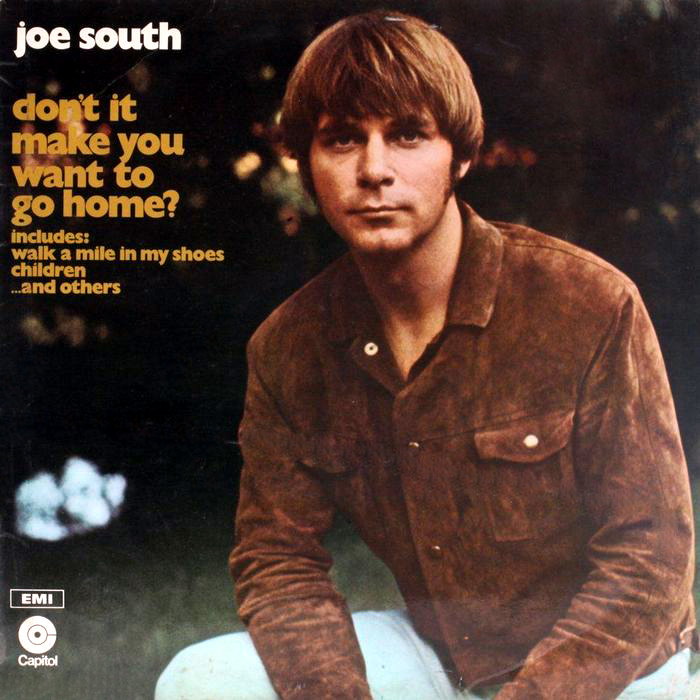 Don’t It Make You Want To Go Home was released as a single in August 1969. Earlier that year, Joe had scored his biggest hit to date with the protest song Games People Play, which went to number 12 on the Billboard chart.

Don’t It Make You Want To Go Home was a minor hit for Joe, reaching number 41 on Billboard. It also became the title tune of his latest album, released in January 1970. This LP not only featured Joe as a songwriter and performer, but as a producer and arranger as well. Walk A Mile In My Shoes, the second single from this album, reached number 12 on the Billboard chart, equalling the chart success of Games People Play.

Don’t It Make You Want To Go Home is about the strong desire to leave the future behind and reconnect with the past, only to find out that the past has drastically changed. Listen to this amazing song below.

Oh, the whippoorwill roosts on the telephone pole and the Georgia sun goes down
Well it’s been a long time but I’m glad to say that I’m goin’ back down to my hometown
Goin’ down to the Greyhound Station, gonna buy me a one-way fare
If the good Lord’s willin’ and the creeks don’t rise, watch it for I’ll be right there 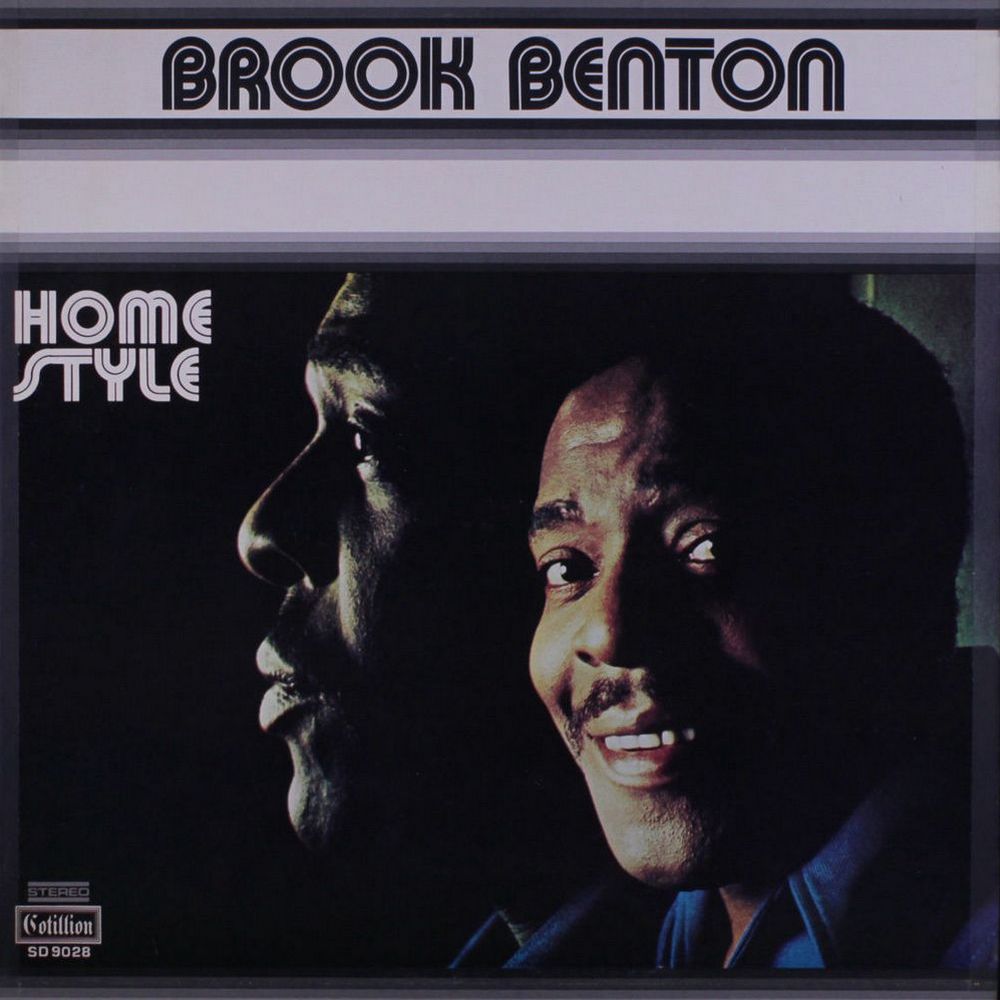 The first cover of Don’t It Make You Want To Go Home that entered Billboard’s singles chart, was Brook Benton’s version, in May 1970.

Brook’s version of the song is a far cry from the original. His voice, the musical arrangement, and the prominent female background singers, give a whole new meaning to the song. Brook’s unique style of singing practically turns the song into a religious tune, only further emphasised by the background singers that basically serve as a gospel choir. Probably not exactly what Joe South had in mind when he wrote the song, but Brook’s version of it seems like a perfect choice for the holiday season!

Brook’s single, re-titled Don’t It Make You Wanta Go Home, reached number 45 on the Billboard chart and it was included on his Home Style album, released in August 1970. Listen to his rendition of the song below.

In July 1970, Elvis was rehearsing for next month’s Vegas season. Some of these rehearsals were filmed by MGM as part of their upcoming documentary Elvis: That’s The Way It Is. Throughout these rehearsals, Elvis was in an extremely good and often very funny mood.

During the rehearsals, Elvis sang quite a few one-liners of well known songs. Don’t It Make You Want To Go Home was one such song. Elvis actually sang tiny bits of this song on at least three separate occasions.

The first occasion, which can be heard below, took place on July 24, 1970 at RCA Studio’s in Hollywood, California. During this segment, Elvis’ drummer goes for a break, to which Elvis remarks “Gotta go to the bathroom Ronnie?”. Seconds later and just killing time, Elvis sings the first two lines of the chorus, which is followed by “Don’t it make you wanna go to the bathroom?”.

The second time Elvis sang part of Don’t It Make You Want To Go Home, was five days later, on July 29, 1970, during rehearsals at MGM’s own studio in Los Angeles, California.

While Charlie Hodge and Elvis are searching for the correct lyric sheet on Elvis’ music stand, Elvis softly starts to sing Don’t It Make You Want To Go Home, as can be heard below. He almost makes it to the end of the chorus this time, and this is the longest of the three one-liners. Toward the end of this segment, we can hear the intro of the Beatles’ song Something.

The third and final occasion Elvis sang a few words of the song, also took place on July 29, 1970, at MGM. As we can hear in the link below, and similar to the second occasion, Elvis softly sings the opening line while searching for a lyric sheet, in this case I Just Can’t Help Believin’.

Listening to the three sound bites, it seems clear that Elvis must have really liked the song. Sadly, he never officially sunk his teeth into it. Had it been written only a few months earlier, Don’t It Make You Want To Go Home would have fitted the American Sound sessions like a glove, but also in 1970, Elvis would certainly have done a good job on this fine tune.

That same year, however, Elvis did release another strong Joe South song, which dealt with social intolerance, Walk A Mile In My Shoes, if only in a typical full orchestral live variation and not as a studio recording. 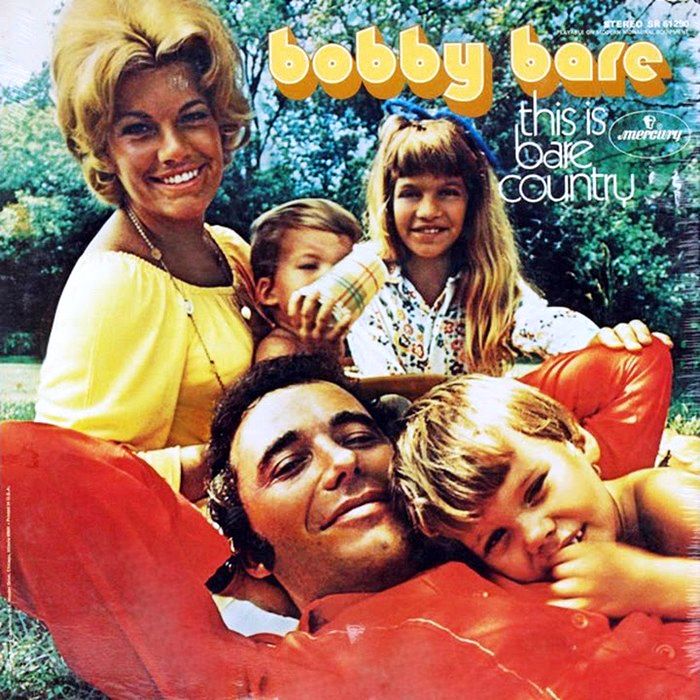 Bobby Bare covered Don’t It Make You Want To Go Home in August 1970 on his album This Is Bare Country, which was Bobby’s first LP on the Mercury label after he had left RCA Victor earlier that year.

In 1958, Bobby wrote and recorded The All American Boy, a song about Elvis in which Elvis’ name is not actually mentioned. It went to number 2 on the Billboard chart in February 1959, but it was credited to (and lip-synced on TV by) Bill Parsons. Bobby himself was in the army around this time.

Bobby’s version of Don’t It Make You Want To Go Home is a full minute shorter than the original (lasting 2:21 compared to the 3:16 of the original) as a result of the chorus being repeated only once at the end and not four times. His magnificent version of the song is pure class and probably comes close to how Elvis’ rendition would have sounded like if he had recorded it. 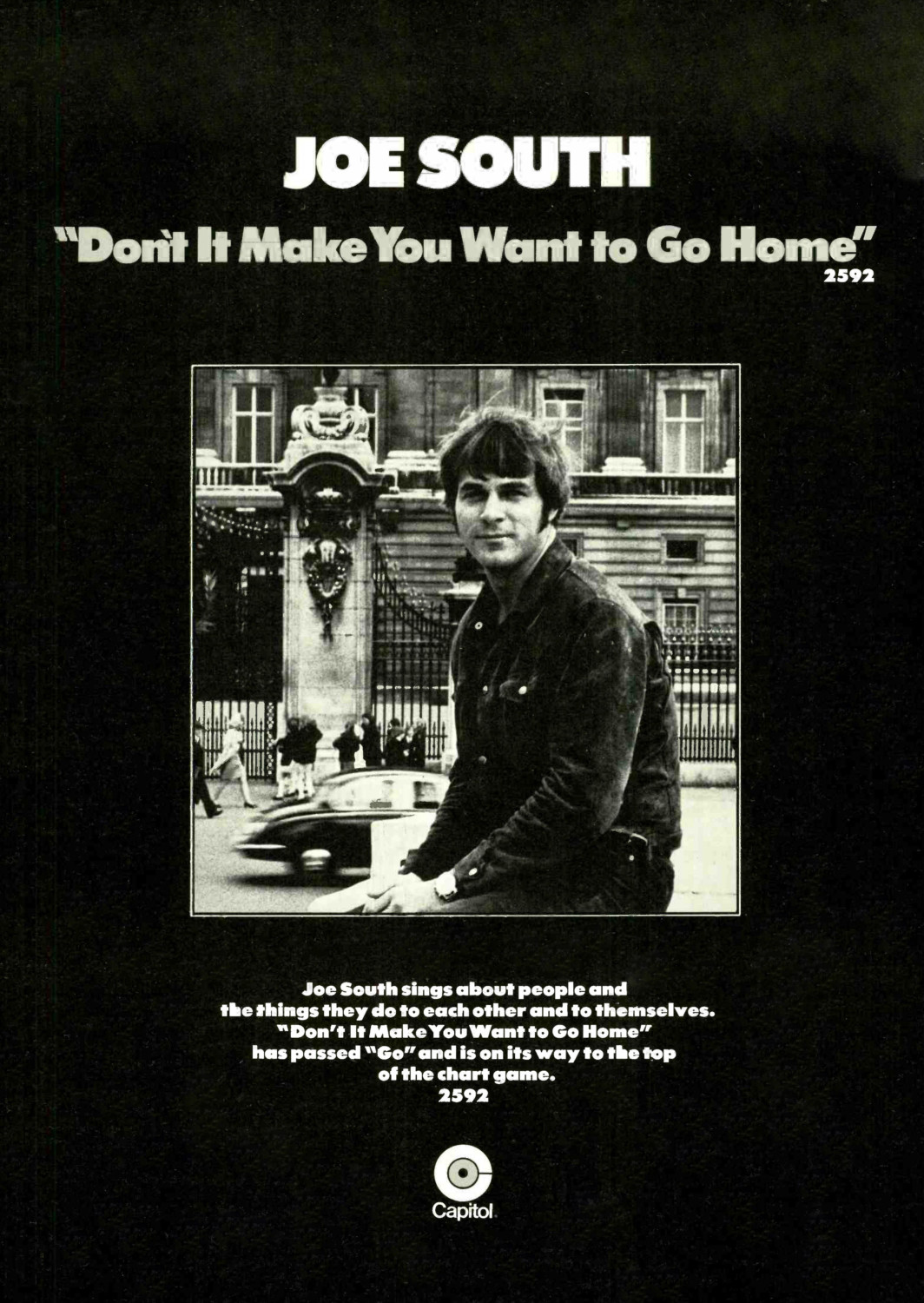 * Joe South’s original version is available on the CD variation of the vinyl album, as well as on every CD compilation of Joe’s output.

* Brook Benton’s cover of the song is available on the CD variation of his Home Style album.

* Bobby Bare’s version can be found on the brilliant 3 CD set The Mercury Years, as released by Bear Family in 1987.

For detailed information about Elvis’ rehearsals for the That’s The Way It Is documentary, please visit this page of Keith Flynn’s incredible website.