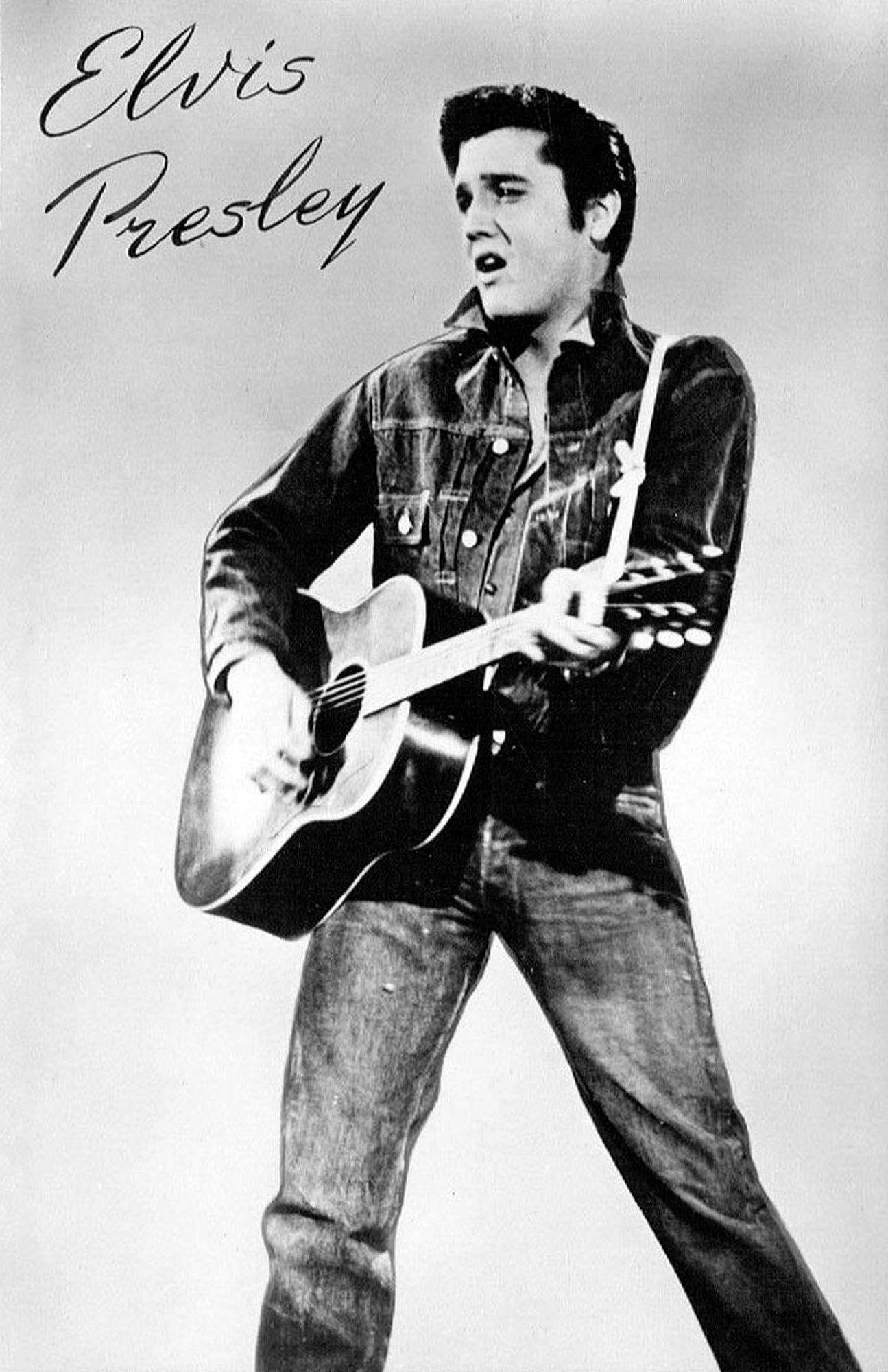 A sunny sunday afternoon in Amsterdam, back in the year 1959. Hundreds of young kids line up outside of the Odeon Cinema. Playing that afternoon is Loving You. In line with me, waiting to buy tickets, are my father and my brother. Our dad is probably the only adult in the crowd!

That weekend we stayed with family living outside of Amsterdam. They were farmers. By sheer luck, during breakfast that sunday morning, my brother noticed a tiny ad in the newspaper’s film-section for Loving You. He and I both idolized Elvis, but we never have had the chance to see any of his four films up till then. Our dad offered to accompany us on the one hour bicycle journey from the farm back to Amsterdam. We didn’t own a car. My parents, both working full-time, 6 days a week, could not afford the luxury of a family car. Hardly anybody working class owned a car in those days. 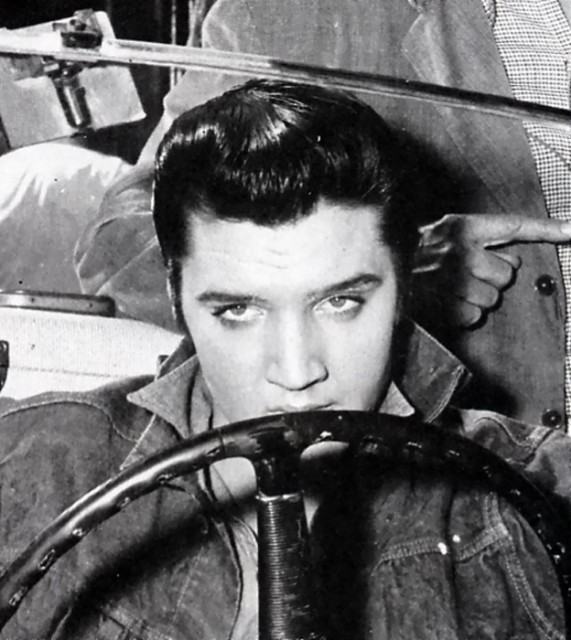 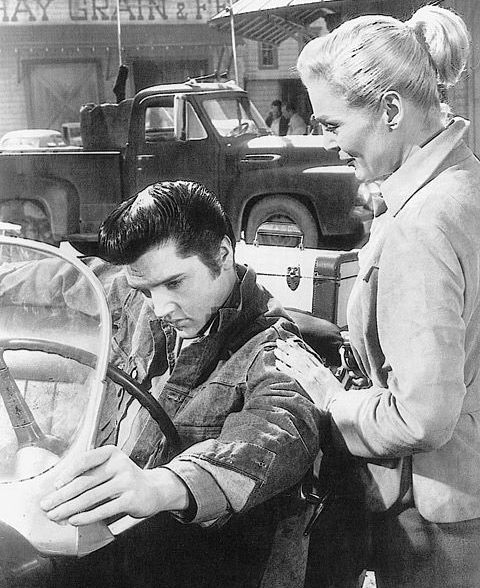 Paralysed
The theater was packed that afternoon. When finally, after several cartoons and a 15-minute documentary about the Papuas in New Guinea, the main attraction started … I was glued to the big plush chair while Elvis’ hiccup hot patato vocal on the title song totally paralysed me.
The moment he drove onto the screen in that weird little automobile, he looked like a visitor from another planet! His fantastic quiff and sideburns, the denim shirt, the faded jeans. Nobody looked as fantastic as Elvis did back then, it was unreal! I was 7 years young and in love for the time. 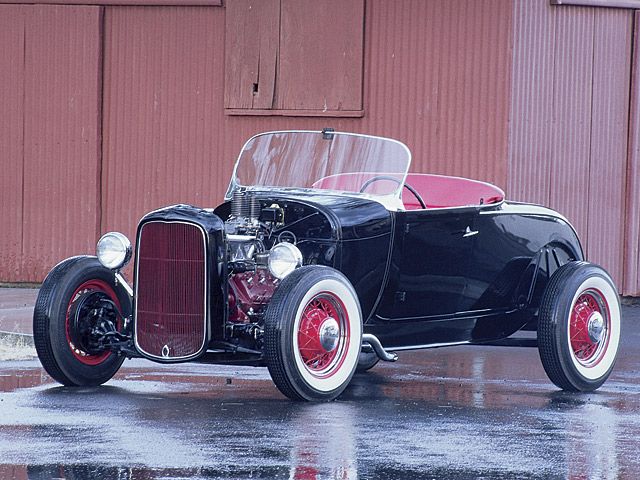 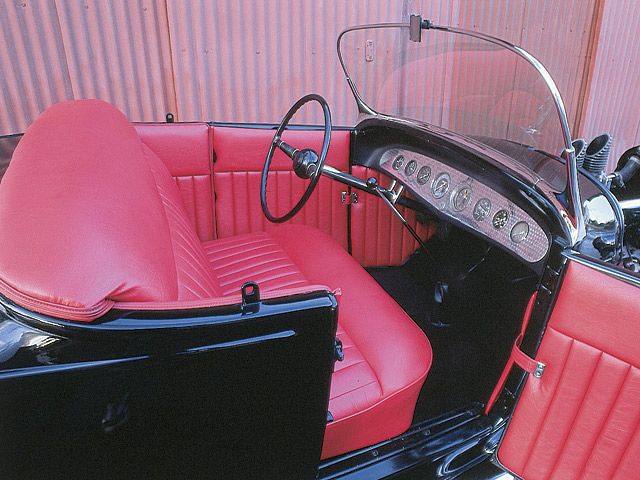 Hot rod, cool rod
The Hot Rod, as seen in Loving You, dates back to the late 1930’s and was build by one John Athan from Southern California. In 1996 the car was restored to its original looks and is currently on display at the NHRA Museum in Pomona, California. 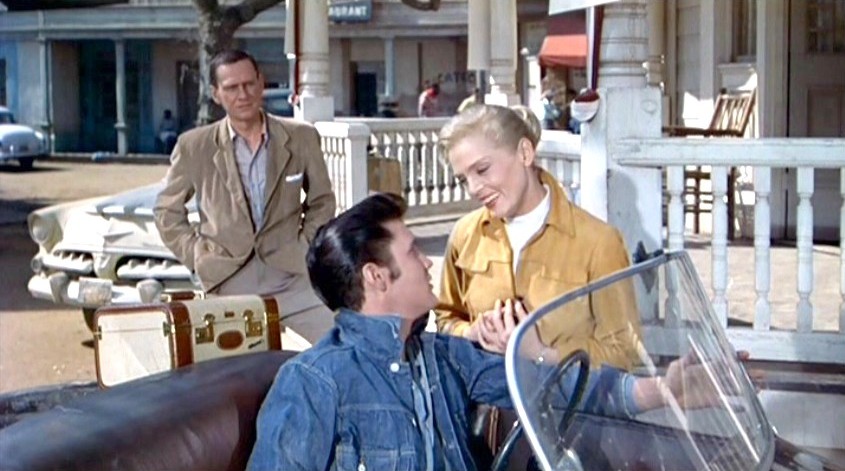 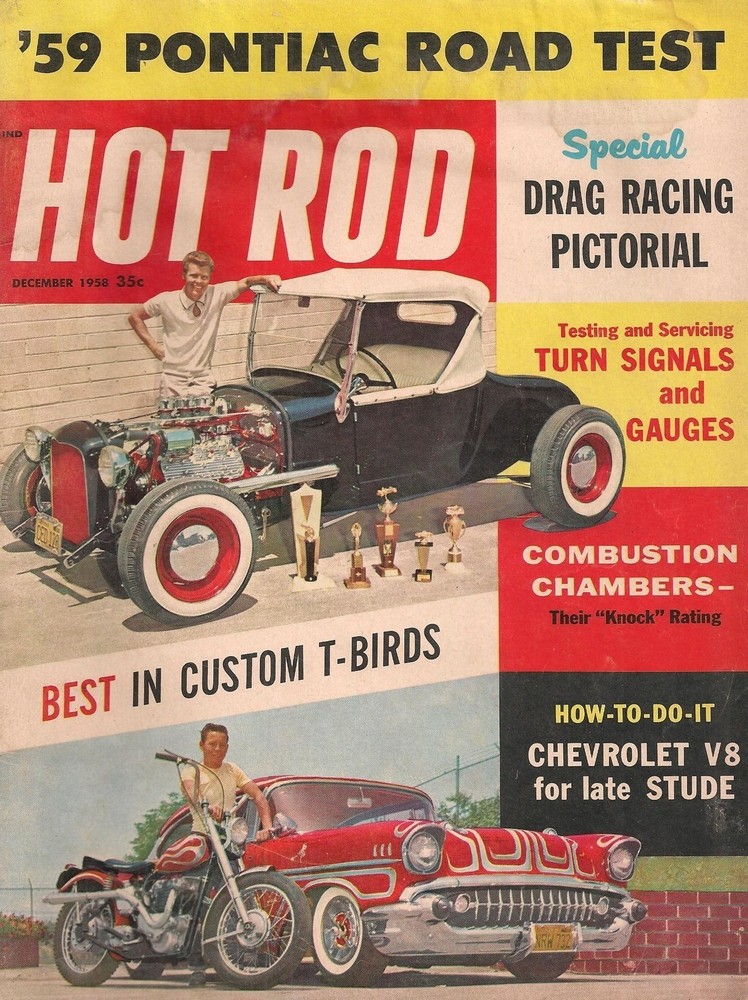 I know nothing about carburators, chassis or V-8 engines myself, but if you would like to know more about the history of this classic little automobile, please click the following link:
THE ELVIS HOT ROD 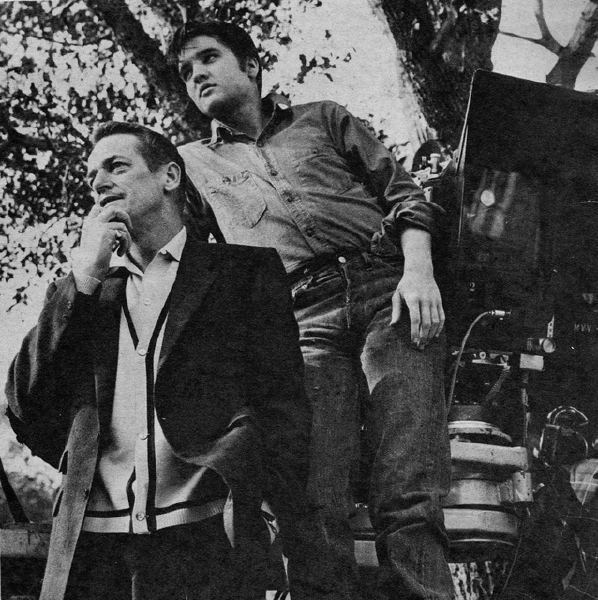 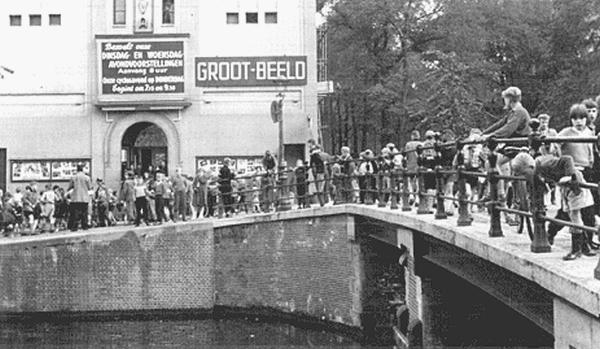 Kids in late 50’s Amsterdam, waiting for the cinema doors to open. 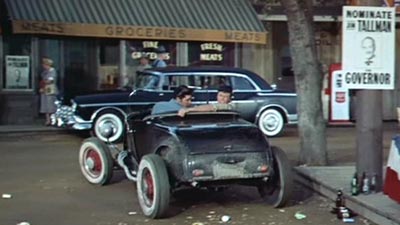 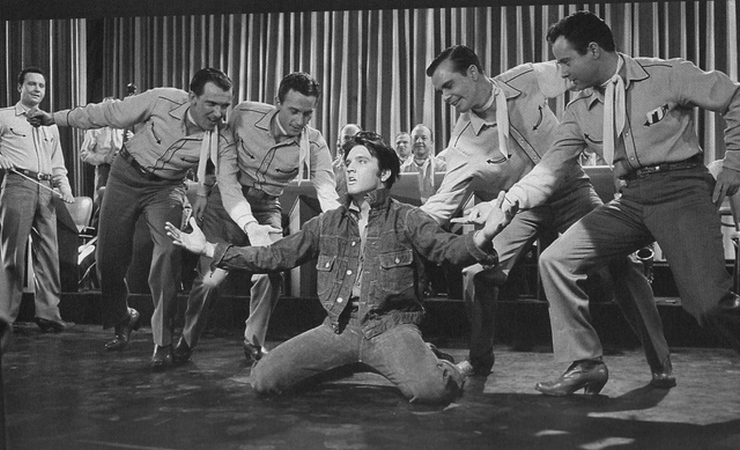 No doubt about it, it was James Dean in Rebel Without A Cause (1955) who had popularised Blue Jeans with the teen crowd of the day. But I didn’t know who Dean was back in the 1950’s. It was Elvis (as Deke Rivers in Loving You) who would forever change my taste in clothes. I was determined to get me a pair of Jeans, and a denim jacket to make the picture complete! But that was easier said than done. Back then no American made Jeans were available in Amsterdam. Only cheap looking imitations were sold. My mom agreed to go shopping with me one Saturday afternoon after she had finished her work in a grocery shop that was owned by her brother. We travelled by tramcar to the centre of the city. I remember being all excited with the idea of showing the (still to be bought) Jeans to my schoolmates the following monday …
At home I had shown my mom a picture of Elvis from Loving You, cut out from a copy of a popular Belgian weekly titled Piccolo. It showed him in the full denim outfit on his knees on stage. My hero! 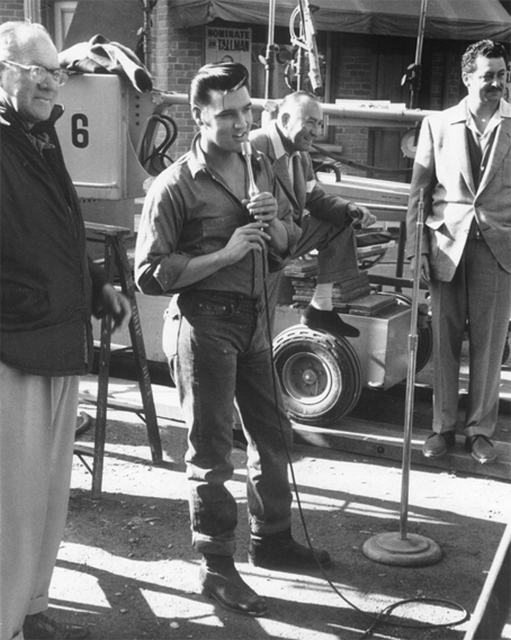 After a short walk we would arrive at Peek & Cloppenburg on the corner of the Kalverstraat and The Dam: “Men’s Clothes For All Ages”. Mom explained to one of the shop assistants she was looking for a pair of Blue Jeans to fit my size. “Ah, yes, very popular with the kids of today!”, he replied.

After a few minutes he returned with a stack of Blue Jeans that actually turned out to be Green Jeans. “See, it’s got nice back pocket zippers and a silver colored Sheriff star dangling from a front pocket zipper to match”. “But they are Green Jeans ….”, I stuttered. “It’s the only color in stock”, the assistant replied a little irritated. I did like the zippers and the shiny silver Sheriff-star alright, so I gave in rather quickly. My mom paid the lady behind the counter and we left the shop.

“You like ’em, doncha?”, mom asked on our way out. “Well yes …, they don’t look like the Jeans Elvis has, but he would surely have liked a Sheriff-star attached to his Jeans! And he plays a cowboy in one of his other films, did you know that?”. My mom smiled and we walked into the direction of an Ice cream parlor to celebrate my first pair of Green Blue Jeans …

Below the original jacket, shirt and boots used for the movie.

Both the jacket and jeans were manufactured by Levi’s. The best in denim design. 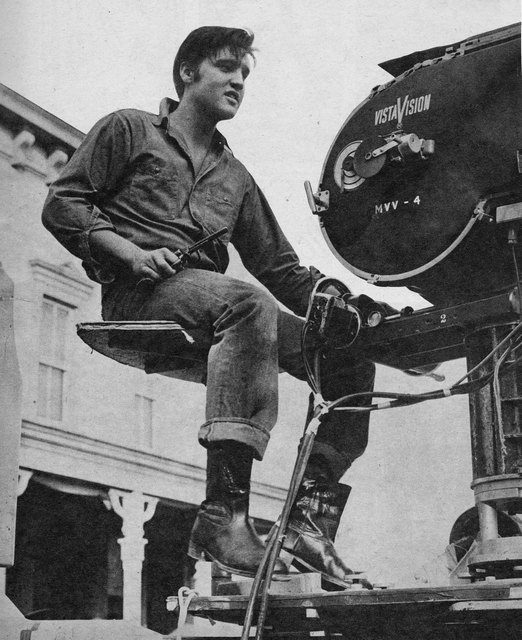 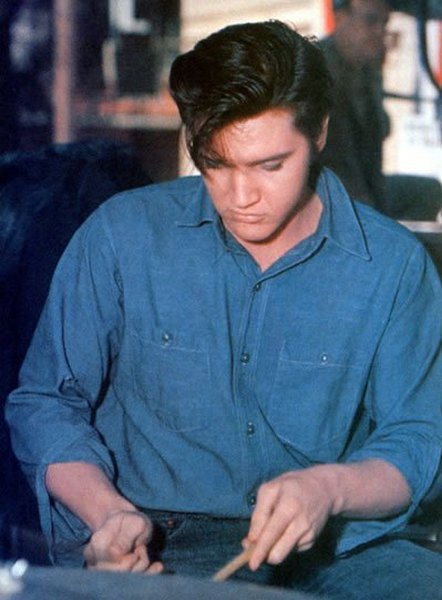 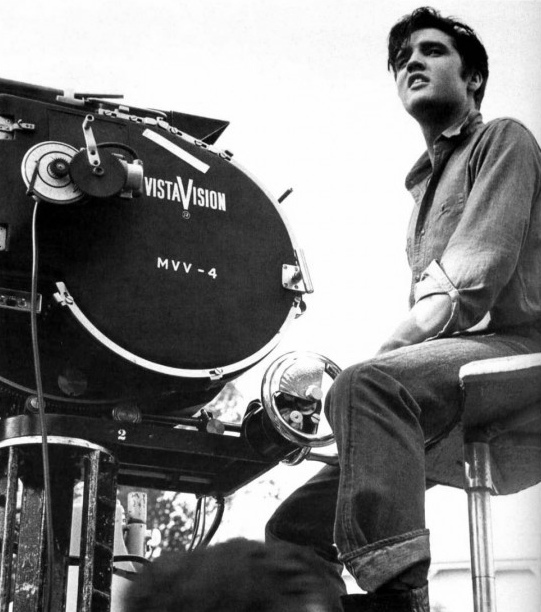 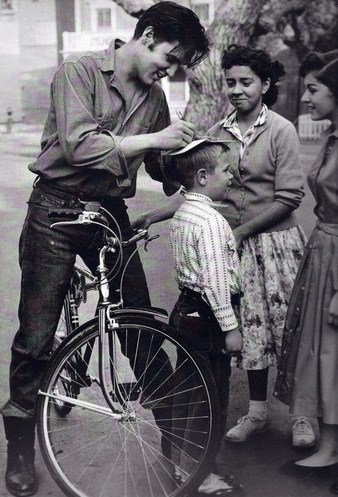 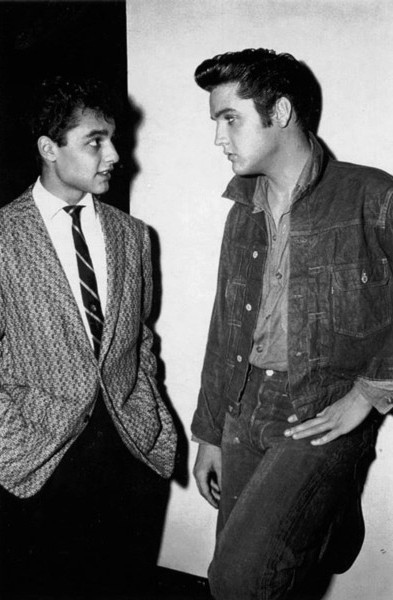 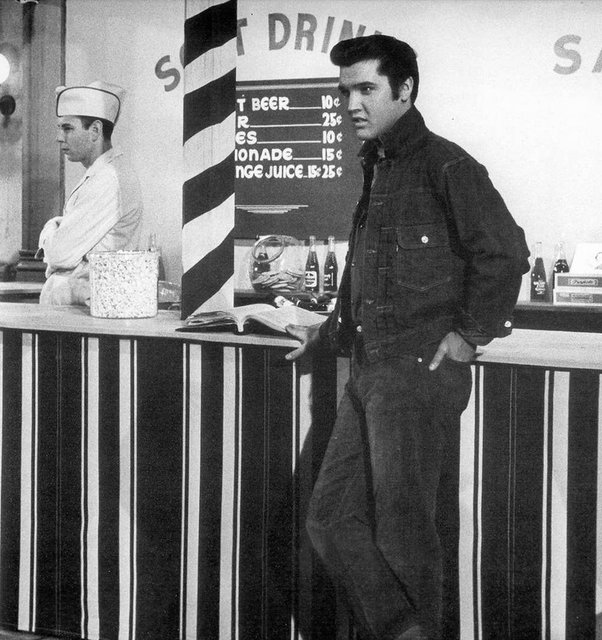 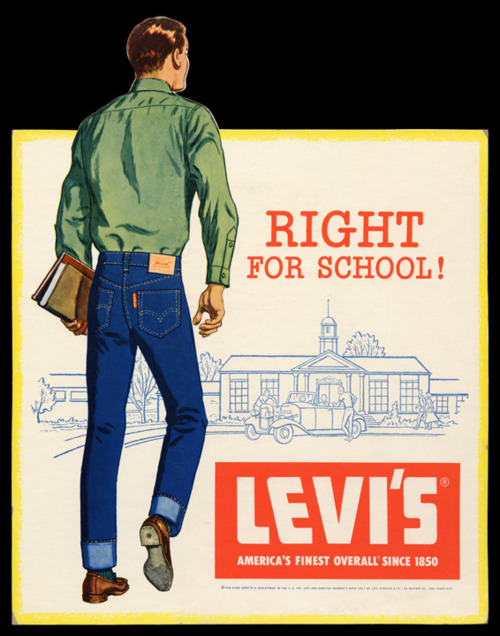 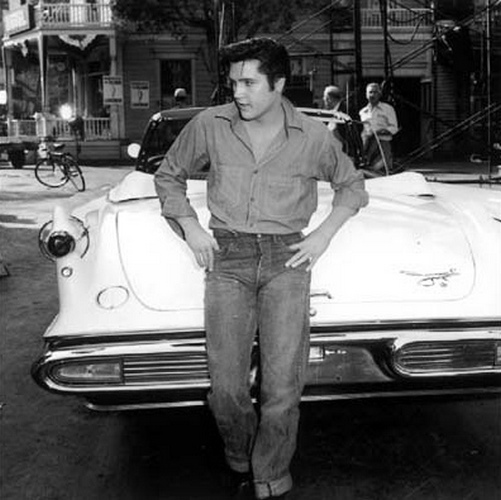 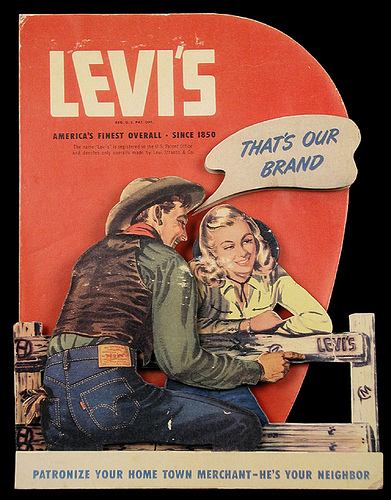